Win Warrior on Blu-ray by looking inside this internet page

Here's your chance to win officially the sixth best film of 2011 on spangly Blu-ray: three copies of Warrior are up for grabs. And punches. And crotch-punches. And kicks. And face-kicks. 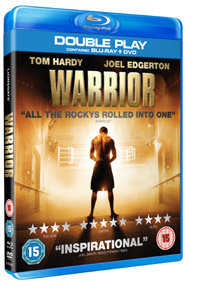 Sometimes, you know a film is going to be awesome, then it is awesome, and you go home satisfied. Sometimes, however, it's far more exciting to go and see a film which you think will be average, then double-over in sheer joy as it sucker punches you in the guts with its quality. Warrior performed such an assault on my person: I was expecting "All the Rockys rolled into one!" but I actually got something good.

Warrior is out on Blu-ray and DVD on February 20th, courtesy of Lions Gate Home Entertainment, but if you're smart, you'll click here to enter our competition to win it on Blu-ray. Because you have nice hair and a non-threatening voice, I'll let you win.

Here's the trailer, in case you forgot what Tom Hardy looks like.

More:  Warrior  Tom Hardy  Joel Edgerton  Nick Nolte  Jennifer Morrison  Competition
Follow us on Twitter @The_Shiznit for more fun features, film reviews and occasional commentary on what the best type of crisps are.
We are using Patreon to cover our hosting fees. So please consider chucking a few digital pennies our way by clicking on this link. Thanks!