It's the news literally three of us have been waiting for: Mrs Doubtfire is finally getting a sequel, 21 years after the original terrified an entire generation. Join me as I speculate on the various different directions returning director Chris Columbus can take Mrs Doubtfire 2. 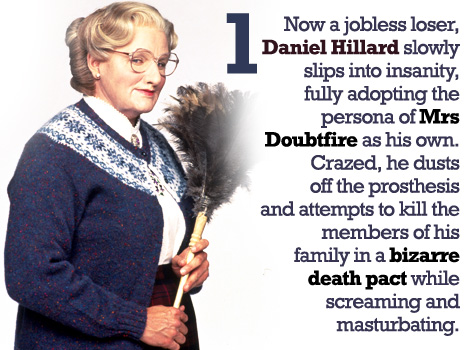 It's quite difficult to find the words to describe this news. Mrs Doubtfire always seemed like one of those mad, mid-90s movies that was commissioned on cocaine without anyone actually thinking it through properly. I mean, a desperate man dresses up in expensive prosthetics and adopts the persona of an old Scottish housekeeper in order to spy on his kids? It's a stunt even Fathers 4 Justice would consider 'a bit much'.

Nonetheless, by some impossible fluke, it ended up being moderately entertaining. We all had fun back in '93 screaming "HELLOOOO DEEEEARY!" in the playground and all marvelled at Robin Williams' ability to accurately throw a lime at a pre-Bond Pierce Brosnan's head. Everyone agreed that the film was a monstrous mistake but we all had a good laugh at its expense, safe in the knowledge that it was history now and Mrs Doubtfire couldn't hurt us any more.

We were wrong. Mrs Doubtfire made $441 million worldwide. That's almost half a billion dollars. And even if Hollywood's execs didn't know it at the time, that kind of success can't be written off as a fluke in today's industry. Hence, the necessity of Mrs Doubtfire 2: a decision that feels like it was made - no, calculated - by a computer algorithm scanning the Twentieth Century Fox profit/loss columns. No human in their right mind would sign off on this. Think of the children. 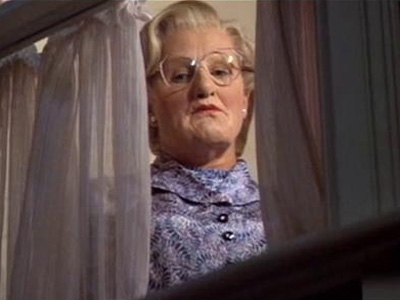 
I will accept a Mrs Doubtfire sequel if the following conditions are met:

- Robin Williams' character Daniel Hillard acknowledges the fact that he was taking a lot of drugs back in 1993 and most of the events of the first film never actually happened.

- Daniel Hillard makes his girlfriend wear the Mrs Doubtfire mask during sex. "It just gets me where I need to be!" he should say, before doing an impression of, I don't know, Daffy Duck or something.

- Hillard's new 'disguise' is actually a giant robot with a Scottish accent called MECHA-DOUBTFIRE. This should not be explained.

- The Aerosmith song 'Dude Looks Like A Lady' is deleted.

The chances of these demands being met are about as likely as it was that Mrs Doubtfire would get a sequel in the first place, so don't try and tell me I'm wasting my time.

More:  Mrs Doubtfire  Robin Williams  Chris Columbus  Wait What
Follow us on Twitter @The_Shiznit for more fun features, film reviews and occasional commentary on what the best type of crisps are.
We are using Patreon to cover our hosting fees. So please consider chucking a few digital pennies our way by clicking on this link. Thanks!