10 sensible suggestions for the cast of The Expendables 2

Despite the ageing process, it looks like geriaction movie The Expendables 2 is moving forward slowly, infuriating younger movies by blocking their way like lumbering old men tend to do. Alleged new cast members John Travolta and Chuck Norris don't spread our mustard, so we came up with some better ideas and faxed them to Sylvester Stallone.


I kind of dug the first Expendables movie; it was a fun throwback to a more innocent time, when muscled American heroes could slaughter foreign-looking henchmen without worrying about whether or not they were protected by the UN, thank you very much Ban Ki-moon. Also, as a human male, it was hard-coded in my DNA that I'd go see it - I woke up on the morning of release with a ticket already in my hand. Stupid glands.

Anyway, according to studio head David Varod, the cast of The Expendables 2: Geriatric Boogaloo has been bolstered with the addition of John Travolta and Chuck Norris. Yeah, that's right: these two guys. 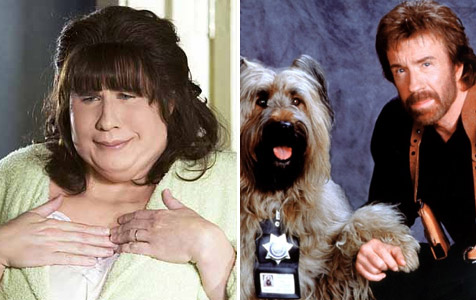 Frankly, we say Sly can do better. Before he embarks on a great quest to enlist the help of every major action star of the last 140 years (ensnaring them with his enchanted chequebook), we say there are far more worthy faces he should be recruiting, none of whom co-own restaurants with him.

Believe it or not, Carl Weathers had a career before he appeared in Arrested Development. A fully-fledged action hero in his own right (ACTION JACKSON COUNTS AND IT ALWAYS HAS), he'd be right at home in Camp Expendables. It'd be worth having Weathers in the movie purely for the reunion with Arnie and the shockwave that'd result from their bicep-flexed handshake. As a black guy, however, we fear he'd be more expendable than most.
Bolo Yeung

Best known as the buff shouty guy who faced off against Van Damme in Blood Sport, Yeung was 65 this month, making him the perfect age to appear in a modern-day action film. He's still acting, if you count 2007 as 'still' and one film in the last 15 years as 'acting'. One thing American action movies always need is a shifty looking Asian guy for the audience to hiss at; we're not sure what he looks like now, but we fear he may have gone all Mr Miyagi on us.
Brigitte Nielsen

Because she'll literally do anything.
Wings Hauser

It's entirely possible we're living among a generation who have no idea who Wings Hauser even is. Quite simply, he's an action legend but one who always existed underneath the surface, like some sort of insanely-muscled mole person. Hauser, who recently starred in French killer tyre curio Rubber, also boasts the best list of character names ever: not even Jean-Claude Van Damme played a guy called Van Vandameer.
Jackie Chan

You want a major West-East crossover? I see your Jet Li and raise you Jackie Chan, Hong Kong's winner of the Most Injured Man contest for 40 years straight. Hiring him would stop him from making embarrassing family comedies and bringing shame on his nation. For added chuckles, have him kick the head off Chris Tucker for the briefest of Rush Hour reunions, bringing this crucial project one step closer to reality.
Michael Jai White

A credible suggestion? DEAL WITH IT. Michael Jai White has basically spent the last decade and change being a badass and getting zero credit for it - famed career leg-upper Quentin Tarantino even cut him out of Kill Bill. Last year's Black Dynamite proved he's well aware of the absurdity of his genre and an appearance in The Dark Knight (the recipient of The Joker's magic trick) showed that at least someone influential knows who he is.
Al Leong

Also known as 'the Fu Manchu moustache dude from Die Hard'. If you need a reason other than that one, you're banned from this website FOREVER.
Cynthia Rothrock

Last seen on a cop show on Channel Five at 3am circa 1996. We presume he's still there.
Burmese General

Bringing back the villain from Rambo in 2008, Burmese General, would be a casting masterstroke. He was easily the most diabolical of all of Sylvester Stallone's screen foes (sorry, Nigel Hawthorne), so evil he used to bum his POWs just because he could, even though he was totally straight and actually you watching him bum them makes you the gay one, so there.
There you have it: ten cast members that would make Expendables 2 better times the power of infinity. I look forward to next week's story announcing the casting of Steven Seagal and Michael Cera.

More:  The Expendables 2  Sylvester Stallone  Chuck Norris  John Travolta
Follow us on Twitter @The_Shiznit for more fun features, film reviews and occasional commentary on what the best type of crisps are.
We are using Patreon to cover our hosting fees. So please consider chucking a few digital pennies our way by clicking on this link. Thanks!