I saw Wonder Woman about two weeks ago. Then I wrote some stuff about it that I couldn't coalesce into a coherent review. Then I got into that Netflix show about the dead nun. Then I went on holiday. And now, I give that incoherent gibberish to you, dear reader.


Why don't more superheroes have their own signature instrument? When I think of Wonder Woman, I think of that electric cello riff and it makes me want to smash the nearest patriarchy. Whenever I think of Ben Affleck's Batman, I think of a comedy tuba.

the wonder woman theme was performed on an electric cello by tina guo and if this isnt the tightest shit youve ever seen get out of my face pic.twitter.com/OQ1bLSRxSD

Gosh, there really are a lot of similarities between this and Captain America: The First Avenger. Not just the period war setting and the magic shield and the German villains experimenting with weaponry and the ragtag team of misfit commandos and the soldier named Steve who SPOILER heroically pilots an artillery plane to his death. Not just those things, but mostly those things, to be honest.

The 'room clearing' fight scene was one of the film's best but if you told me that Warner Bros took footage of Ben Affleck's 'room clearing' fight scene from Batman V Superman and just replaced the character model, like how Disney basically recycled old animation to do Robin Hood on the cheap, I'd probably believe you. There's probably a Final Cut plug-in that makes villains look more German.

The first half hour on the mystical island of Themyscira is bright and sunny and verdant and is therefore completely unlike anything else in the DC Universe and double therefore ranks as one of the series' most memorable sequences. I guess it goes without saying that Robin Wright as an Amazonian warrior queen is very much worth your sheckles.

This section of the movie also features one of the worst extras I have ever seen. She's a woman training the Amazon warriors, and I'm pretty sure she thought she was being filmed in a wide shot and without a mic on, because you can quite clearly tell her only piece of direction was 'point a lot and mumble' given that's exactly what she does, in the centre of the frame, with audible dialogue. Hewitt recalls it better than I do.

Wonder Woman is a movie that is constantly trying to suppress how inherently ridiculous it is until it all bursts in a shower of guts and turds at the film's climax. However, the first real 'reveal' of the full Wonder Woman costume on the battlefield is handled really well and you totally buy it as a hero moment. Come to think of it, I'm not sure anyone ever refers to the character as 'Wonder Woman', which helps, a lot.

There is more smiling in this DC movie than in all the other DC movies combined, and when Gal Gadot smiles it almost makes me forget about Suicide Squad.

I am still not over the male lead character in this movie being called 'Steve Trevor'. They try and push past it by having other characters refer to him as 'Steven', but then I think 'Steven Trevor' is even worse than 'Steve Trevor'. At one point in the film's final sequence, which already stretches credulity to breaking point for reasons I won't go into here, he's namechecked as 'Captain Trevor' which yanked me out the movie like a Mortal Kombat character with a throwing spear.

I know it's contractually impossible, but I like to think there's an extended universe out there where Wonder Woman's Skittish Secretary Lady and Captain America's Government Suit Man get together and fall in love.

We are expected to believe that at no point during the events of World War I did anyone keep any record of an Amazonian woman in a short skirt single-handedly taking down an entire fleet of German soldiers with a glowing lasso before jumping atop a building. I've got to say this one's on you, war biographers. You've got to think that'd make it into at least one summary of warfare. Like, even one bullet point.

"Nothing to see here, probably, I don't know I wasn't looking."


There is a great character moment for the villains, which are genuinely quite ineffective, where they toss a gas mask into a room full of choking gas victims. "But the mask doesn't work?" says Elena Anaya's evil doctor. "Yes, but they don't know that!" cackles Danny Huston's evil German. Then they go 'OMG I can't believe you just WENT there' with their body language while laughing, and it's brilliant. I want more villains who display spontaneous acts of needless assholery and fewer 'convoluted grand masterplan' guys.

The ending is so, so bad. Like, actively undoing everything that went before it bad. So bad you will it to end before it kicks its own face off. We get a surprise third act villain, which isn't much of a surprise because there's an actual tangible absence of plot when the 'proper' villain get offed, but it's handled dreadfully. The cool war movie groove you settle into gets shaken into a MILLION-DOLLAR SUPERHERO MOVIE ENDING complete with explosions, random unexplained powers, monologuing and some genuinely execrable dialogue. I'm all for rug pulls (still giddy over The Mandarin, yo) but this ladles cringe on top of cringe until you can't bear to watch it any more.

Also terrible: the scene at the movie's climax, when a bunch of German soldiers wake up after the big ridiculous action scene and rub their eyes at the new dawn, like, 'We've finally been released from the evil spell!' This is what's known as 'problematic' in internet circles. Wonder Woman is going with the official line that German officers operating under the Kaiser in the First World War were doing so because of magic. You had one job, war biographers.

Instead of casting Ewen Bremner as sharp-shooter Charlie, the filmmakers appear to have accidentally cast his Trainspotting character, Spud, who appears strung out, bug-eyed and gurning throughout. It's most distracting. 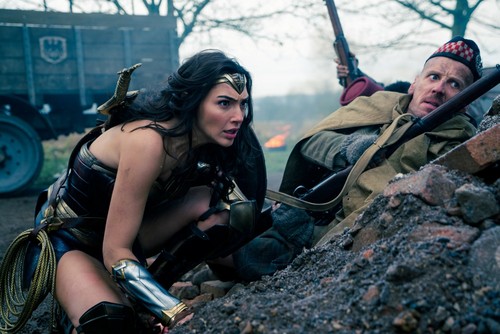 This is true of most movies, but it could have done with more lesbians.

If I had to rate the banter between soldiers in this movie on the bantometer - the official metric for ranking banter - then it would score poorly. Chris Pine and his ethnically diverse war buddies don't share much in the way of joshy war larks, nor do you get the sense that they'd be fun drinking buddies. Crucially, at no point does anyone say something along the lines of "Uh oh, this sounds like the Philadelphia job again!" which is a cornerstone of male bonding and banter in general. Why even go to war if you're not going to bant about it, lads?

A nice side effect of Patty Jenkins directing Wonder Woman is that we're not forced to view the movie, and the star, via the typical male gaze. I don't think there's a single butt shot or sideboob or gusset flash or gratuity. In fact, Chris Pine is really the one being objectified here, which is fine, obviously, because if you're offended you're ridiculous and Men's Rights is nothing. Apart from general short-skirtyness, which I guess you'd categorise under 'empowerment' (I bet no one tells Aquaman how to dress in the workplace), there is only one flash of flesh, when Gal Gadot stands towering above Pine, wearing only a fur coat and showing a bit of thigh. It's sexy as hell. I have no idea what Gal Gadot's tits look like and I couldn't be happier.

More:  Wonder Woman  Patty Jenkins  Gal Gadot  DC  Chris Pine  Robin Wright
Follow us on Twitter @The_Shiznit for more fun features, film reviews and occasional commentary on what the best type of crisps are.
We are using Patreon to cover our hosting fees. So please consider chucking a few digital pennies our way by clicking on this link. Thanks!