18 questions I still have about Kingsman: The Golden Circle

It's been two weeks since I saw Kingsman: The Golden Circle, the movie motion picture event of September, and barely a day goes by that I don't think about it. It's a movie that really makes you question everything you know. Questions like 'Who is actually enjoying this?' and 'How do you turn something as joyous as a foul-mouthed Elton John cameo into a depressing chore?' Join me as I ask more spoiler-filled questions of Kingsman: The Golden Circle and wait fruitlessly for it to answer me.


Given all of Kingsman's cutting edge technology, did the organisation have to risk Eggsy drowning so he could needlessly accompany his taxi back to its underwater garage in the Serpentine and not, say, develop a self-driving car? The kind which technically already exists in our non-ridiculous universe?

Did anyone let out anything approaching a laugh when it was revealed that Eggsy was being fed political trivia by a third party via his hi-tech spectacles? Has anyone laughed at this gag since its inception about 50 years ago? Will any of us laugh ever again?

Is this the easiest paycheque Michael Gambon has ever earned?

Why would Poppy, an American drug dealer obsessed with all things Americana, try to kill off the Kingsman before executing her nefarious plan, but not bother to take out the Statesmen - the American equivalent of the Kingsmen? 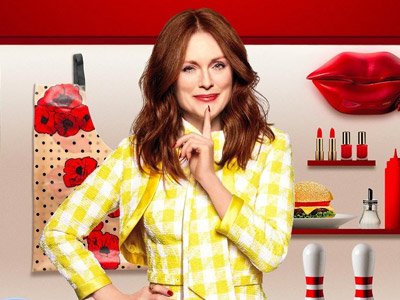 It's almost like all the characters are fucking stupid.

If the Statesman nanobot 'alpha gel' thingy can rebuild the brain, why can't it also rebuild an eye?

Why does Matthew Vaughn take every available opportunity to linger on the numerous bottles of whisky in the movie? Is it something to do with the very same Matthew Vaughn who has been caught shamelessly flogging his own single malt to anyone who'll listen?

What did Poppy's henchmen think they would achieve by slowly advancing towards Mark Strong's Merlin, who was rooted to the spot in an area they knew to be riddled with landmines? 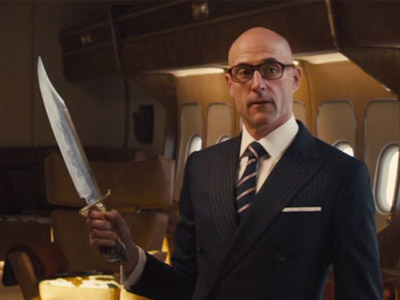 The very weapon Mark Strong uses to do absolutely nothing with.


How come characters address the fact that both Eggsy and Harry are now codenamed 'Galahad' but the movie never actually resolves that point? And when Champagne offers the pair the recently vacated codename 'Whiskey', how would that work exactly?

If Matthew Vaughn directed an action scene and didn't set it to a popular pop song, would the scene even exist at all?

Can we report this movie to trading standards for advertising Channing Tatum as a major character despite the fact he's literally put on ice for about 80% of the movie?

Is it really cost efficient or wise to have a tattoo parlour manned by a robot? Does every Matthew Vaughn movie have to feature Claudia Schiffer now?

Isn't in normally a thing in action movies that when characters cause a mountain avalanche, you actually get to see the consequences of that avalanche and the characters don't just sort of wander off, completely un-arsed? 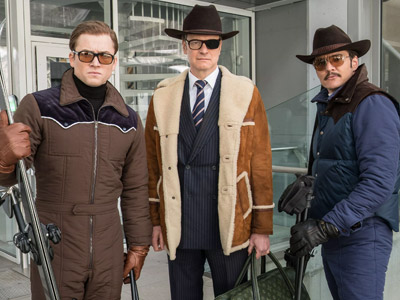 First day on set of The Young John Motson Chronicles.


How come no cameras or satellites could see inside the open top stadium prison masquerading as a government relief centre, thereby instantly revealing the incredibly obvious and transparent plan to lock up afflicted citizens in cages like battery hens?

What was Agent Whiskey's end game, exactly? Because his wife was killed by a drug dealer - a death one has to assume is not exactly considered rare in America - he had to kill the Kingsman agents because he wanted everyone who had taken drugs IN THE WORLD to die? Would that really have made him feel better?

Whose idea was it to cast the amazingly fit and athletic Halle Berry as a tech expert who audibly complains she is desperate for field work, then not actually give her any actual field work in the movie as a payoff? Was it an idiot?

Who has a more robust understanding of American politics: Matthew Vaughn or a smug, poncho-wearing sixth-former who just skim-read Chomsky?


Am I so out of touch? No, it's the Kingsman who are wrong.