You've already seen the new photograph of Spider-Man - correction: The Amazing Spider-Man - but did you realise it gives away 5 clues about the movie? Not really, but at least we didn't draw a big cartoon dick on it like we were going to. 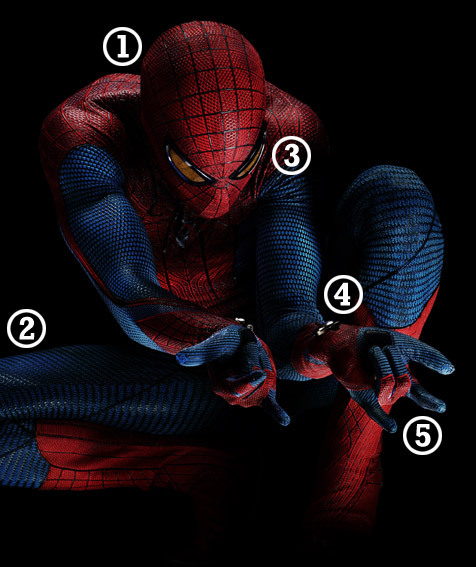 You'll notice that Spidey's right knee is not pictured: why is this? Rumours suggest it's because Marc Webb is planning big things for the new Spider-Man's right knee, including a robo-knee (as seen in fan-favourite Ultimate Spider-Man Issue #370) or possibly a cameo for Stan Lee, playing a character called Stan Knee.

This photo confirms that the new Spider-Man mask definitely has two eye-holes. Leaked designs suggested that the mask would be featureless and instead, the eye-holes would be on the suit's crotch, but they were written off as unused concepts. Director Marc Webb hinted in interviews that the new mask might have one big triangular eye-hole on the back, but clearly he's reverted to the original design to appease the fans.

As fans have no doubt already noticed, Spider-Man has mechanised web-shooters on his wrists. Judging from the design, we can see they were based on issue #228 of The Amazing Spider-Man, in which Peter Parker is bitten on the wrists by a radioactive web-shooting machine.

The context of this photograph isn't clear, but judging by Spider-Man's hand gestures, it's safe to assume he's at a Nickelback concert.

More:  The Amazing Spider-Man  Spider-Man  Andrew Garfield
Follow us on Twitter @The_Shiznit for more fun features, film reviews and occasional commentary on what the best type of crisps are.
We are using Patreon to cover our hosting fees. So please consider chucking a few digital pennies our way by clicking on this link. Thanks!