5 things we learned from the new Fast Five poster

If you've seen all of the previous Fast and Furious movies like we have (twice), you probably think you know all there is to know about the series. Well, come on it and prepare to be blown away by what the new poster tells us about the latest instalment. 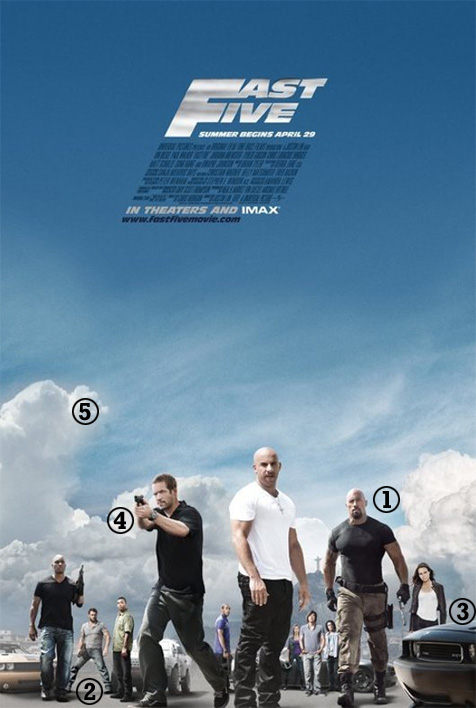 Dwayne THE ROCK Johnson has a beard. It is rumoured that prior to growing it Paul Walker kept tweaking his nipples, mistaking him for Vin Diesel. Vin Diesel likes his nipples tweaked. It's how he gets into character.

Check out this dude's stance. He clearly has a FURIOUS infection spreading in his pants. A subplot to the movie sees him driving FAST to the chemist to get some cream to put on it.

There are CARS. These will be driven frequently, and at HIGH SPEEDS. While the cars are stationary in the poster, due to the wonder of modern motion picture technology they will be seen in motion in this movie.

There are GUNS. Given Chekov's principles of drama, "One must not put a loaded rifle on the stage if no one is thinking of firing it", and the fact there are three guns visible here we can assume each of the three will be FIRED and SHIT will BLOW THE FUCK UP.

This looks like cloud, but it's not. It's SMOKE. A lot of smoke. Smoke from all of the BURNING RUBBER and BLOWING SHIT UP.

More:  Fast Five  Vin Diesel  Paul Walker  The Rock  Blowing Shit Up
Follow us on Twitter @The_Shiznit for more fun features, film reviews and occasional commentary on what the best type of crisps are.
We are using Patreon to cover our hosting fees. So please consider chucking a few digital pennies our way by clicking on this link. Thanks!