To prepare for the Star Trek Into Darkness trailer beaming down later on this week, we've been treated to a brand new teaser poster, which hints at dark days ahead for our beloved London. Click through for more observations than you can shake a Captain's log at (there are five). 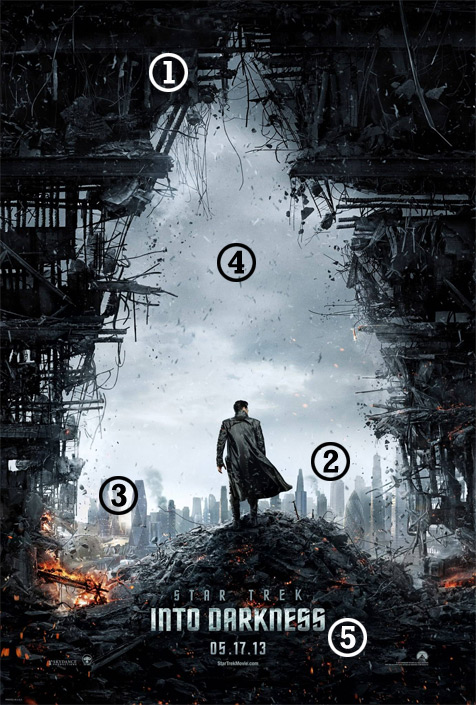 The outline of the Starfleet insignia is unmistakable, but what could have caused an imprint this large? Our guess is a surly giant robot Starfleet cop, who hands in his giant Starfleet badge by throwing it through a wall after his partner is killed one day from retirement.

Future London! With our fair capital seemingly confirmed as a destination for the crew of the Enterprise, the obligatory 'Kirk & Spock on the tube' scene set to a song by The Beatles is all but guaranteed.

You can't barely make it out, but there's a cloaked Klingon Bird of Prey hovering above the London Eye.
Honest.
Spock is in it.

Notice something missing? In an attempt to distance himself from the whole lens flare thing, J.J. Abrams opted for the London setting as it was the only city that would guarantee zero sunlight for large parts of the year. Also they were filming World War Z in Glasgow.

The "Into Darkness" part of the title came from a word association game, where cast and crew members were asked to complete the sentence "I would like to trek into _____". Other answers were: "Madness", "Infinity", "Christmas" and "Woolworths".

More:  Star Trek Into Darkness  Star Trek
Follow us on Twitter @The_Shiznit for more fun features, film reviews and occasional commentary on what the best type of crisps are.
We are using Patreon to cover our hosting fees. So please consider chucking a few digital pennies our way by clicking on this link. Thanks!