Whether you want it or not, Untitled Terminator Reboot is on the way. Arnie is back! Because lol. More importantly, James Cameron is back too! Now we just have to wait and see if his producer credit amounts to any more input than that time he tried to convince us all that Terminator: Genisys was a “Renaissance”. His actual word.


Paramount has just shared the first photo from Terminator 6, and while we don’t see Arnie, or Gabriel Luna’s new Terminator, or James Cameron making origami Na’vi out of crisp $100 bills, we do get our first view of the trio of fighting females in the film. Check out Sarah Connor now - this OAP is ready to fuck your robots up, Skynet. 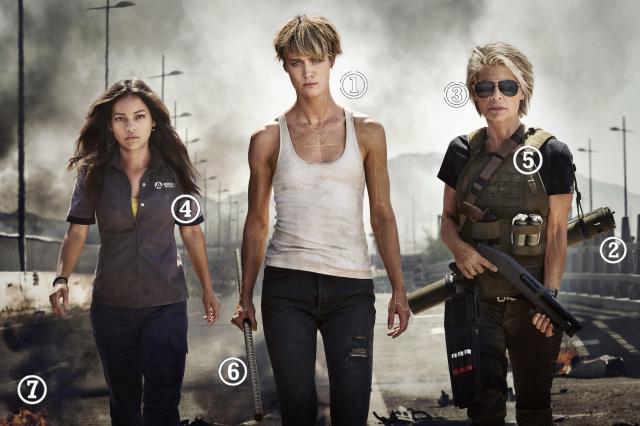 As you may have guessed though, this photo didn’t come with numbers all over it. Oh no. I’ve got COMMENTS, y’all.

Mackenzie Davis takes central place in the line-up here, and is most likely playing a Terminator. She’s also probably fighting for the good guys considering that she’s not seen in this picture using her mimetic polyalloy to stab her two companions through the brain with a long, pointy spike-finger. More intriguing though, are the scars across her body. Is this a sign that she has had a chrome exo-skeleton grafted onto her human bones? Or is she a Transformer capable of turning into a Vespa or something? Or do the scars form a pattern that acts as some kind of Skynet-destroying computer virus? Like a Konami code for Cyberdyne? My money is on none of these.

Judging from the storage tube strapped to Linda Hamilton’s back, we can conclude that, since the events of T2, Sarah Connor has gained employment as an architect. She was probably on her way to the most important pitch meeting of her career to present some blueprints she had stayed up all night working on, until some damn Terminators turned up to ruin her day, like they do. Damn Terminators.

Zoom in really tight on Sarah Connor’s Aviators and you can just make out the villain they’re facing down in this scene. 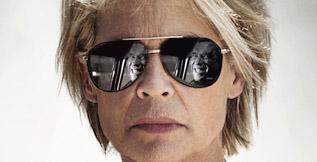 Natalia Reyes stars as Dani Ramos, a young Mexican woman being hunted by Gabriel Luna's Terminator, but here she is seen wearing a uniform for 'Arius Motors'. We know that, from Terminator canon, Skynet evolved from a faulty carburettor, so could Dani Ramos be the one who discovers it? Also, having a young Mexican as the film's lead immediately means that the film can reference Trump and his wall throughout the film, so be prepared for a politically charged movie, and one that reveals that Russian tampering was really behind the development of evil cyborg technology all along. Obviously, it's no coincidence that 'Arius Motors' is an anagram of 'AI ROM to USSR'.

Forgetting the blueprint case for a minute, how packed out is Linda Hamilton here? She has a gun, a couple of grenades and handy carry case swinging down by her hips, which I can only imagine hold those sweeper devices that airport security use. I guess there's no better way of determining if someone is a Terminator? Huh.

Of course, all that equipment isn't a match for a Terminator's most fatal weakness: a big stick. Being a cyborg herself, Mackenzie Davis knows that big sticks can be the undoing of any T-1000 if used in the right way. So pity the guys in the bar that always just smashed a pool cue round Arnie's head. That's not how you're supposed to use it. It needs to be inserted somewhere so that the battery pops out, like with an iPhone.

The fact that the background is a recognisable highway, albeit in complete disarray, gives us our biggest clue about where this film sits in the franchise's timeline. With Judgement Day still postponed, this film must occur before John Connor travels back in time in Terminator: Genisys, but after Kyle Reese resets the time to allow young John Connor the chance to delay the Terminator uprising, which still goes ahead because they still keep sending robots back to the same time and
Still, Deadpool director Tim Miller is in charge behind the cameras on this film, so it might be good? Who can literally even tell just from a photograph?

More:  Terminator  Arnold Schwarzenegger  James Cameron  Tim Miller  Linda Hamiton
Follow us on Twitter @The_Shiznit for more fun features, film reviews and occasional commentary on what the best type of crisps are.
We are using Patreon to cover our hosting fees. So please consider chucking a few digital pennies our way by clicking on this link. Thanks!