A few words on the Blu-ray release of Gravity

Gravity may not have won many of the flashier, showier Oscar categories at this year's Academy Awards, but it still picked up the most trophies on the night. So what better reason - aside from the fact that I got sent a free copy in the post and feel obliged to do so - to talk about the film's DVD and Blu-ray release today?


It will forever be a taint on our otherwise uh… spotless record that we never actually got round to reviewing Gravity properly. Sure, Ali gave good write-up when we announced it as our film of the year. And we all had an appreciative chuckle when our trademark irreverent humour tried to paper over the cracks with a 'five celebrities review Gravity' joke. Ah, the ol' 'irreverence' trick - works every time.

But take a look at our Reviews Index and you won't see Gravity listed. Why? Too busy, couldn't find the words, couldn't be arsed, outside living life to the max - pick one. I don't see your blog covering all the film releases. No, your Letterboxd doesn't count.

But here we have an opportunity to make amends. Gravity is the most stunning, visually spectacular film to be released in ever. It's cinematic scope is incredible, providing a more fully immersive big screen experience than any other film has ever managed to achieve. And now, as of today, you can own it to watch on your 32" TV at home. Or download a version to watch on your phone on the way to work. It's what Alfonso Cuarón always wanted. 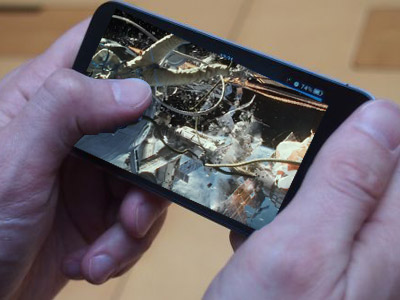 
Frankly there just aren't enough superlatives in the galaxy for Gravity, and certainly none that haven't already been used tenfold for the film's theatrical release. So the only way to do the Blu-ray justice is to invent new ones:

The special effects are the incredlingest ever seen, marking the biggest technazzling leap in years. Sandra Bullock gives the most credfeltasticable performance of her career and the film's scale in terms of hitherto-unseen groundbreakazing territory is simply the epicfullest. Also, space is awesome.

Sadly, without a means to watch the 3D version of the film at home, I am unable to comment on the three-dimensional playback of the movie. However, given the lenticular packaging, I AM in a position to discuss the Blu-ray's 3D cover. It really is an astonishing feat - not so much eye-popping in an outwards sense, but more like a window giving the illusion of hidden depth inside. Plus, it feels all ridged and scratchy, which is always fun. 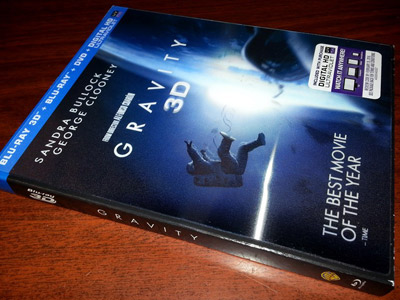 You don't even know how amazing this is because your stupid computer screen is only 2D.


So there we have it. The overall victor of the 2014 Academy Awards and a film that looks so good on the screen and on the cover that I have had to make up words in order to fully describe it.

And if you need any other testament as to how heartily I recommend owning this film, know that I've been really busy recently and didn't have time to review DVDs and Blu-rays, but I made an exception in this case just so that I could be sent a free copy. I wanted it THAT badly.

More:  Gravity  Alfonso Cuarn  Sandra Bullock  Blu-ray  Selling Out
Follow us on Twitter @The_Shiznit for more fun features, film reviews and occasional commentary on what the best type of crisps are.
We are using Patreon to cover our hosting fees. So please consider chucking a few digital pennies our way by clicking on this link. Thanks!