A guide to Boardwalk Empire's various synonyms for 'vagina'

Because in the twenties they knew how to swear. The bunch of cunnies.


You might not be surprised to learn that much of this isn't all that SFW.
Cooze

The word 'cooze' is still in use today in Italian-American slang (or at least they used it on The Sopranos, where Tony made much comic mileage out of calling his neighbour Bruce Cusamano 'Cooze' to his face, so it must be).

Used to refer not only to the female reproductive parts, but more broadly to a lady herself if she is deemed of dubious moral standing. Can be used collectively to refer to a group of prostitutes, as in, upon greeting the proprietor of a 'cathouse': "Hey, how's the cooze tonight?" 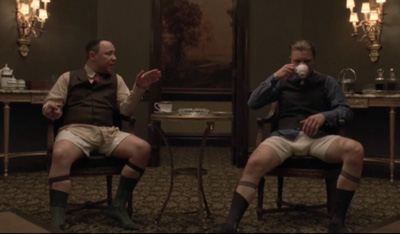 Again, this can be used as a derogatory term for a lady of whose good character one is unconvinced.

Below we can see a demonstration of how, especially if one has just been having extra-marital relations with the lady concerned, using the term in front of her son simply isn't cricket, and is likely to provoke an aggressive response, particularly if you have also been conspiring to murder him.


A situation we've all been in at one time or another, and thus a valuable lesson in etiquette.
Cunny

Also in evidence (films constitute evidence) around 60 years earlier in Gangs of New York, in which Bill the Butcher enquires not unreasonably of Amsterdam Vallon: "What's the matter, is your mouth all glued up with cunny juice? I asked you a question."

Here we can see a typical example of the word's usage in the 1920s, when it was considered quite acceptable for two ladies to discuss the respective merits of their cunnies in public.

Paz de la Huerta was persuaded to actually wear clothes in this scene by director Tim Van Patten, who assured her that it would be shot tastefully and not exploitative.

This is a crappy shot of someone's TV they've filmed on their phone, so the volume's pretty low and you must turn it up very loud. ESPECIALLY if you're at work.
Bonus, entirely gratuitous, swearing: 'motherfucker'

We beg your indulgence to veer away from the discussion of gynaecological terminology for this last section, to highlight another interesting linguistic trope.

At the time the word 'motherfucker' was in use only in African-American communities, and even among the most foul-mouthed white people had not slipped into general parlance, as evidenced by Nucky Thompson's confusion here. Now, of course, it is quite common for a person of any ethnic background to enquire of, say, a shopkeeper: "Pardon me, motherfucker, but would you kindly direct me to where you keep the motherfucking sun-dried tomatoes?"


This is genuinely quite interesting and thus justifies this entire feature as serious historic etymological discussion. In light of this, why not show it to the kids?

More:  Boardwalk Empire  HBO  Sky Atlantic  Stephen Graham  Michael Pitt  Gretchen Mol  Steve Buscemi  Michael Kenneth Williams
Follow us on Twitter @The_Shiznit for more fun features, film reviews and occasional commentary on what the best type of crisps are.
We are using Patreon to cover our hosting fees. So please consider chucking a few digital pennies our way by clicking on this link. Thanks!