It has been approximately one week since the Disney/Lucasfilm merger, and the announcement of Star Wars: Episode VII for release in 2015. Seven days. In this time, the rumour mill has already kicked into overdrive. Film bloggers, writers, editors, hear me: I'm making a polite request. Stop it. Just stop it. Right now.


It was one of the most bizarre feelings I've ever experienced; emerging from a cocktail bar last Tuesday evening to discover that the world had changed forever – new Star Wars movies were on the way. I suffered the most frustrating journey home imaginable, clinging to the faintest signals of WiFi on the tube, attempting to piece together the story via a multitude of sarcastic tweets and gobsmacked reactions. Disney? Wuh? Episode VII? This is a joke, surely? It soon became clear: our generation was not done with Star Wars. Not by a long shot.

The initial feeling was one of excitement – albeit tempered with caution, for obvious, Gungan-shaped reasons. But with George Lucas shunted out of the picture on a big fat golden canoe, clearly Episode VII would be a fresh start for Star Wars. A new hope, if you will. (*impossibly smug face*)

Seven days later, I am already sick to the back teeth of fucking Star Wars. Because although I remain enthusiastic about a new Star Wars movie – particularly one I can take my kid to in just a few short years – in all the excitement I forgot one crucial thing: quite how long I'd have to suffer the insufferably fevered Star Wars coverage online. 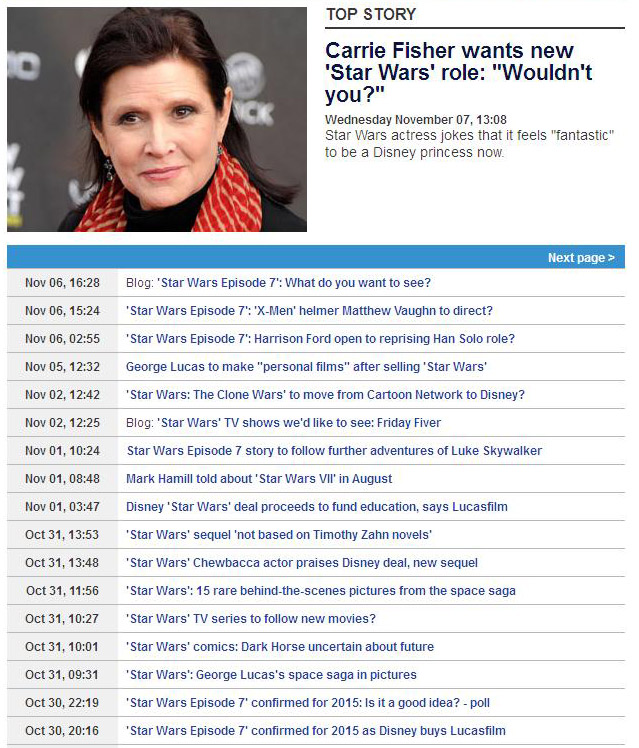 It's only been a week, Digital Spy...


Let's break it down. The deal between Disney and LucasFilm was signed on the 30th October. Though I'm sure there were talks stretching back months prior to the handshake between Disney CEO Bob Iger and George Lucas, Star Wars: Episode VII technically didn't even exist until last Tuesday. Yet to read the coverage online in the past seven days, you'd think the movie was due for release imminently.

The initial response was understandable: the Episode VII announcement was one of those defining 'HOLY SHIT!' moments you can't quite get your head around. Of course movie websites like SlashFilm.com and Collider.com and the like are going to report on this news. It's HUGE.

However, as inevitable as an opening crawl, the slow creep began. Just reporting the news wasn't enough: websites needed to be saying something else about Star Wars; ANYTHING else. Even within the first 24 hours, some sites were reporting stories from 'sources' about what Episode VII would consist of; discussing in broad terms 'What this will mean' for film fans and drafting up lists of directors who should – and shouldn't – direct it. My favourite story of this ilk was a SlashFilm 'Your Questions Answered' article, which answered the question 'Who could direct it?' with 'Potentially anybody'. At this early stage, these were basically just meaningless words on a page to fill some space; they're barely even in a row.

Again, this heightened coverage was anticipated. But it hasn't slowed since. Over the last week, we've seen rumours regarding almost every aspect of Star Wars: Episode VII reported as if they were fact, when in actuality, they're not even worthy of your bandwidth.

AS YOU WERE, EVERYONE


So far, we've learned that Brad Bird and Damon Lindelof definitely aren't already working on Episode VII under a shroud of secrecy (that narrows the field by two, at least); Mark Hamill and Carrie Fisher "knew" about Episode VII as early as last year (for whatever that's worth); Harrison Ford "may be open" to returning as Han Solo (says a bullshit source); and Matthew Vaughn is "in talks" to direct (despite the fact the film has no script, no outline and didn't even exist this time eight days ago). The coverage is already as ruthless and relentless as the Empire, and there are potentially THREE MORE YEARS of it to suffer.

It's not just film blogs and movie websites that are chipping in, either: everyone has an opinion. Here's popular celebrity arse rag OK Magazine chiming in with their incredible scoop:

"
"
"Zac Efron is the bookies' favourite to play Luke Skywalker in the new Star Wars films… But he won't be alone in the battle, with Jamie Bell, Shia Leboeuf [sic] and Ryan Reynolds all in line. Meanwhile, Ryan is also the favourite to play Han Solo while Emma Stone is top choice for Princess Leia."
That shows a most impressive misunderstanding of both Star Wars lore and spelling. Oh, and Photoshop. This is the actual picture used on the article. 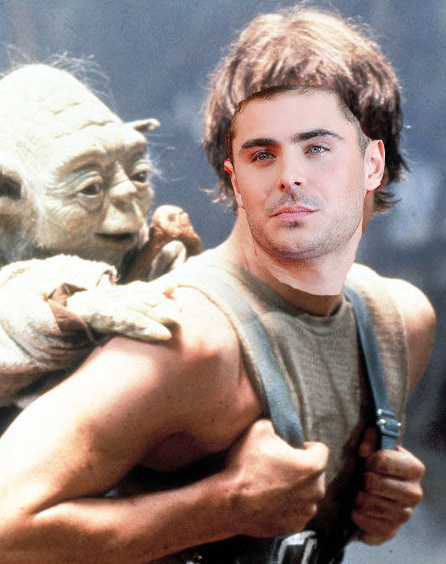 Bonus points missed for not shopping Vanessa Hudgens on his back.


As you can see, everyone and their work experience chimp has an opinion on Star Wars and Episode VII, and no one is willing to keep it to themselves. Movie websites must cover stories that they think readers want to read, but we've already reached a point – I repeat for emphasis: only seven days later – where rumour is considered fair game and hearsay is still worth clicking to after the jump. Surely no one enjoys reading this stuff? I learned a long time ago, if a movie news headline has a question mark at the end of it, the answer is: no, probably not.

Here's my suggestion, movie bloggers. Take a step back. Breathe. Assess the situation as it stands. At present, Star Wars: Episode VII probably only exists on a crinkly old notepad full of George Lucas' notes and thinly-sketched racial caricatures. There will be Star Wars news in time, probably sooner rather than later – Disney turning around a huge franchise film like this in three years means you won't be sitting on your hands for long.

Guys. Don't report on every rumour you read or hear. Don't sweat the little stuff. Savour the sweet anticipation while it lasts, before it's inevitably soured. A screenwriter will be appointed, a director will be chosen, the cast will soon follow. That's the stuff you want to get excited about: actual, quantifiable facts. For now, please do all of us a favour and resist the rumour-mongering and click-whoring, for all of our sanity. That sound of a thousand voices crying out in terror? That's us, reading another story about how Mark Hamill "might potentially be open to the possibility of reading a script if it exists."

More:  Star Wars  George Lucas  Star Wars Episode VII  Disney  Serious Corner
Follow us on Twitter @The_Shiznit for more fun features, film reviews and occasional commentary on what the best type of crisps are.
We are using Patreon to cover our hosting fees. So please consider chucking a few digital pennies our way by clicking on this link. Thanks!