A possible creative direction for the Hulk TV show

Hulk: I love that little guy, now he's avenging all over the place and everyone wants to hug him all of a sudden. Let's build a TV show around that very premise.


Last summer ABC announced they were developing a Hulk TV show and everyone was like, "Pssshh! That big green dickhead sucks balls! I could take him, easy. One decent shot to the chin when he's distracted looking at the pool table and he'll go down like a sack of spuds. Pah! Hulk! Twat, more like!" (I'm paraphrasing.)

But now he's back, played by Mark the Gruffalo in Avengers Assemble to widespread acclaim and suddenly everyone wants to buy his action figure and take him home to meet their mum. Unsurprisingly, ABC president Paul Lee has reminded us:

"
"
Hulk is in development. It wasn't going to be ready this season, but we hope it's going to be ready for next season.
You can't just sling him on the TV to smash stuff up every week and call that a show, though: you need an angle. So I say trade on his new-found popularity with a straight-up family sitcom. 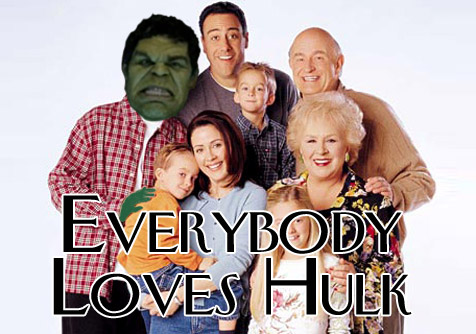 Get him through the pilot without breaking anyone's spine and I'm thinking six seasons and a movie.

More:  Hulk  The Incredible Hulk  Guillermo Del Toro  Everybody Loves Raymond  ABC
Follow us on Twitter @The_Shiznit for more fun features, film reviews and occasional commentary on what the best type of crisps are.
We are using Patreon to cover our hosting fees. So please consider chucking a few digital pennies our way by clicking on this link. Thanks!