Jealous, girls? I got to speak to Bradley Cooper about The A-Team, and I'm pretty sure he was only wearing a towel when he picked up the phone.

So after the nightmare that was the Rampage interview, I only had 10 short minutes with Bradley, and really only needed a few choice quotes, which I got. He was way more relaxed than most (hence my towel approximation) and very charming. Plus he has a super-cool pseudonym he uses when checking into hotels, which I know and you don't. Ha. 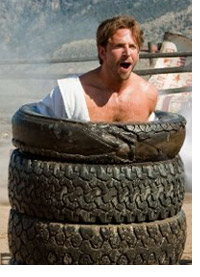 : Hey Bradley, how is it in New York this morning?

Bradley Cooper: It's grey and misty, but kind of beautiful.

: Cool. Because it sucks here in London, like it always does. Anyway, on to business...

BC: Oh, you don't want to talk about the weather? [laughs]

: I don't think my editor would appreciate it. So how did you get involved with the A-Team?

I heard that Joe Carnahan was gonna do it, it had been around for a while, the script and the idea. At some point JC got involved and I thought, 'Oh God, can I at least sit down and meet with this guy?' because I always really liked Smokin' Aces and I also liked Narc. So I sat down and talked to him and we really hit it off, we talked for like two hours in his office.

He was like, let me give you the script. So I read it that night and I texted him the next morning and said, 'I gotta play Face, I love the character' and he said okay. The Hangover hadn't even come out yet, so he really fought for me to get it and Jules Daly, the producer also did, and Alex Young who was there at Fox, they all sort of said okay, we want you to do it.

Oh and Liam Neeson was already attached too, and you sort of realise the pedigree of the movie and the direction Joe and Fox were gonna go with this. It was a no-brainer for me.

BC: Oh yeah. It indicated what kind of tone it was gonna have.

: How would you describe your take on Face?

BC: I play the character that Joe wrote in the script, you know? Hopefully you'll feel elements of Face from the TV show in that he's a bit of a charlatan... not a charlatan, he's a charmer, he definitely gets in trouble sometimes with the women. That can be his Achilles heel, according to Hannibal.

The difference is, Dirk Benedict's Face never wanted to get his hands dirty. With this Face, we definitely took seriously the fact that we were an A-Team unit so we trained really hard with an M4 machine gun. This Face definitely has no problem getting dirty and actually likes it a bit.

: Did Dirk give you any pointers when he popped in on set?

BC: We couldn't stop talking to each other, he was just a well of information. Not really even what he did as Face, but just his whole life. What an interesting guy. Very humble.

BC: It was a lot of fun. He's really not scared of dying, this guy Face, and that lends itself to a lot of freedom to do whatever he wants to do.

: I spoke to Joe, he spoke very highly of you. I think you have a bromance thing going on. He called it "a gay idolatory thing".

BC: It was disgusting. Probably. That's accurate. 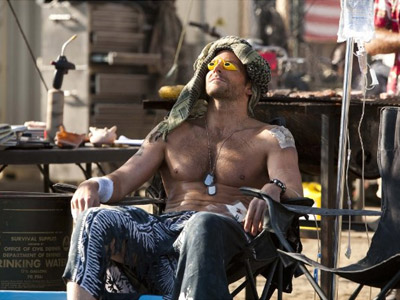 BC: First of all, when I was a kid, all I pretended to do was play with guns, assault teams and stuff. So imagine you're on a huge container 30ft up in the air with a wind machine and Liam Neeson is 10 feet from you and you both have M4 machine guns strapped to you, and you're being brought down to the desert, which would be Baghdad.

It was like a kid's dream doing a movie like this with him. He comes at it with the same energy and excitement that I would come at it with, even if we were 10 years old.

: Were there any crazy moments during shooting where you just thought, 'What the hell am I doing?'

BC: Every day. It was a brutal shoot.

BC: It was a lot of fun, but it was very hard work, it was difficult. It was demanding. I had never done such a physically demanding role and that took its toll. I was eating a certain amount of calories a day so I think my brain wasn't even functioning on the same level.
More:  The A-Team  Bradley Cooper  Interview
Follow us on Twitter @The_Shiznit for more fun features, film reviews and occasional commentary on what the best type of crisps are.
We are using Patreon to cover our hosting fees. So please consider chucking a few digital pennies our way by clicking on this link. Thanks!
Next Page »