: Joe said you were completely unaware of how big a star of you were... Surely that's got to kick in some time?

BC: Absolutely not. I don't think there's anything to be aware of. Maybe I'm wrong, I mean, I was a part of a big hit movie which I was very lucky to be a part of and it's given me opportunities, but outside of that, I don't see anything else really. If I can continue to work and be in great movies, that would be fantastic. 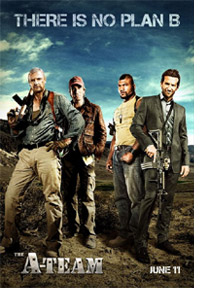 : This is your first time making an action movie. Is it fair to say it was a trial by fire?

BC: I really took to it like a duck to water. Is that a saying? I can't remember. It was effortless, honestly. I've logged so many hours in preparation for this movie pretending and doing fake fighting, but this is pretty easy to do in terms of that world of action. I've always had a dream of being able to do stuff like that. It wasn't actually that difficult.

: Any practical jokes on set? Rampage couldn't remember any...

BC: They were doing three units at once, and you'd hop over to second unit... it really was demanding for everybody. But Rampage, the poor guy, would be in the make-up trailer four hours before everyone else because they had to redo his tattoos and that just takes forever. By the time he got to set, he was always so punch-drunk with being in that trailer for four hours. I remember there was a lot of laughter, he was a very lively guy in the trailer.

: Is The A-Team the manliest movie ever made?

BC: It definitely was dude-heavy, that's for sure. It definitely felt like the first movie where I actually was working with a bunch of guys that I forgot... are they all actors? It felt like no other working experience I ever had, it was fantastic. If you had just walked by the set... we all could have been anybody and not actors, you know what I mean? It could have been like an oil refinery or something.

: Presumably Jessica Biel brought something different to the set?

BC: Thank god she did, that was always nice. She has a great role in the movie actually and plays a very important role, and also one where she's on the same level as everybody else, if not higher. She was fantastic, it was perfect casting.

: What's your fondest memory of the shoot?

BC: Right off the top of my head, I'd probably have to say it was working with Liam. That was pretty special.

: Are you a fan of big summer blockbusters?

BC: I love movies, I'm the first one out the door to a lot of summer blockbusters, I love the escape of it. The fantasy.

: Any favourites? What would you compare The A-Team to?

BC: At its best, this movie would be like a Lethal Weapon in some ways, with the humour of the tone. I was out opening day of Clash Of The Titans, the opening day of Avatar, I go and see all of 'em... 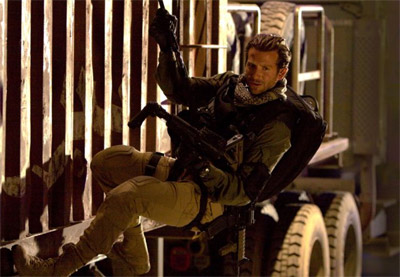 : Are you looking forward to getting your own action figure?

BC: Yeah, I didn't even know that. I guess they would, huh?

: You wouldn't be the first actor to play with himself.

: What news of an A-Team sequel?

BC: Yeah if it does well, we would do one. Absolutely. Let's see if people like the first one.

: Have you spoken to Todd Phillips about the Hangover sequel?

BC: We talk about it all the time.

: So what can we expect?

BC: That we're gonna do it.

BC: I don't know, but I think there's a formula to the way the first one worked and I like the idea of that.

: Would you be up for more action movies?

BC: Absolutely, yeah. I would love to do something like that, that would be fantastic.

: Maybe scale down the romcoms...

: Er... I guess not. Anyway, thanks for taking time out today Bradley, best of luck with the movie.

BC: Thanks, bud.
Squeee! He called me bud! Great guy, perfectly chatty and, like Joe Carnahan said, doesn't seem to be aware of the huge star he is, or is about to become. That's kind of refreshing, because in all honestly, I half-expected him to be a total butthole (that's what you get for playing lots of douchebags, I guess). Joe Carnahan tomorrow.

Excerpts of this interview were originally published in Total Film magazine
More:  The A-Team  Bradley Cooper  Interview
Follow us on Twitter @The_Shiznit for more fun features, film reviews and occasional commentary on what the best type of crisps are.
We are using Patreon to cover our hosting fees. So please consider chucking a few digital pennies our way by clicking on this link. Thanks!
« Previous Page