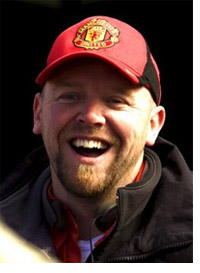 : Did you consider Bradley Cooper a risk? He's not typically an action guy...

JC: I sat down with him and you realise he's just a guy's guy, for lack of a better phrase. He's still shocked and stunned that he has achieved any fame or success at all. It's really lost on him. It's funny because I've been with people who are aware of who they are, and they tend to draw attention, and when you're with the guy who's not aware of who he is, people don't look twice. It's an interesting energy that they carry and Bradley is very much in the latter category.

He just has an ease of use and an ability to work his ass off if he doesn't understand something. He trained as hard or harder than anybody on that show, and got really good with those weapons, with the M4, the standard issue carbine for the US military. That guy was ridiculously fast with that thing.

We prop actors up with accolades - he can do this, he can do that - but when you bring all these things together, with how hard he was working and how much he was invested, you see him in this movie and you've not seen him before. This is like an action star. I can't imagine anybody else playing that role, and anybody else being that charming in it. He's great and, again, he's one of those four guys that just works so beautifully together.

: Sounds like kind of a bromance you guys have brewing.

JC: He knows. It's a borderline gay idolatory thing that we engage in. Complete bromance territory!

: Rampage and Sharlto are new to the acting game full stop...

JC: What I'm really interested in seeing is people that have a perception about who Rampage is and then seeing him in the movie... I'm telling you man, he's so fucking good in this movie, he's so touching and charming. We have a gag reel at the end [Ed's note - wasn't on the film I saw] , there's a section of it that's about 30 seconds of nothing but Rampage cracking up laughing. He's got such a great laugh and it's so infectious that we thought if we're laughing this hard at it, we should just put it at the end of the movie so everybody can get a kick out of it.

When I would sit through something like Cannonball Run, I would sit there right 'til the end when Dom DeLuise and Burt Reynolds would start cracking up. It's one of the best parts of the movie. You give people a really good time, you send them out with a smile on their face. We have stuff in there that shows how much everyone enjoyed it and how much fun we had.

Sharlto was such a gigantic... these two guys more than anyone else, I felt the biggest responsilibity to do it right. Rampage had shared with me that he had real rough times with his Dad, and he said one of his fondest memories is every week sitting down to watch The A-Team with his father. His dream as a kid was to be BA.

Sharlto showed me a picture of himself at ten years old, holding a Mr T birthday cake which I thought was very sweet, until he reminded me, think of where I am and what time this is... 1985 in South Africa and there's a black man on his birthday cake. A huge deal. Sharlto was such a huge fan and Dwight Schultz came to the set. Sharlto spent two or three days with him and he was so reverent and so respectful. Both he and Dirk, it was beautiful to get those guys' energy. We were doing this because they did it, and we couldn't have done it without them.

: Were there any moments where it dawned on you just how big this movie was going to be? It's a huge undertaking.

JC: You run into the danger of freaking yourself out in a moment where you shouldn't freak yourself out, so I always try to keep the perspective of, listen, I'm incredibly fortunate to be doing this, in the biggest way. And when I say that I mean that.

I was a shithead in high school. If you talked to one of my guidance counsellors from that time and told them that I'd be doing this, [they'd say] I'd either be in prison or living off the state, one of the two. So for me, I'm always aware of it, when you're not the smartest guy or the most talented guy in the room, you gotta bust your ass and be perceptive and be anticipatory and be all these things that give you a little bit of a leg up.

I'm always deeply, deeply humbled by this thing, honestly. I worked too many shit jobs and too much hard labour through college and the early years to be doing this. It's always about the process, I don't care if you're making something for $100,000 or $120 million, it's still filmmaking and the basic principles and components of that are the same.

I never saw 100 million dollars or 120 million dollars, nobody was ever standing in a room with all this money. It's a bit of an abstraction that I could be overwhelmed by something that was nebulous to me. I saw the stage and the sets and I knew it was expensive and I knew we had a responsbility to do something good with it, but beyond that, no. I just concentrated on making a good film.

: We've seen snippets of Tank vs Plane, but were there any action sequences considered that were too over the top?

JC: If you think that scene is over the top, wait 'til what comes right after it. It's one of the great, crazy action sequences in any movie, involving that tank. I think it's cool as hell. If you don't like it, you don't like action movies. I'd be that bold to say if you don't like that sequence, you flat out don't like movies. If you come to an A-Team movie and you don't expect to see that stuff, you're in the wrong place. We're not making King Lear. It's The A-Team. Everyone is duly warned. In Wanted, they can't really do all that. We know that. Have a good time. Or fuck off. You know? 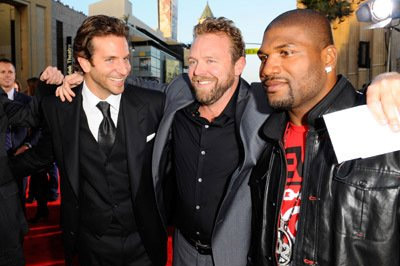 : Rampage said The A-Team might be the manliest movie ever. What do you reckon? How manly is it?

JC: [laughs] I love that. It might be. I would put it up there with the most manly of movies. You have very muscular personalities on that movie. That also implies a bunch of chauvinists and a bunch of assholes, which is not the case, it's just these are bread and butter, meat and potatoes guys. All of 'em. Even Sharlto, they have a physicality... these guys aren't 5'1. These are leading men who are actually over six foot, which is rare in Hollywood. It was a very masculine set, I'd say that.

: The whole thing sounds like hard work. How do you keep it a fun set?

JC: I try to keep things very, very light and I want people to have a lot of fun, and I think that creating that atmosphere brings the best work out of people. I don't think running around and screaming like an asshole is going to get anybody inspired or excited to work hard. I DJ when I'm on set, I play music all day. If a grip wanders up and says can you play 'Stranglehold' by Ted Nugent, I'll play it for him.

The hierarchy? I'm the director, stay away from my monitors? I just don't do that shit. It doesn't feel right, it feels rude. I always think what my mother would say to me if she saw me behave that way, it's just lame. I just don't do it, I would never be treated that way and I would never take it off anybody, I don't care who you are. If someone spoke to me that way I'm going to fucking knock you on your ass. I don't go for that stuff, I don't treat people that way.

: Tell me about some of the practical jokes you guys played on each other. I fail to believe you weren't all ripping on one another.

JC: We did one to Rampage. Sometimes I'd put an ear bud in Rampage's ear to talk him through stuff, and I'd throw him ad libs, and so in the middle of scenes, I'd deliberately try to bust him up. If I knew a scene wasn't going well, I'd start whispering stupid shit to him. There's the famous Snoop Dogg 'deez nuts' thing... He'd ask these guys 'Do you eat at Wendy's?' and then we'd say 'Yeah, Wendeez nuts are on your chin.' So juvenile and stupid, but without fail, we would fall about laughing. I would literally start whispering that shit to him in the middle of takes just to get him to lose it, and when that guy cracked up and lost it, everybody roared. If you're not laughing, there's something wrong with you.

: Finally: will we see an A-Team sequel?

JC: I wouldn't be averse to doing another one. If you asked me that based on this movie if we would make a sequel, then yeah, we would make one. What I'm hoping is that this is the movie that sneaks up on people, that they didn't think was coming. They think 'Ah, it's just an A-Team movie' then they go and they have one of the best times they're gonna have in the threatre this summer. It'd be a real shame if we couldn't, because I had a blast. That was the best time I've ever had. Having that level of chemistry, I just don't think it comes along that much.
So that's that. I've realised I haven't actually had time to write up my A-Team review, which makes all of this rather pointless. Needless to say, I liked it, and hopefully I'll get it online soon. Shame I didn't get to speak to Liam Neeson, but I had just seen Clash Of The Titans so maybe it wasn't the best timing anyway.

Excerpts of this interview were originally published in Total Film magazine
More:  The A-Team  Joe Carnahan  Interview
Follow us on Twitter @The_Shiznit for more fun features, film reviews and occasional commentary on what the best type of crisps are.
We are using Patreon to cover our hosting fees. So please consider chucking a few digital pennies our way by clicking on this link. Thanks!
« Previous Page