Yesterday, I posted my interview with Sharlto Copley for The A-Team, which is out this week. Here's my chat with Quinton 'Rampage' Jackson, who plays BA Baracus. It did not go quite as well.

I was a little nervous before interviewing Rampage Jackson, as usually actors have a 'bullshit' button they can push when asked any question and they can spew for hours - you just need to prompt them. Not Rampage. He was hard work. I'd prepared around 30 questions for him, which is more than I usually would, but he straight-up stone-walled me on almost every question. Every time he answers with more than one sentence, I pretty much had to prompt him to do so. Then, he's not an actor, so fair enough.

Also, a confession. I was recording the conversation to transcribe later on (common practice) but was using my mobile phone to do so, which emits a faint beep every 5-10 seconds. It's not ideal, but no one has ever raised a problem with it before, or even mentioned it. Not Rampage. 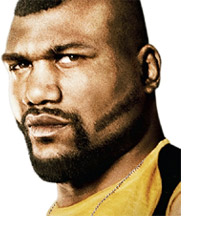 : That's just me recording the conversation. I hope that's okay.

RJ: [huge pause] How long is this interview going to be?

RJ: Man, I hear that really good. That beeping's gonna annoy me. You can't stop the beeping?

: I can't really. [panicking] I can be quick if you like. You're playing B.A. in the new version of The A-Team. Tell us a little bit about how you became involved in the film.

: What did the audition involve?

RJ: It was just a regular audition, just read the script, read the lines.

: You were one of the first actors to be cast, but how did the project change when John Singleton left?

: You've said that you saw an acting coach to prepare for the role, what kind of work did you focus on with him?

RJ: Just acting, delivering lines, regular stuff. He taught me how to basically be myself on camera.

: What was it like working with Joe Carnahan when he took over?

RJ: I re-auditioned for him. Joe's a great director, a funny guy. We got along great. He's just an artist, he's real good at what he does.

: How did you celebrate when you knew you'd got the part of BA?

RJ: I was just happy! Actually, when I got the part, I was still not able to tell anybody. I had to keep it a secret. I remember that, I couldn't tell nobody. I didn't really celebrate. I was happy, but I didn't know what I was getting myself into... [laughs]

: You have a background in UFC. Did that prepare you for a tough shoot on The A-Team?

RJ: Prepare me? No. Hell no! This shoot was something else.

: Tell us a little bit about UFC. You have a fight coming up soon, right?

: And who are you fighting?

: You're still fighting in the UFC while promoting The A-Team. What does a day's training consist of for Rampage Jackson?

RJ: It consists of a lot of work, for real.

: [pause]. Okay... How did you approach playing such an iconic role? Did you want to pay homage to Mr. T or try and bring your own thing to the table? 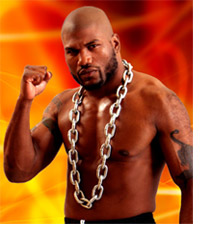 : You wear chains for your UFC bouts, but your BA doesn't wear the gold chains! Why is that?

: [mock huffing] I'm talking to him on Tuesday, maybe I will! B.A. is a tough guy, as are you, but he also has fears - he won't get on a plane. What scares Rampage Jackson?

: [exasperated] What, what are you scared of?

I'm scared of ghosts, stuff like that. Stuff I can't beat up! Ghosts. Goats. I'm scared of three-legged goats. Nah, I don't like ghosts, all that stuff.

: Do you have a favourite line of B.A.'s from the movie?

: Maybe you should start having some favourites. Just pick some, for interviews. Just so you've got something to say. [Ed's note - At this point, I covered my mouth in horror because I realised it sounded really nasty, and I hadn't meant it to. Maybe it was me subconsciously willing the interview to a premature close]

RJ: [bored] Okay.
More:  The A-Team  Rampage Jackson
Follow us on Twitter @The_Shiznit for more fun features, film reviews and occasional commentary on what the best type of crisps are.
We are using Patreon to cover our hosting fees. So please consider chucking a few digital pennies our way by clicking on this link. Thanks!
Next Page »