: The A-Team seems like a real men's movie, a real boy's club. It must have been a lot of fun to shoot? 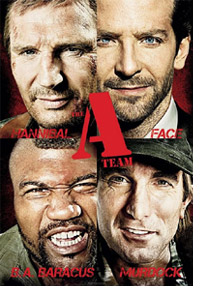 : Was there a feeling of camaraderie on set between you four guys?

: What was it like working with Liam Neeson? Did he take you under his wing?

RJ: Liam was real cool. Everybody knew that I was new on the scene and didn't have a lot of acting experience, and he walked me through a lot of things and he helped me out. He's real cool.

: How was it working with Sharlto Copley? B.A. and Murdock have quite a fun relationship.

RJ: Sharlto and I, we actually got on the most, we got on the best. He's the one I talked to most. Every now and then he'd call me up on the phone, then I'd call him up on the phone. We're like the two biggest fans of The A-Team out of the four. We got along great.

: Did you enjoy working with Bradley Cooper?

: [chewing my fist] Did you rewatch any of the old episodes to prepare?

RJ: Well I watch them all the time, you know? It's still playing in the UK, right? Whenever I was down here I'd watch it, the DVD box set. I'd watch it whenever I had the chance.

: Were you frightened you might not be able to do the show justice?

: Was it fun doing weapons training on set?

RJ: Yeah, I did weapons training, with a, uh, I don't know what you would call him... a teacher, I guess. He taught us a lot and he was real fun. I'm still friends with the guy today, he's a British guy, he's real cool.

: What's the connection between B.A. and the iconic A-Team van?

RJ: He's had to wait a long time to see it again. He's got a good relationship with that van, yeah!

: How was it working with Jessica Biel?

RJ: Jessica Biel was real cool. She's real down to earth, such a lovely person. She kind of makes you feel like she's your next-door neighbour, that you grew up with. Some hot chick that you grew up with your whole life, so you're used to her. She's just that girl, real easy to make friends with.

She's a great actress and she had great energy and I just loved being around her. She'd be around all day, but we never had a scene together, so I don't really know how it is to work with her, but we were in the make-up trailer together two or three times and there's a great energy about her. She was basically one of the guys.

: Do you have a favourite memory of shooting the movie?

: Right. When did it hit you just how big the movie was? It's a huge production, with a massive budget, huge action scenes... when did you realise what you'd let yourself in for?

RJ: It probably hit me about two months in, I guess, when I was ready to go home. I was like, 'Are we done yet?' It was just a long shoot. As I said, I've only done small movies. I didn't know it was going to take 12 months to shoot that movie. 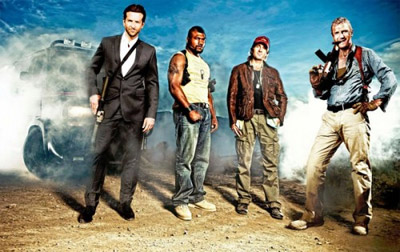 : Did you actually shave your head for B.A.'s iconic mohawk?

: Did it help you get in character?

RJ: No. I don't need that. I'm not a seasoned actor, I don't need nothin' to get into character. Once they say 'Action!' I just read my lines. There wasn't really much getting into character or nothing like that. [garbled noises]

RJ: [now clear] I'm just trying to keep my ear away from the phone.

: I'm almost done. Were there any pranks played on set?

: No one playing jokes on each other or anything like that?

[At this point, my pre-prepared questions had run out. That's why the next question is so terribly long-winded]

: [quickly] Are there any other TV shows from the same era as The A-Team that you'd like to see made into a movie?

RJ: No. I think they did everything already. I would like for them to remake He-Man the cartoon into a movie. [shouts at a random person in the room] They already did that, made it into a movie, but I don't think they did a good job.

: They're making a new He-Man movie! You should audition!

RJ: Are they? [laughs] He ain't ghetto, there ain't no black folks in He-Man!

: Now's the time to change it!

: Nearly done. How does it feel to have your own A-Team action figure?

: What do your kids think about their dad appearing in a big movie like The A-Team?

RJ: They don't even know. I'll take them to see it when it comes out, but my kids are so young, they don't really know.

: How do you plan to juggle your fights in the UFC with your new role as an action hero?

RJ: I'll cross that bridge when I come to it. That's the last thing on my mind right now.

: After playing B.A., are you thinking about an acting career long term?

RJ: Yeah, I got a couple of other movies coming up that I'm thinking about. Right now I'm just focusing on my fight, so I'm not even talking to anybody, or doing any deals, I'm not doing anything right now. My muscles come first, and if you don't get that right, you're gonna get hurt, right?

: Is there any truth to the rumour that you might be playing Snake in the remake of Escape To New York?

RJ: Never even heard about it. I don't know anything about it.

: Are you signed on to do any A-Team sequels?

RJ: I don't know about that either.

: Where would you like to see the writers take B.A. for an A-Team sequel?

: [sigh] Well thanks a lot for talking to me Rampage, I know you're busy with the fight, and best of luck with that. I look forward to seeing The A-Team.

RJ: Thanks. Bye.
The very next morning, I went and bought a proper dictaphone: one that doesn't beep. He was actually quite a nice chap, I think he was just knackered from whatever his training consisted of, and wasn't really in the mood to chat. Oh well. Bradley Cooper next.

Excerpts of this interview were originally published in Total Film magazine
More:  The A-Team  Rampage Jackson
Follow us on Twitter @The_Shiznit for more fun features, film reviews and occasional commentary on what the best type of crisps are.
We are using Patreon to cover our hosting fees. So please consider chucking a few digital pennies our way by clicking on this link. Thanks!
« Previous Page