So a while back, I was asked to interview the guys behind The A-Team (everyone except Liam Neeson) for a magazine article. I figured I might as well post the entire things this week for you fine people.

Sharlto Copley was probably my favourite of all the A-Team guys I spoke to. I've not interviewed a more humble actor before, and there was a refreshing lack of bullshit in his answers. He really appreciates that he's incredibly lucky to be doing what he's doing, and that showed in his demeanour. Oh, and I challenge you not to read his answers in his accent. 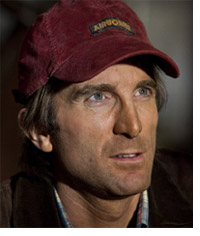 : Hey Sharlto. First off, a confession: I'm a huge, huge fan of District 9, it was my favourite movie of last year. So congratulations with that.

Sharlto Copley: Thanks a lot, man. That's great. That really means a lot.

: Do you want to walk us through how you actually got hired for The A-Team?

SC: It actually happened through Jules Daly, one of the producers, who saw an early screening of District 9 and she had this idea that I would be good for Murdock. I don't know how she made that connection from Wikus because she didn't actually know that I do different accents and voices and characters and stuff. It was the manicness of Wikus or something, I don't know. Then she got Joe C [Carnahan, director] into a screening and he agreed with her.

Then I heard that I was really on the top of their list of people they were interested in. I was in Austin, Texas and I shot a series of scenes which I called 'Things that could happen to Murdock in his hotel room' in my hotel room and edited them together on the plane while we were doing the publicity tour. I sent those scenes to Joe and that's how it happened. I was very familiar with Murdock and the show and I just knew I could bring the right kind of energy. I felt very strongly that I could do something interesting, so I did something kind of demonstrating my range and what I thought Murdock would be like.

: I really, really hope those scenes make it to the DVD...

SC: So do I, and I think they will! I did one more test that was in character, and it was all improv; it was Murdock doing his thing, like, being interviewed by guys in an insane asylum, and that's what I showed Dwight Schultz [The original Murdock] when he came to the set.

I thought, well he's not going to see me do much on set, but I want him to see because it was all improvised and all coming from me and how I saw the character. Obviously you can't control how it's going to come out in the film but I just wanted to get his blessing on my take of it.

: Was Dwight cool with it?

SC: I was shitting myself to show him, I really was. It was probably the most starstruck I've been out of all the people that I've met, because you are playing the guy's character. We had a great lunch, it's all gong really well, but in the back of my mind, I'm going, 'Look, you've got to show him the tests' and part of me's going, 'Don't do it, don't do it!'.

It's going so well, so I showed him in my trailer and I was standing behind him and I heard him giggling every now and then. Then he turned to me with tears in his eyes and he gave me a hug and said, 'You are Murdock'. It was such a moving moment, it was like no matter how the movie comes out, no matter what anybody thinks, if I got his seal of approval I feel like I've done my job.

: What kind of influences did you draw on for your take on Murdock. There's a bit of Rain Man in there, isn't there?

SC: There's a few different things, I don't know if I'm allowed to tell you the one that isn't on the trailer but yeah, I did draw on one or two things. I wanted to do as much of that sort of stuff as possible and was pushing to have the character close to the original guy whenever I could. Using the different voices and the different accents and a couple of those things have made it into the final cut of the movie, but I'll keep it as a surprise as to which. There's one main one in particular that's like Murdock used to do, from famous things. 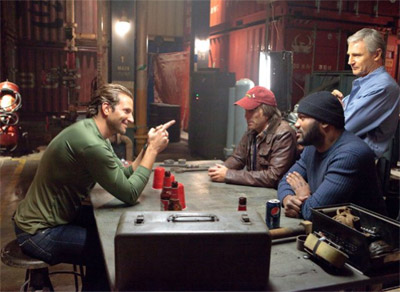 : What was it like working with Liam Neeson? He's a hell of a guy, right?

SC: He was awesome man, he's the absolute professional. I was on, like, movie two. He's done, like, 50. You could feel the difference, he definitely had that presence of someone who was a real kind of veteran and almost a leader in that sense for us. I think that dynamic worked.

Liam and I lived in our trailers for the first four weeks of the movie. We were shooting out in the bush and we were staying out in these motels so I said on the first night, after we'd already spent one night in the motel, 'Guys, we have to drive all the way back...' I was so impressed with the incredible trailers, coming from District 9, I was like, 'Couldn't we just stay in our trailers? Why wouldn't we just sleep in the trailers?' Sharlto, you're making a really wrong, politically incorrect statement, no one normally does that. [laughs]

I sort of made it as a joke and threw it away, but Liam was kind of like, 'Could we actually do that?' Thanks to him, we ended up staying in our trailers and every night he'd have a BBQ at his trailer. Usually Bradley [Cooper] and Ramp [Rampage Jackson] would join us and then go back to their motel, but him and I really did that whole camping out in the bush thing... in a luxurious trailer, of course.

: You got on really well with Rampage, didn't you?

SC: It was very fortunate man, we just clicked early on the process and because we also spent more time together, we had more time to get to know each other. We were really massive fans of the original show, the two of us. My favourite two characters were BA and Murdock so were his, and so both of us wanted to do well with it and honour that, it's a big part of your childhood.

TV in those days... it just doesn't quite feel the same way now, the market feels so massively oversaturated. But shows like that and big movies and big shows from my youth are big parts of my memories. I just wanted to try and at least do my part and Rampage felt the same way. We have a very similar sense of humour, we had the crew in stitches a lot of the time messing around.
More:  Interview  Sharlto Copley  The A-Team
Follow us on Twitter @The_Shiznit for more fun features, film reviews and occasional commentary on what the best type of crisps are.
We are using Patreon to cover our hosting fees. So please consider chucking a few digital pennies our way by clicking on this link. Thanks!
Next Page »