: It looked like it would have been a really fun shoot...

SC:A lot of that comes from Joe, he's a very interesting guy. He's a very strong, alpha male guy which you need in a situation like The A-Team, where you have, like, four alpha guys in your cast and everyone's got very strong views.

He'd put music on set all the time. There was always music between takes, sometimes when we were doing takes there would be music. He had a loudhailer, we called it the Voice Of God, where we'd be sitting on the set quite a long way away from Joe, but there'd be speakers and Joe can hear you because you're mic'ed up. We'd be talking to ourselves and you'd hear, 'I can hear you guys!' We were like, 'Shit, hey Joe, how's it going!' He's actually all the characters in The A-Team rolled into one. 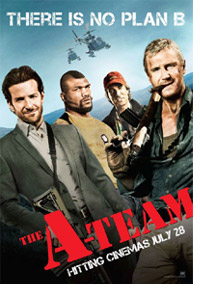 : Are you one for practical jokes on the set? We hear you had fun with Jessica Biel...

SC:I would always say, 'Joe, let me do your one, then let me do one for Fox that's in the script, then let me do my stuff' and Joe was awesome that way, he's was like, 'Okay, you can do it, do whatever you want'. It's a scene where Jessica is coming to try and interrogate me, and I'm meant to just sit there in a comatose state, but in this particular take I just looked at her and sort of changed character completely, did a different voice, a different whole thing and thought she was a stripper.

So I was, like, 'Okay darling, dance! Did you put her up to this, guys? Okay, one dance!' [Jessica] was just looking at me not knowing what the hell to make of it, so I just jumped up and started doing Justin Timberlake's 'Sexyback', or my best interpretation of it [Biel and Timberlake are an item]. And I had this gown on and pulled the gown down. She held it for as long as she could, it was so priceless because she was really trying to stay in character, she didn't snap out of it until she just couldn't handle it any more and just burst out laughing. It was awesome, it so much fun.

: Do you have a fondest memory of the shoot?

SC: Not a single favourite memory, but there were a lot of things that stood out. Just for me overall, the relationship that I set up with Rampage had been really special, just to make a really good friend in that process; it's something that I guess I'll always take away from The A-Team.

There were a lot of crazy moments where I would just pinch myself. I would walk onto set, the American miltary base that they set up, and the scale of the place was... they had Black Hawk choppers and Humvees and massive tents, and you go inside the tents and there's stuff inside the tents too. You're like, 'Are we using this?' and they're like, 'Well you never know, we might be.' I would pinch myself just to see how crazy my life had become. I had those moments regularly where I would think, 'God, I'm in a movie based on The A-Team'. I loved it so much as a kid.

: Rampage told me this could be the manliest movie ever made. Is that a fair assessment of The A-Team?

SC: [laughs] There is a lot of testosterone going on but I think there's also a lot of fun. What makes a difference with The A-Team is there's a playfulness to it. I haven't seen The Expendables or anything yet, but I get the feeling that what The A-Team has which a lot of these other action films don't have is a playfulness. Yes, there's a lot of testosterone flying around, but we maintained a lot from the original A-Team. It's not Hurt Locker realistic.

: You've had a crazy career so far and you're only two movies in. Where do you go from here?

SC: I do feel an enormous sense of fulfilment just having done District 9, that was such a personal project to me. My dream was to be involved with a project that did well commercially, internationally, that reached a lot of people and moved and entertained a lot of people. That was always interesting to me. Critical acclaim and those things had very little interest, that was just a nice bonus.

I always had this feeling, I've been working since I was 19 years old, chasing that dream, so there is a sense of fulfilment I guess. I feel like the rest of my career, I want to try and have fun. I know enough about life and I was old enough when this happened to me to know that things go up and down and I'll do a film that doesn't work and bombs and everyone goes, Oh, why did he do that character?' or whatever, but that's how it goes, you go up and down.

I'm in a good situation in that I don't have to take stuff, if the character doesn't fit right with me or I don't feel like it's worth doing. I don't have that same ambition, that I must be the best, I must do a movie that makes 600 million dollars. A lot of people in Hollywood get stuck on that. As soon as you've made something great, that lasts 15 minutes and then you go, 'Okay now what are you going to do?' 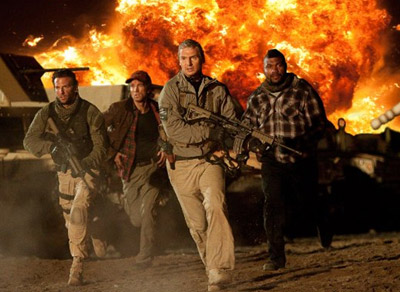 : Finally, I can't pass up an opportunity to ask about a possible District 9 sequel. You must be sick of people asking about it.

SC: I love the fact that people are still so interested in that and keep asking because it's something that I would absolutely love to do and I know that Neill would love to do it too. I think it's a timing thing, it's up to when Neill feels like he's ready and wants to go back to that world. He is working on another movie now. Hopefully, like I've said to other people, when he's done with the film, my hope is that we'd be able to go back to Joburg.

: Are we going to see the movie widen its scope? Maybe see the prawn homeworld?

SC: Anything from this point is all up to what Neill is going to do. Certainly I think that whatever he does will be interesting, but I know him well enough to know that he wouldn't make a sequel unless he felt, almost like James Cameron did with Terminator, that he could make something that was as good if not better, wherever it was set.

From the chats that we've had, certainly it seems like he would do it again in South Africa, because that is the whole world. That's where you have this whole new world, that's his original vision and we've really just scratched the surface of what's going on. There was so much back story and side story and everything going on in the world, so I imagine it would stay on Earth at this point. But you never know with Neill, he's a genius, he could come up with something tomorrow that changes that.

: Sharlto, it's been an absolute pleasure. Best of luck with The A-Team and I look forward to more District 9.

SC: Thanks, man! Me too!
Nice guy, huh? I tried to get him to say 'fock' but couldn't work it into the conversation. I'll try and get my Rampage Jackson, Bradley Cooper and Joe Carnahan interviews up this week too.

Excerpts of this interview were originally published in Total Film magazine
More:  Interview  Sharlto Copley  The A-Team
Follow us on Twitter @The_Shiznit for more fun features, film reviews and occasional commentary on what the best type of crisps are.
We are using Patreon to cover our hosting fees. So please consider chucking a few digital pennies our way by clicking on this link. Thanks!
« Previous Page