Alternative ads for MUBI, the streaming service that thinks you're a prick

Before today, every mention I've ever heard of MUBI - the streaming service that specialises in independent films and classics - has been positive. Now, thanks to a snobbish new ad campaign, MUBI is a service that's even more despised than Amazon Prime. THAN AMAZON PRIME. You guys need a new marketing spin and I'm more than happy to help.


The hubbub started on Sunday night, when a photograph from the tube was shared on Twitter. The picture showed a movie ad from MUBI, which reads as follows: 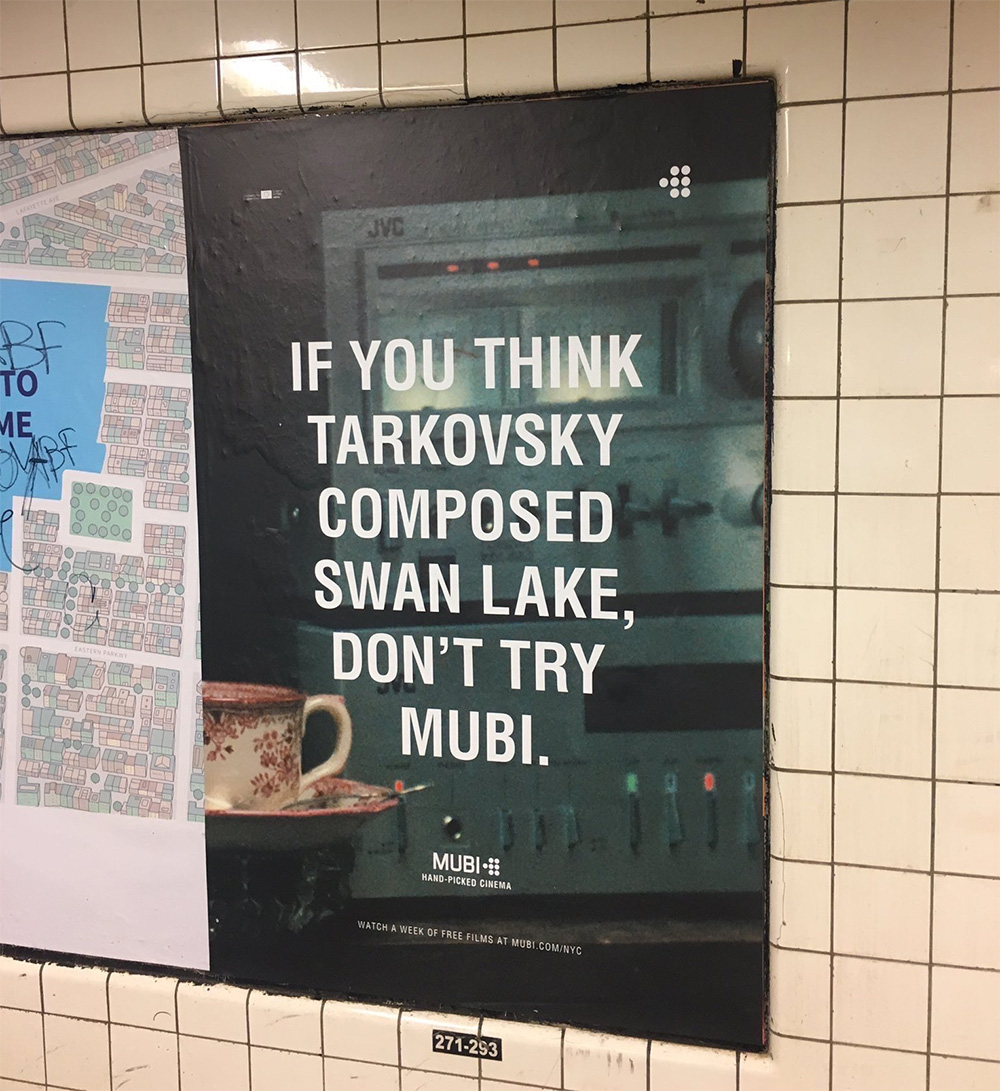 Real smart ad campaign, you guys. Don Draper would be proud. Treat 'em mean, keep them keen. Presume your customers are all idiots and look down on them at all times, then- wait, this isn't how Don Draper makes his advertisements: it's how he treats his women! You've got this whole thing backwards! Not to worry, I'm sure it was just a one-off. You can't always convey tone on a tube poster. I'm sure a full-page ad in the newspaper will have a more inclusive mes- 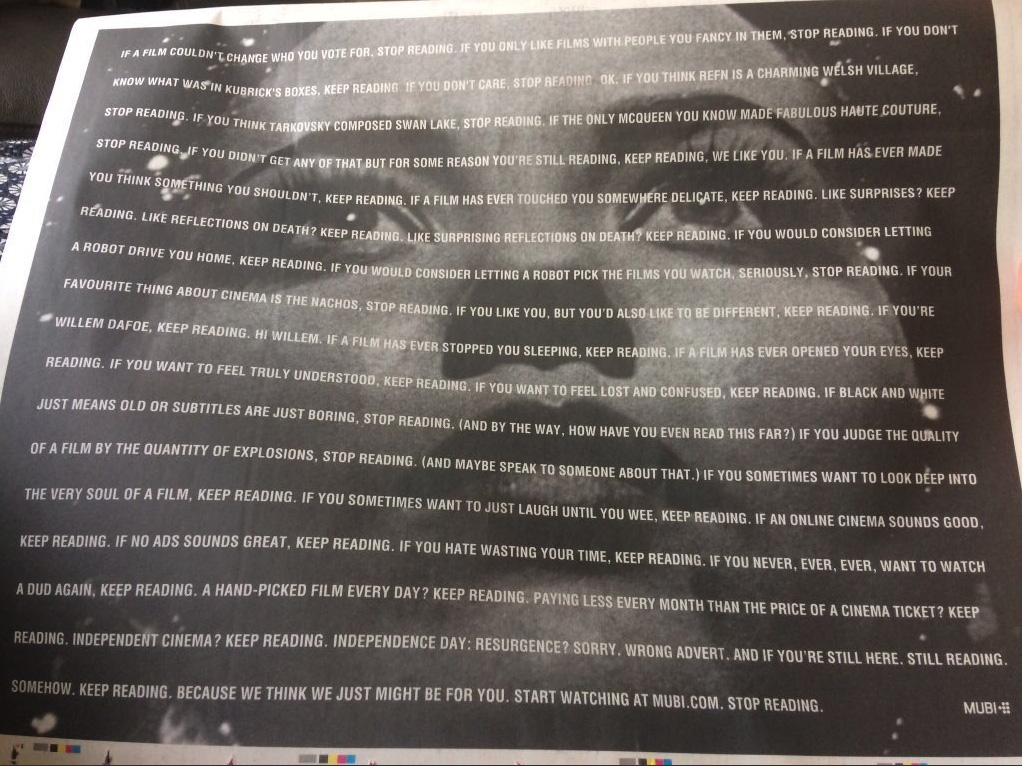 How can you even read at all, you idiot idiot fuckin IDIOT


Okay, so it turns out MUBI is run by a bunch of pretentious arseflutes who would rather self-immolate than watch one more second of Transformers: The Last Knight. I've never seen such a self-defeating ad campaign. Who is this aimed at? The people you're describing - punters who might confuse Tarkovsky with Tchaikovsky, ha ha those fucking idiots! - are being told not to bother. I never passed Marketing 101, but are these not exactly the sort of people that you should be aiming your service at? Or are you trying to establish a commune of insufferable, fart-huffing Observer readers?

Anyway, I got bored trying to figure out exactly how this got signed off and instead decided I'd much rather make fun of it. Here, MUBI, you mongrels: if you're going to be elitist snobs, you're going to need to make a proper go of it. Go the whole hog! Neckerchief up! Use these alternative ads and really establish yourself as the streaming service for the socially inept and cripplingly lonely! 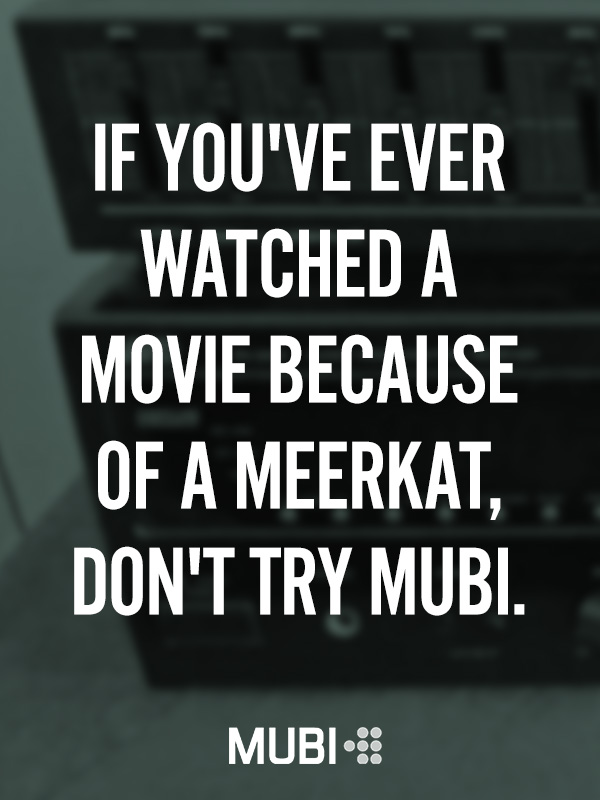 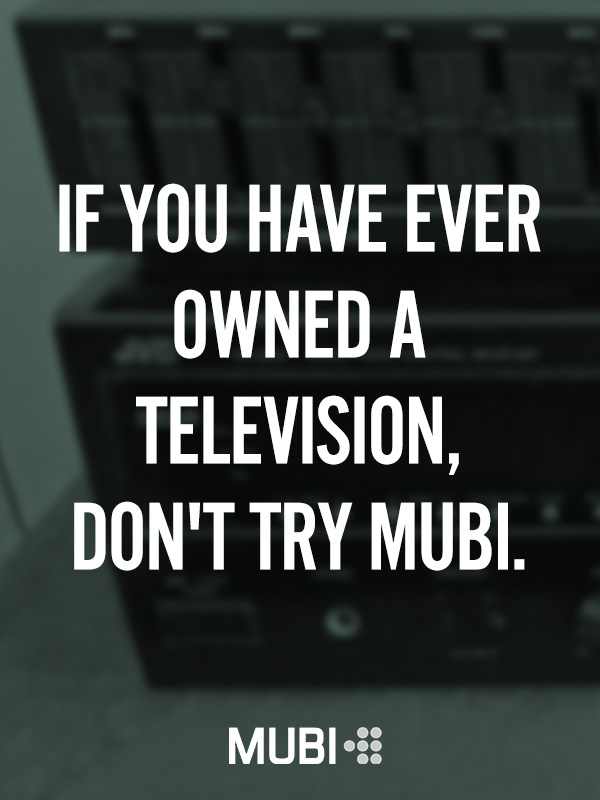 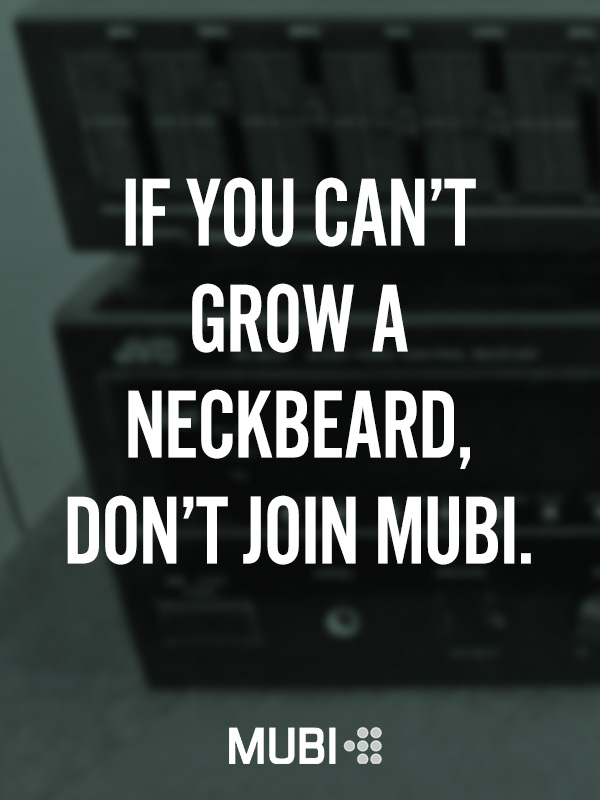 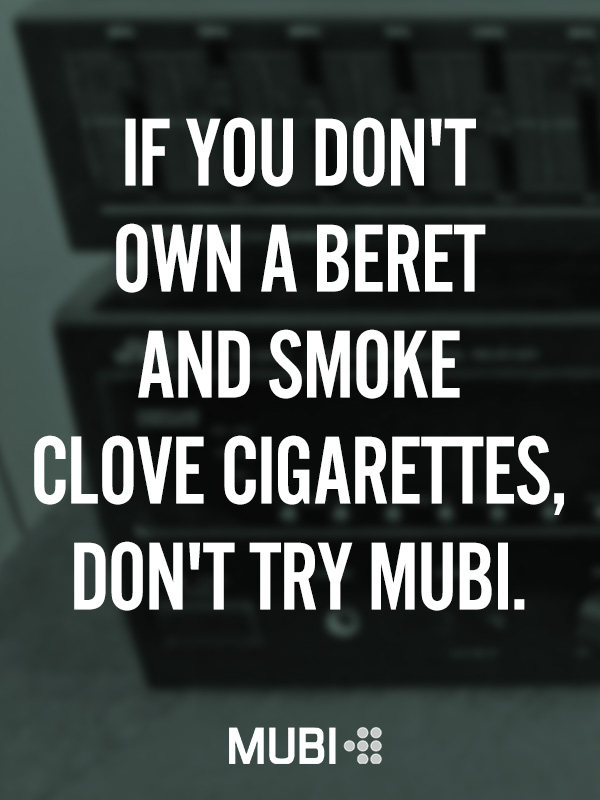 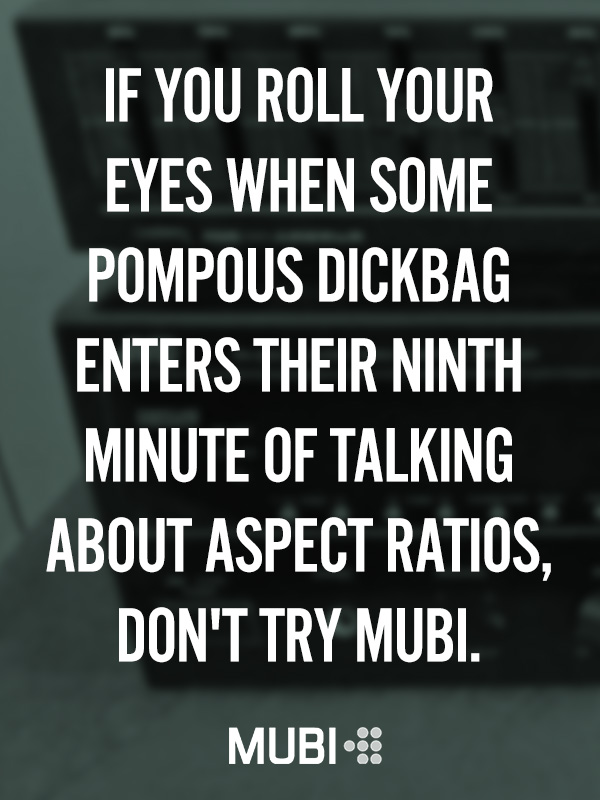 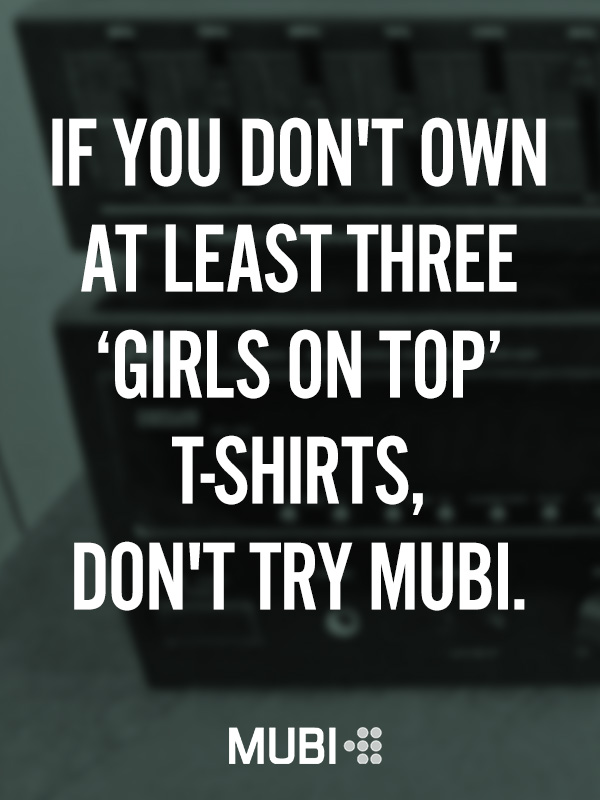 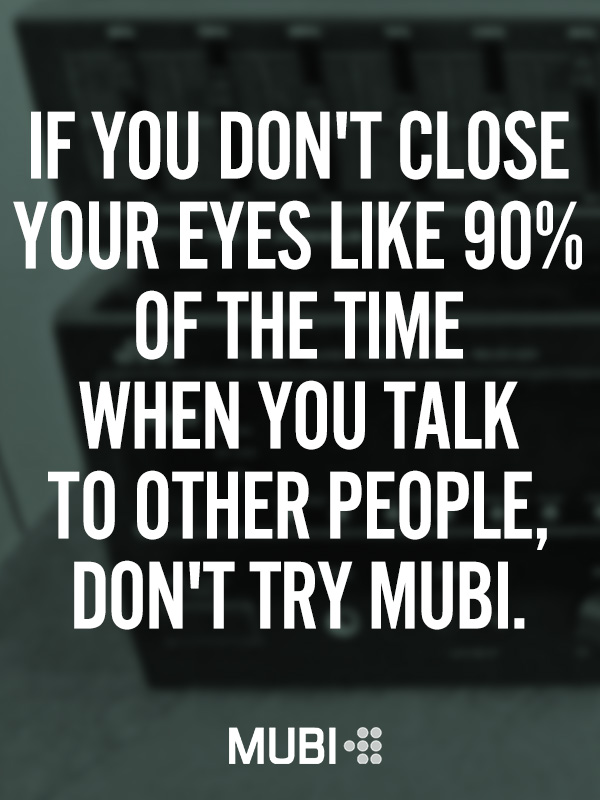 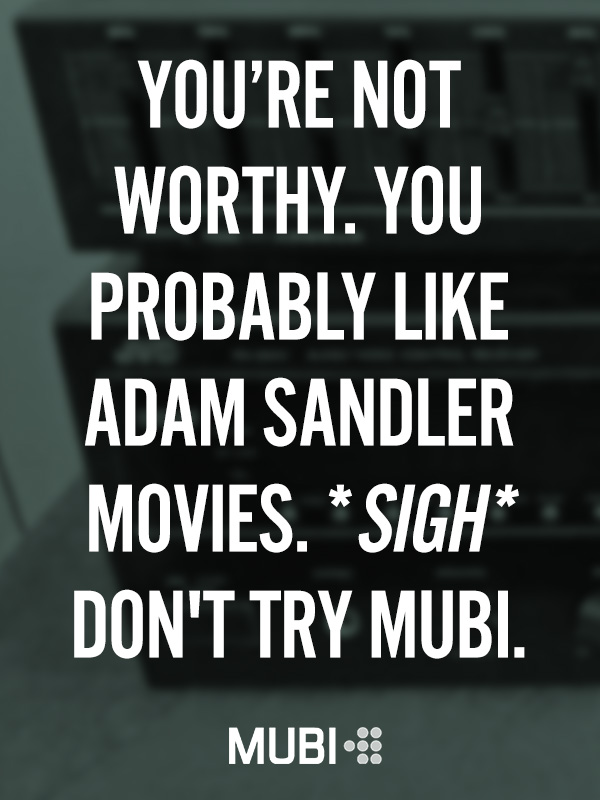 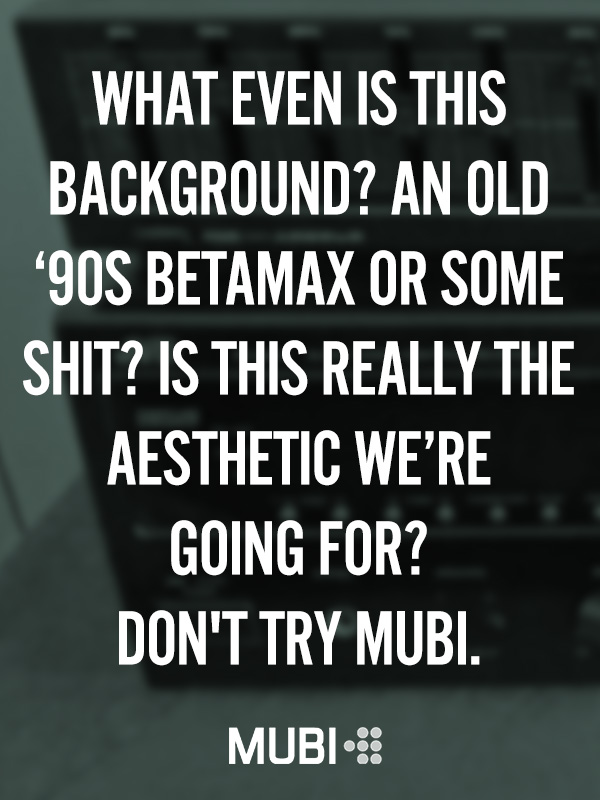 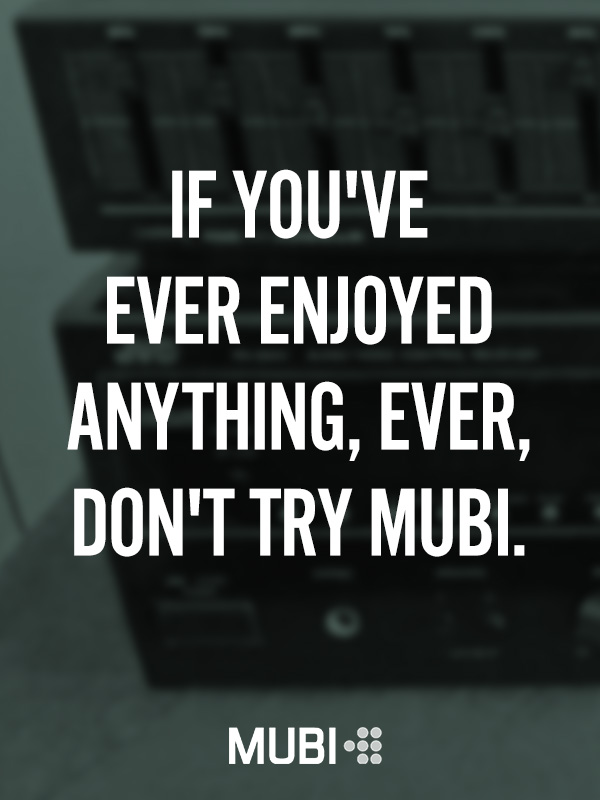 More:  Mubi  Top 20
Follow us on Twitter @The_Shiznit for more fun features, film reviews and occasional commentary on what the best type of crisps are.
We are using Patreon to cover our hosting fees. So please consider chucking a few digital pennies our way by clicking on this link. Thanks!