Welcome to a new semi-irregular feature in which I try to understand my general ambivalence towards the Coen brothers in the face of their overwhelming success and popularity. Do I lack the critical faculty to truly appreciate their work? Do I just not ‘get’ them? Am I an idiot? Most likely, yes, but let’s all go on a filmographical journey to confirm!


Let me first clarify a couple of things and try to nip any potential Twitter beef in the bud. Yes, I’ve seen and love The Big Lebowski. Yes, I like Fargo a lot. No, I don’t think everything else is terrible - I have enjoyed many a Coens film, it’s just that most of them kind of wash over me in a general haze of quirk and circumstance without me ever really being invested in anything that happens.

And yes, I understand that might be the point, and that all film enjoyment is subjective and relative anyway, but I can’t help wonder if I would have a greater appreciation for their work if I had more familiarity with it... because as it turns out there are some pretty big gaps in my knowledge of the Coen Brothers' oeuvre. So here’s me trying to address that, film by film, in release order, as I get round to watching them.

Starting with my first watch of their feature-length debut, Blood Simple, which I think is about a deadly alien virus or something, I dunno. 34-YEAR-OLD SPOILERS FOLLOW.
"I'm supposed to do a murder... two murders... and just trust you not to go simple on me and do something stupid?" 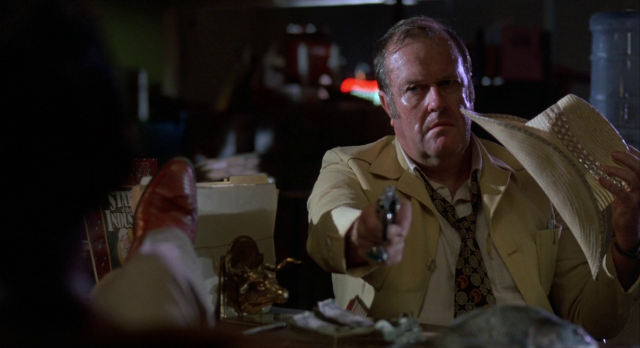 On first impression, I’m mostly impressed at how confident this film is for a directorial debut. I was expecting a rough-around-the-edges thriller that smacked of ‘film student’, but this feels like a fully formed Coen Bros movie before they had established what that really was.

In following a film noir plot template - as I know the filmmaking brothers often do - this debut is surprisingly taut and concise compared to my impression of their later work. And this is despite a deliberate reliance on complicating the situation at every turn.

For the sake of a reminder - and so that I can discuss certain moments in detail - here’s a summary of all the major plot beats: jealous bar owner Marty hires private dick Visser to kill his cheating wife Abby and her lover Ray, but the grotesque investigator turns the table on Marty, presenting him with fake evidence of the hit before simply killing Marty for his money, leaving Abby’s gun at the scene to frame her. Ray then discovers Marty’s body and Abby’s gun and, believing she killed him, tries to dispose of the body. Only then Ray discovers that Marty isn’t actually dead, so he finishes the job by burying him alive. Long story short, Visser ends up killing Ray with a rifle and tries to shoot Abby too. Abby ends up getting the upper hand and finishes off Visser, but as she is completely unaware of the events before this scene, actually thinks it is Marty she has killed. By the end, one thing is clear: all this blood has been far from simple. 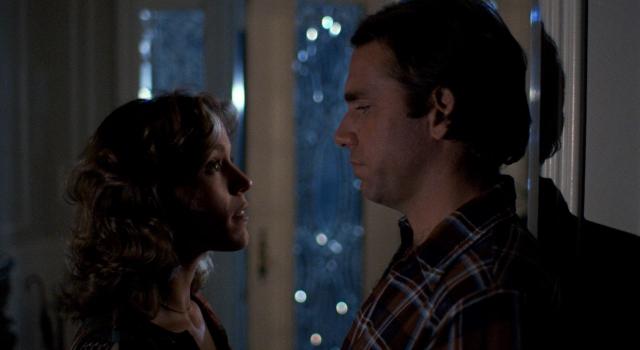 All because these two wanted to bone.


There are recognisable themes here that are now synonymous with the Coens’ work, with unpredictability and misperceptions being particular key elements throughout. But, even with this unravelling narrative of complicated developments, the fact that the focus is on just four characters and the minimal interactions between them gives the movie a clearer drive than in the more convoluted plots that come in the brothers’ later movies.

This clearer structure also gives the film room to breathe. With stretches of scenes playing out with very little dialogue, Blood Simple shows impressive assuredness when it comes to pacing and having faith in its actors’ performances to carry the story. It all adds up to a steady, cleverly crafted film filled with the kind of perfect tension build and release that you usually only see from more experienced filmmakers.

"
"
This constant problem of not seeing the whole picture is something that clearly brings out the Coens’ dry sense of humour.
In some ways, this adds to the sense of complication, in that no one’s motives are particularly well highlighted. Instead the viewer is expected to understand each player’s perspective on what’s happening without it being explicitly called out. It’s a show-don’t-tell approach that’s incredibly effective here; when Visser shoots Marty, we have to play catch up with his plan, and when Ray and Abby argue, we have to understand that he thinks she has killed Marty and is hiding that fact, and she thinks he has had an angry confrontation with Marty that has led to a fight.

Both are incorrect, of course, and this constant problem of not seeing the whole picture is something that clearly brings out the Coens’ dry sense of humour. The recurring line “It's taken care of - the less you know about it, the better” is repeatedly disproven, for example, and there’s clear irony in the fact that Abby is the only survivor of the whole sorry situation despite being the original target, with no knowledge of any of the major events that we as an audience have witnessed. 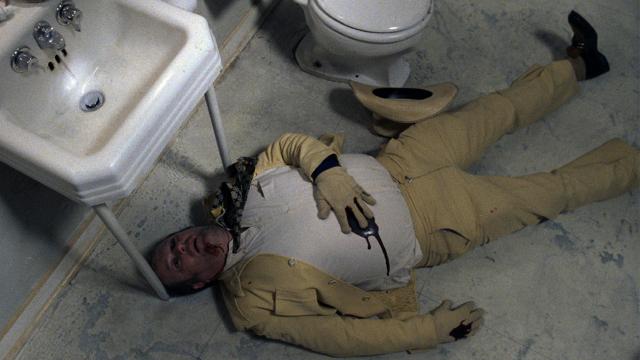 'Twas the irony that killed him.


This main theme of being in the dark - quite literally for Abby at the end of the film as she smashes the lights out to hide from ‘Marty’ - feeds into the mantra that Visser delivers in the opening voiceover: “I don't care if you're the pope of Rome, President of the United States, or Man of the Year; somethin' can all go wrong”. I have a feeling that, as I continue with this viewing experiment, this is going to end up being a theme I see a lot.


Overall, this first watch of the Coens’ first film, and my first effort in trying to find a way to better appreciate their work, has been a huge success because I dug the hell out of this movie. In fact, I’m already kind of regretting coming at this whole project from the angle of a non-fan.

If nothing else, I can already see why critics find it easy to champion their work, because if this film is anything to go by, the Coens wear their thematic talking points on their sleeve. I can already imagine myself in a student bar telling everyone that the three bullets shown in Abby’s gun at the start of the film, as well as the three hooked fish slowly rotting on Marty’s desk throughout proceedings, all act as excellent foreshadowing for the final kill count because I totally get symbolism.

Onwards then to more noir thriller territory in... (*checks imdb*)... Raising Arizona. Which I also haven’t seen before.

More:  Am I Coen Crazy  Blood Simple  Coen Brothers
Follow us on Twitter @The_Shiznit for more fun features, film reviews and occasional commentary on what the best type of crisps are.
We are using Patreon to cover our hosting fees. So please consider chucking a few digital pennies our way by clicking on this link. Thanks!