My casual, long-term project of watching all the Coen Brothers’ films in order has stepped up a gear after just one film thanks to finding out that The Big Lebowski is being re-released at the end of September for its 20th anniversary. And if I can’t time my retrospective to coincide with everyone else’s in that week then really I miss my only opportunity to make any of this appear relevant.

So on to Raising Arizona then, a film that I had not seen before and - to be honest - I have had no interest in seeing despite it being classified as one of the greatest comedies of all time, being often listed as one of the ‘1001 films you have to watch before you die’ or whatever, and having a Rotten Tomatoes score of 91%. To be honest, I’ve had opportunities to see it, but I have always opted to spend that 90 minutes flicking through Netflix for something else to watch instead.

Until now, that is. Was I right to think that the Coens’ second film isn’t for me? Read on to find out. Although, spoiler: yes, I was right. MORE SPOILERS FOLLOW.
"They’ve got a name for people like you H.I. That name is called ‘recidivism.’" 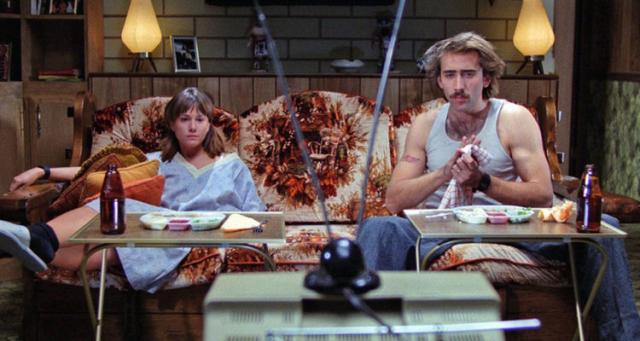 While I was surprised by the assured maturity that the Coens delivered in Blood Simple, I’m as equally surprised to find the exact opposite here. An obvious, deliberate departure from everything about their first film, this time the Coens offer something wild, anarchic and eccentric, but most of all something that feels wholly immature. This is the directorial debut I was expecting the first time around. You can almost imagine the Coens thinking “Fuck you, so-called Hollywood Masters, you absolute squares. We’re going to blow your freaking minds and do things with our cameras that you’ve never dreamed of” while they fix their Panaflex Platinum to a skateboard.

It feels showy and crude; it has all the energy and originality that so often makes for an early calling card for a long, credible career, but with the same sense that it would all benefit greatly from more experience. It’s great that Joel and Ethan have all this natural talent and raw energy, here, but maybe, in time, they can learn to channel it a little better, maybe take a more studied approach to their filmmaking, and maybe watch fewer Looney Toons cartoons.

Suffice to say that I didn’t really get on with this film. It made me feel like my brain fell off a cliff into a canyon and then had a large Nicolas-Cage-shaped anvil dropped on top of it.

But I realise I’m on the wrong side of film criticism here, after all *I* don’t have a tomatometer score of 91%. So let me get back to what this whole project is supposed to be about: why do I seem to lack an appreciation of otherwise critically lauded films by the Coens? Is it because I’m a just a massive cock-trumpet?

First of all, though, it’s not that I didn’t find anything to love about Raising Arizona. As with, Blood Simple, it’s easy to see how the Coens weave important themes into their narrative and it’s a film bore’s dream to have so many echoes of ideas play out in the film, ripe for picking up and showing off to anyone in unfortunate earshot. Or ‘blog-article-shot’.

Let me show you what I mean. Imagine the next two paragraphs being read to you by Mark Kermode. Or that twat who presents Grand Designs.

The film starts with a repetition of cycles, as Nicolas Cage’s repeat offender H.I. ‘Hi’ McDunnough returns to prison to face Holly Hunter’s ‘Ed’, before serving time, and then being released to commit a crime and go through the whole thing again. This ‘recidivism’, as called out in Hi’s parole hearing, is a key marker throughout the film, with repeat shots, frames referencing earlier frames and repeating montages. All of this, just to emphasise Hi’s self-destructive cycle and highlight the struggle he faces in trying to break free from it and have a normal life instead. Even Ed’s repeatedly barked orders to “Turn right!” every time Hi steps up for a mugshot is a direction that, if taken to the extreme and HI keeps following every time he hears it, sees him back to where he started. At the same time, it can also be seen as a plea to literally start doing ‘right’; to start abiding by the law.

As the film progresses, and Hi and Ed kidnap l’il Nathan Jr from furniture magnate Nathan Arizona, focus turns to Hi’s anxiety about becoming a parent. His escaped prison mates, the Snoats Brothers (John Goodman and William Forsythe), are the buddies openly making fun of him for being under Ed’s thumb. Meanwhile, his boss Glen (Sam McMurray) has the illusion of domestic bliss while brazenly neglecting his kids and then later revealing that he and his wife Dot are swingers, showing Hi that the only way they can seek satisfaction in their long marriage now is through other people. All of this amounts to Hi’s nightmares, which then literally manifest into bounty hunter Leonard Smalls who comes to take the baby away because Hi (rightfully) doesn’t deserve him. The fact the Smalls reveals a near identical tattoo during their climactic showdown proves that he is a part of himself that Hi has to kill in order to be settled and happy, which ultimately he does and is. 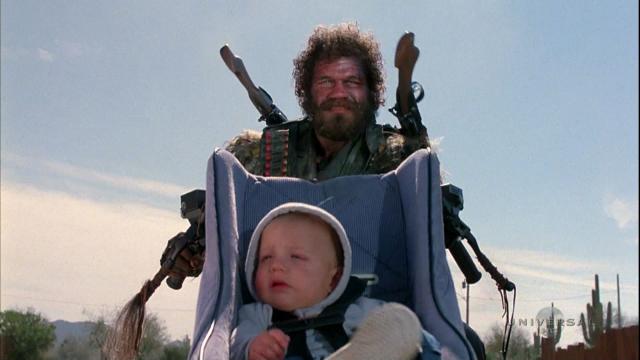 If only Nicolas Cage played both roles.


As ideas, these are cleverly played out throughout the film and it is easy to see how the script constructs these moments to play off the themes at every turn. But other key areas are overlooked at this expense. Chief among the problems for me is that fact that Holly Hunter’s Ed gets completely sidelined.

It seems to me that Raising Arizona struggles in knowing who its protagonist is. Clearly the story is told from Hi’s perspective, with him narrating at the start and end, but outside of this logic, the narrative that unfolds presents Hi and Ed as equal partners in the story. The events that happen in this film, happen to both of them, but the focus is always on Hi, despite Ed having an equally interesting arc. She is the moral opposite of her husband; where Hi is a repeated criminal trying to be normal, Ed is the law-abiding police officer resorting to criminal activity… and at no point does it feel like that, or the juxtaposition between her journey and Hi’s, goes explored. Instead, Ed goes from heartbroken law-woman to lovestruck bride to nagging wife and mother, and she is defined at various points purely by her emotions, her infertility and her annoyance. Maybe, I’m judging the film through a more modern lens, but this seems like unfulfilled potential that comes directly as a result of the Coens’ erratic storytelling here.

Either way, I realise that a screwball comedy probably shouldn’t be analysed to this extent, and that I might as well be writing a dissertation on Nicolas Cage’s hair, but all of this really is for me to try to explain why I just didn’t find it very funny. At least not apart from the one thing that the Coens aren’t directly responsible for: the performances.

In terms of the direction, the camera is frequently let off the leash here, wildly moving around events with abandon as the Coens relish cracking their knuckles on every trick at their disposal. In the scene where Hi sneaks into the quintets’ room to abduct one of them, everything is exaggerated to represent the perspective of the baby. Oversized props and wide-angle lenses make for a deliberately ill-proportioned outlook, while low angles and an instance where the camera bobs up and down in time with a cuddled baby mimic the infant’s actual POV. All of this shifts focus from Hi’s bumbling attempt at kidnapping mid-dilemma – something that is funny enough on its own – to a more basic Don’t Babies Do The Funniest Things.

And don’t even get me started on the Snoats emerging from their escape tunnel in a way that simulates childbirth. It’s just eye-rollingly crass. 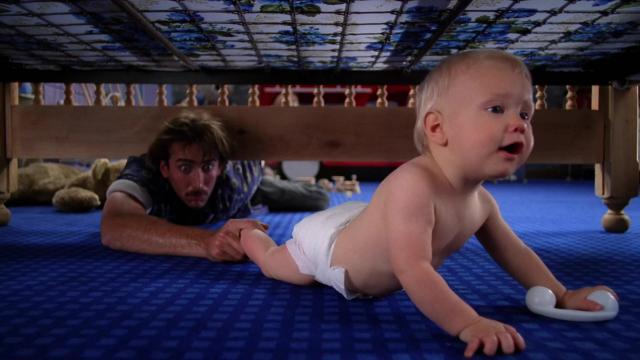 The Coens paying homage to Baby’s Day Out seven years before it came out.


On the plus side, all of the performances are fantastic, and I can see how the Coens have a firm grasp on creating utterly indelible characters brought to life by a superb cast. Holly Hunter would be scene-stealing if that wasn’t also true of every person who walked into shot, while Nicolas Cage is brilliantly unrecognisable here. I can’t think of any other Nicolas Cage performance that I have watched while forgetting that I was watching a Nicolas Cage performance. This might be the only one.

So I give the film points for being hugely enjoyable in the acting stakes and, really just for seeing the Coens tackle much lighter material after their dramatic debut, but I also recognise that I sound stupidly patronising for saying that. Who cares about what points I give to a film generally regarded by the entire film industry as a classic? The only thing that needs to be said is that it wasn’t for me, and as I continue my way through the Coens’ filmography, hopefully I’ll get a sense of why I struggle with this kind of movie from them.


After just two films, my conclusion is that the Coens rely on an investment in plot rather than characters. Their eagerness to explore the unpredictable, the ‘anything can go wrong’ philosophy that has been present in both Blood Simple and Raising Arizona so far, means that as an audience we are expected to care about the reactions to events rather than the impacts of them.

So, if Hi got caught trying to steal Nathan Jr and was sent to prison again, if Ed left him to be a single mum, if Leonard Smalls claimed the baby back for Nathan Arizona, or if any other hundred possible plot points happened, it would only ever feel like the latest step in an unravelling rope ladder of a narrative with no real emotional anchor. I feel like I’m mostly seeing how one scene tees up the next rather than having any sense of where it’s all headed and what the stakes are in making that happen.

Anyway, that’s just after two films. See you in whatever the time between now and the re-release date for The Big Lebowski is divided by how many Coen Brothers films there are between Raising Arizona and The Big Lebowski. I will find this information in time, I promise. Either way, I know that next up is Miller's Crossing.

More:  Am I Coen Crazy  Raising Arizona  Coen Brothers
Follow us on Twitter @The_Shiznit for more fun features, film reviews and occasional commentary on what the best type of crisps are.
We are using Patreon to cover our hosting fees. So please consider chucking a few digital pennies our way by clicking on this link. Thanks!