Over Christmas, my stepsister's husband tried to palm off on me two tickets for An Evening with Hollywood Comedy Legend Chevy Chase at the Hammersmith Apollo, which he could no longer use. He'd paid £65 each. Obviously I wasn't going to take them face value: there was a decent chance it was going to be awful. Then last week he offered me a buy-one-get-one-free deal and the chance to leave a relative out of pocket was too good to pass up, so I went along on Saturday. It disappointed in the most incredible way.


My hesitation in taking them at all was down to the sort of evening I imagined: a slightly truculent Chase phoning in a night of tossed-off anecdotes, clips on the big screen and maybe a quick run-through of "My Little Buttercup" on the piano before wandering off after half an hour. But hey, there are worse evenings you can have for thirty-odd quid.

When we got there, the stage was set up with two sofas, a big screen and a guitar. So unless he just really liked having a choice of places to sit, this meant an interview set-up. And probably for the best: he's not the most enthusiastic raconteur so having someone guide him through it was a sensible choice.

Sensible choices: not a phrase associated with the event's organisation beyond this point. When the lights went down the host for the evening was introduced: broadcaster, author and enthusiastic racially-charged calypso performer Mike Read.

This caused a bit of a frisson throughout the crowd, of whom probably none had ever imagined seeing these two people on the same stage. It was incongruous, unless you followed it to the only two logical conclusions: either a last-minute stand-in, or a desire to do it on the cheap. Of the Q&As I've seen where the crowd was expected to be broader than chin-stroking film types, there have been some excellent hosts, like Edith Bowman, whom I saw expertly shepherd a conversation after Sky Atlantic's Fortitude premiere through the obstacles of a slightly drunk Christopher Eccleston and an uninterested Michael Gambon. You suspect Mike Read comes cheaper than she does.

There's a skill to it: reading the subject, understanding when to sit back and let them riff and when to steer them back to the question. It's about understanding the audience too, and why they've come along. It is safe to say that few members of the crowd had paid upwards of sixty-five notes to see Chevy Chase asked questions about tennis.

In fairness to him, Read was hampered by the sound to begin with. We could hear him perfectly well in the circle, but not Chase, and both of them struggled to hear each other. By the time this was addressed with new microphones, the damage was already done. There was an awkwardness between them: Read didn't so much have lines of questioning as just a list of things interesting to him and him only: did Chase read the same comics as he did when a child? What was it like writing for Mad magazine? (He wrote one article in 1970.) None of this included much about Saturday Night Live, and zero about Community – something which the audience probably would've been interested in.

It unfolded like a real-life Between Two Ferns, a lot of it involving Read outlining scenes to the films then saying: "That was a great scene." Having heard he's not a great interviewee at the best of times, I was expecting Chase to put up a monosyllabic wall, but he stuck at it more gamely than he might have. There was a five-minute series of questions about Paris (where he was heading the next day), and the sinking feeling when Read reached for the guitar you'd presumed was there for Chase to play. 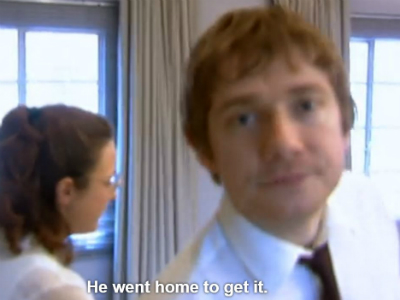 This was the climax of some cajoling to sing "Blue Shadows on the Trail" from Three Amigos, to which Chase had made clear he couldn't remember the words. Read strummed earnestly, Chase mumbled a couple of lines, then told him he'd missed out the chord changes. It petered out awkwardly, like every occasion in history when someone has grabbed the acoustic at a party unrequested.

The occasional shouts of "Aha!" at Read underlined how thoroughly Partridgian the whole thing had become, the best example of which was his question: "Is it hard to maintain being a legend? Because it is for a lot of us." There were boos for a weirdly censorious question about advice for the young people of the UK who were "sadly falling into drugs" ("Yeah: always put your finger in first to taste it") and when the shouts of "You're a twat, Mike Read!" started, there was no going back. Read invited the audience to applaud for Chase, and walked off. Self-awareness not being a common characteristic of former Radio 1 DJs from the eighties, you wondered if on some level he thought it'd gone quite well.

No one outside seemed angry; just wide-eyed and confused. There was a sense of camaraderie even; of something having been shared. Like when you catch someone's eye on the tube after a weirdo's been causing a commotion. Ironically, the author of UKIP Calypso had succeeded in bringing people, for a fleeting, baffling moment, together. And I can't pretend to be disappointed. I feel for the big fans, like the guy in the headdress with the Griswold hockey jersey on, who had a once-in-a-lifetime chance spoiled, but for me, I'd rather see something gloriously terrible than mediocre. Get Mel Brooks over here and get Dave Lee Travis to host it. I'd pay double.

More:  Chevy Chase
Follow us on Twitter @The_Shiznit for more fun features, film reviews and occasional commentary on what the best type of crisps are.
We are using Patreon to cover our hosting fees. So please consider chucking a few digital pennies our way by clicking on this link. Thanks!