Attack Of The Moans: Why Star Wars fans should know better by now

"Well, I know that George Lucas doesn't like it at all—when I was working on The Illustrated Star Wars Universe, he told me that he would be happy if every copy could be tracked down and burned..."

That's Kevin J Anderson, Star Wars author and historian, explaining what we all knew already - that the infamous Star Wars Holiday Special from 1978 which featured a cast reunion on the Wookiee homeworld of Kashykk (including Chewbacca family members called Itchy and Lumpy) was a fucking hideous disaster that George Lucas has hidden like a sexually explicit love letter to a male PE teacher ever since.


The Holiday Special has come up a lot this week, mostly in connection with the the release of a new Star Wars game for Xbox 360. It's called Star Wars Kinect (presumably because Star Wars: Wave Your Cock In Despair was vetoed by the brand guys) and without wanting to sound too dramatic, if the Holiday Special is generally considered non-canon, then this game is like a robot from the future sent through time to brutally fuck the eyes out of the Star Wars universe.

Predictably, Star Wars fans are furious. And maybe they should be. Now written into officially sanctioned lore is the fact that, moments before being frozen in carbonite and delivering the coolest response ever to being told a hot girl loves you, Han Solo sings a modified version of Jason Derulo's 'Flying Solo' with a pair of Imperial officer body-poppers while a Death Star disco ball twinkles in the background. "I'm jumping in my Falcon, Wookiee at my side/I'm Solo, I'm Han Solo" awful smiling not-Harrison Ford autotunes, the blood visibly gushing from the trussed and skinned carcass of whatever Star Wars used to be.

Although we always secretly knew Lando Calrissian could throw a few shapes.


Which is awful, obviously. But at the same time, what are people expecting at this point? George Lucas might have started as a Hollywood outsider, plotting to take on a jurassic studio system with equally bearded young men in the early '70s, but he's long since come full circle from pioneer to ruthless profiteer. What seemed in 1978 like an aberration with the Holiday Special ("Fucking hell, George - Itchy? I mean, fuck") has, with the repeated re-jigs of the the originals, the wave of ubiquitous plastic wank that accompanied the prequels, and this latest cash-in, been revealed as as a sort of default soullessness.

Realistically this is probably the work of LucasFilm rather than Lucas himself. The neckless beardgoblin recently told Seth MacFarlane that he's devolved power inside his media empire to the point that he could "fall asleep for weeks or months or years and nobody notices." And presumably he - along with every other executive in the world - really was asleep when the Star Wars Kinect design documents showing Princess Leia swinging hips to Gwen Stefani's 'Hologram Girl' ("Mmm-mmm, that's my ship, that's my ship") crossed their desks for approval.

"I don't have time to approve this video. It's probably fine."


Regardless of whether this particular bag of shit can be pinned on Lucas personally, the entire world of shit we find ourselves in probably can. Since the first film was released in 1977 the Star Wars series has taken $4 billion in cinemas, and made six times that amount in merchandising. Money being the most important thing in the world, it's fair to say the films have principally operated as adverts for the much more profitable business of making toys - adverts you paid to watch, probably more than once ("Finally they've restored the thing they fucked up in the last set I paid £40 for!")

Pre-Star Wars, licensed products were usually limited to novelisations and skin-tight polyester t-shirts that make everybody look stupid in old photos. But in light of the series' success every major studio established an in-house merchandising unit to maximise ancillary profits. Steven Spielberg admitted to considering tie-in opportunities before production had even began on ET. In 1984 Warner's merchandising division signed agreements with over 50 different companies to make Gremlins-related products.

With these deals off-setting the ever rising costs of production and saturation advertising, it was just a matter of time before financial priorities ended up ass-backwards. Gary Kurtz, who produced Star Wars and The Empire Strikes Back but left Return Of The Jedi because of LucasFilm's increasingly commercial interests, told the LA Times in 2010: "It's natural to make decisions that protect the toy business, but that's not the best thing for making quality films." 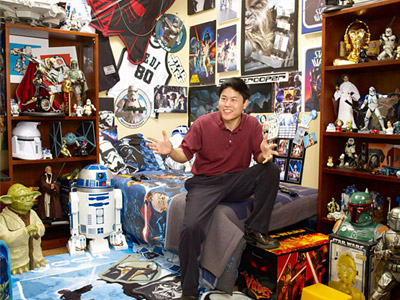 
This article isn't about the evils of blockbuster Hollywood or the perversion of artistic vision. Being a cynic about this stuff is about as brave and useful as offering clouds out for a fight, and besides, when The Phantom Menace came out I drank a swimming pool's worth of Pepsi and sent off for a C3PO head that could talk backwards and made me popular at school. The point is this: if you're looking for answers as to why nothing in Hollywood is sacred anymore - not even Han Solo's roguish charm - it begins and ends with Star Wars.

Skip past Gremlins, Batman, Men In Black and The Matrix and you get to today's Hollywood, where the beast that Lucas unleashed with his army of elbowless bastards has returned and eaten everything. Now we don't just have toys based on blockbusters, we have blockbusters based on toys, thanks to the religiously vacant Transformers series. We bear witness to an industry where board games provide bland grist for the blockbuster mill and even Pixar has turned to making merchandise-driven sequels (consider that Disney has made more from shiny toy cars than all six Star Wars films have made at the box office combined).

In this context fans shouldn't be cross or confused about Boba Fett pelvic thrusting to a YMCA cover called The Empire Today (where you'll be pleased to hear you can hang out with all the droids). Star Wars Kinect is the ultimate, inevitable expression of the new commercial truth of Hollywood that began with little plastic versions of Luke Skywalker: that films are trailers for all the stuff you can sell alongside a movie, whether it's soundtracks, sticker albums, or endless fucking Happy Meals.

By all means be cross with George Lucas for not stepping in to prevent this latest degradation of the long-tortured Star Wars soul. But don't be surprised - he invented this shit.

Also, that's actually him in that costume.
More:  Star Wars
Follow us on Twitter @The_Shiznit for more fun features, film reviews and occasional commentary on what the best type of crisps are.
We are using Patreon to cover our hosting fees. So please consider chucking a few digital pennies our way by clicking on this link. Thanks!