Liked it when Bruce Wayne looked angry three times in the space of three minutes while Superman didn’t say a single word? Cheered when The Joker smiled at the camera and er… that’s it? Then look out, fanboys and fangirls, because this time we have hit the Comic Con motherload.


Crowds were queuing round the block to get into the Hall H panel for Suffragette, and they weren’t disappointed. Of course Meryl Streep turned up as she does every year, this time dressed as Nien Nunb, while Carey Mulligan joined her on stage dressed as a very convincing Ecco The Dolphin. 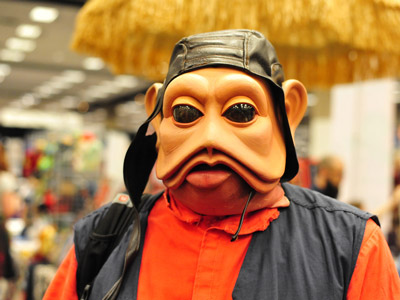 Meryl Streep walking the Con. It is expected that she will be Oscar-nominated for this.


The real draw for those in attendance though were director Sarah Gavron and writer Abi Morgan, who appeared from the wings to rapturous applause and whoops of delight from the excited geek-heavy crowd, which included Hugh Jackman and Ryan Reynolds, both wearing self-made Suffragette t-shirts.

After some initial fan-baiting, and discussion around the filming process, it’s fair to say that the panel were staying tight-lipped about plot details. But then Gavron dropped the bombshell… and unveiled the film poster.

Bearing in mind that, with the film still two months away from release, this was still a rough version of what presumably will be an updated official release coming soon. Here’s a recap of what we saw, anyway:


Carey Mulligan takes centre-alignment in an image that makes her seem seven feet tall. She stands against a background of bright purple, white and green sections while still wearing the traditionally drab and dull clothing of the early 1900s.

Text is overlaid saying "THE TIME IS NOW", each word on its own line with 'TIME' and 'NOW' sitting at a larger font to express the powerful urgency of the message. The text is written in a similar, slightly lighter purple to that in the background.

Beneath that, we see the Suffragette logo and release date, details which – I’m sure you’ll remember – were released at last year’s Con.
Needless to say, the crowd went nuts for it. It’s early days yet, but on the strength of this poster alone we could be looking at the most awesome depiction of Emmeline Pankhurst yet, and a version that will finally please fans after the debacle of Val Kilmer’s portrayal in 1997’s Stuff Yer Jet.

Update: A photo has now leaked online showing the poster being unveiled. See it below: 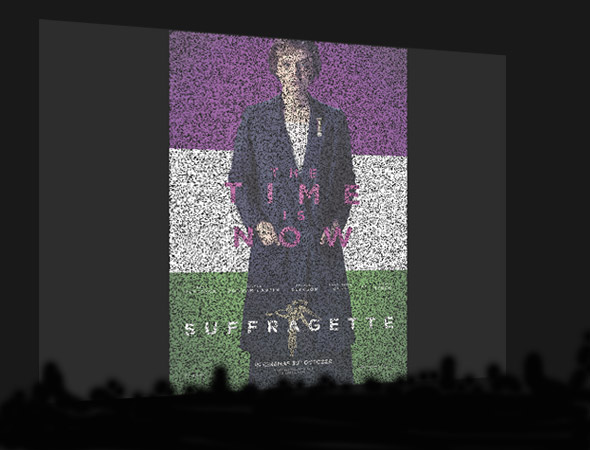 With any luck, this will force the studio to release a full, official, high-res version of the poster any day now.

More:  Suffragette  Comic Con
Follow us on Twitter @The_Shiznit for more fun features, film reviews and occasional commentary on what the best type of crisps are.
We are using Patreon to cover our hosting fees. So please consider chucking a few digital pennies our way by clicking on this link. Thanks!