We did a quick look round the internet the other day and realised that practically no one is writing anything about Breaking Bad. Way to drop the ball, other websites: it's a pretty big deal, you know! Lucky you've got us around to discuss the face off it. (Spoilers all over the place, obviously.)

Ed: I have no thoughts or theories whatsoever on how it should end, and I have no interest in hearing anyone else's. I'd hate to end up correctly second-guessing it.

But we can't really have this discussion without touching on it at least. I don't know about the ultimate ending, but I do feel strongly that Walter Jr must die along the way. Not that I dislike the character or actor; I just think it's the ideal way that Walt could be punished for his crimes. If indeed we think he should be. There's a lot of me still likes the guy and wants him to get away with it.

So who's he coming back from New Hampshire to kill with his massive gun? The White Power guys? Jesse and Todd, who have taken over the meth empire in the interim six months?

Matt: I bet he's going after all of the above. There's no way he would give up the $70-odd million dollars, so he'll try to get that back, or get even. And he is STILL super-pissed at Jesse (couldn't believe that last-second confession about watching his girlfriend die - I had all but given up that it was ever going to be revealed) so there's obviously some payback to be had there.

Ed: I think there's more to the Jesse thing than his being pissed off and wanting him dead. Ordering his death in the first place was a reluctant move; he genuinely does care about him. 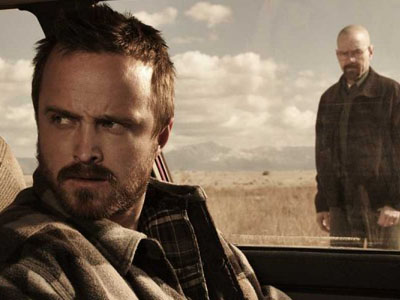 Ali: I think he genuinely wants Jesse dead. Ever since Walt found out Jesse sold him out to the DEA all hope of reconciliation has died. It's the one thing he never thought Jesse capable of - it was an all or nothing gamble for him to team up with Hank and it failed. You just wonder if Walt still has that desire to destroy Jesse one year later. Is the ricin cigarette for him? Uncle Jack smokes like a trooper. Just saying.

End game theory: Walt tracks down Uncle Jack and the Nazis and kills them all for fucking him over. He frees Jesse but kills him for betraying him to the DEA. Then he kills himself. Fade to black.

Luke: I sort of feel that at least one character should have the closest thing to a happy ending possible. Would they really end the show with everyone on a down note? This will be Vince Gilligan's legacy.

At first I thought it would be Hank, but obvs that can't happen now. Brilliant and chilling how they just totally removed him like *that*. I think Walt is too far gone for any sort of redemption, no matter what he does to try and put things right. That's been his whole thing - "I can fix this if everyone does exactly what I say" - but it's waaaay beyond the point of no return now.

Ed: It totally has to end on a down note. Unless it's Saul running his Cinnabon in Omaha and discovering he quite likes it.

Looks to me like the obvious ending they're careening towards is Walt and Jesse joining forces one last time to kill Uncle Jack, Todd and the rest. But there's no way it'll be that simple, of course. Funny how they've switched the two characters completely: Jesse was the bad kid and Walt the ingenue. Now, despite the fact he's done some terrible things - killing Gale probably the worst - they're setting Jesse up for your sympathy and you want him to have a happy ending somehow.

Other suggestion: Walt's come back to get the ricin vial back again so he can finish off Brock because he looked at him funny while he was eating his Frootloops, the little bastard.

Ed: Do you want Walt to get away with it or "win" somehow? Do you like Walt?

Luke: No, Walt is evil. Not even an anti-hero - everything he did from the first episode onwards was at the expense of someone else. No sympathy. Everyone is his victim, no matter how many times he does that gummy crying act.

Ali: Only insomuch as it's an absolute joy to watch him execute his plans; to watch an intelligent, intelligently written, character utilise his brainpower no matter his morals.

I think it's reductive to want him to win or lose or redeem himself because those are not options on this show. Every action has shades of grey; every character has multiple faces. That's why it's so brilliant and that's why it's so enjoyable watching Walt do whatever he does, whether it's good, bad or somewhere in between.

I just ... like him. I never really stopped liking him. I find his ability to think his way around problems incredibly satisfying to watch and I love it when he succeeds. I should care more about the people he's wronged, but I don't really think that way about characters in general. The only one I feel strongly about is Marie, whose prying and passive aggression was always infuriating, to the extent that even when she deserved your sympathy, like when her husband had just died, I still felt like she was being overly dramatic about it. Testament to how good Betsy Brandt is.

Matt: I agree with Ali: I don't really see the show being about comeuppance or redemption or anything like that. The show has always predominantly focused on realism so I'm not really rooting for Walt to win or lose one way or the other. I feel like I'm just waiting to find out how his story ends. It's probably the first time ever that I haven't got my own ideas about how I want a programme to end; I just want it to show me.

I guess, if I had to choose, I'd want Walt to get away with it just because this is the kind of show that should eschew the usual 'crime doesn't pay' moral stance, but it really isn't about that, is it?
More over the page, after we've actually watched the bloody thing.
More:  Breaking Bad  Bryan Cranston  Aaron Paul  AMC  Netflix
Follow us on Twitter @The_Shiznit for more fun features, film reviews and occasional commentary on what the best type of crisps are.
We are using Patreon to cover our hosting fees. So please consider chucking a few digital pennies our way by clicking on this link. Thanks!
Next Page »