Brosnan's Holiday: How Pierce likes to mix business with leisure

Though I'm duty bound to pay him the amount of respect any ex-Bond is due, prepare yourselves for a theory that will change the way you look about Pierce Brosnan and the movies he makes. Sneak preview: it almost feels like he's not acting entirely for the love of the art-form.


It's impossible not to like Pierce Brosnan: he's got 007 credentials (good ones, not like the Welsh or Australian guys), a sob-story that would get him to at least the semi-finals of The X Factor and a cheeky Celtic smile that could liquefy a housewife's panty at ten paces. However, it has come to my attention that Pierce Brosnan is motivated by something other than my respect. It all started when this tweet popped up on my timeline.

Saw The Love Punch yesterday. Awful. Is Brosnan's only criteria for accepting a script these days whether it involves a sunny Euro jaunt?

Cue a 'final scene of The Usual Suspects' style shot of me dropping my tea in slow-motion. My God. El_Duderino81 is exactly right. Brosnan, as hard as he works and as good as he is, almost certainly accepts movie roles based on whether or not he gets a good holiday out of the deal. We're through the gun barrel looking glass, folks, and James Bond is at the end of it, flicking through a Thomas Cook catalogue.

If you don't believe me, consider his recent body of work. Bond movies don't count because he's supposed to trot the globe, but it looks like our friend Pierce got a taste for travel and doesn't have the air miles or the licence to kill to do it in his own time.

(Of course, Brosnan made lots of movies in between these that didn't feature expensive holidays abroad, but I left those out because they didn't fit my argument. What? I'm not the one stealing all the holidays.)
The Love Punch (2014)
Filmed in: The Cote d'Azur

Geriatric romcom The Love Punch is currently riding high with 25% over at Rotten Tomatoes, so we're guessing that Mr Brosnan did not sign on the dotted line because of the scintillating script or the chance to work with Timothy Spall. But a film set on the French Riviera? Pierce heartily endorses this event or product.
A Long Way Down (2014)
Features a holiday to: Tenerife

This adaptation of the Nick Hornby novel isn't set in sunny climes, it's set in London and is about a four suicidal people who agree to put their plans to kill themselves on hold while they become friends and learn important life lessons. One way they get their minds off harmful thoughts is by going on holiday to Tenerife, which coincidentally is the bit in the script that really moved Brosnan. TO A SUNNY BEACH.
Love Is All You Need (2012)
Filmed in: Southern Italy

Brosnan plays a grieving widower in this romantic drama from Susanne Bier, and just happens to be the dream man for a cancer sufferer who has discovered that her husband is cheating on her. It doesn't do any harm that he leaves in a seaside villa on the Amalfi coast and enjoys a view that looks like it was torn off the label of a jar of Bolognese sauce. I would romance Pierce Brosnan if it meant getting drilled by him in southern Italy.
Percy Jackson & The Lightning Thief (2010)
Set in: Greece

"It's set in Greece, you say? Sure, I'll play a Centaur. I'll play the arse-end of a horse. I'll play anything you bloody well want." It's important to point out that though Percy Jackson & The Lightning Thief was set in Ancient Greece, it was actually filmed in Ontario, Canada. However, I'm assuming Pierce had already signed the contract before he realised.
Mamma Mia! (2008)
Filmed in: Greece (again)

Consider this: Pierce Brosnan accepted a role in this adaptation of the popular ABBA stage music despite the plainly obvious fact that he can't bloody sing. "It's a great chance for me to act opposite the great Meryl Streep," Brosnan lied, as he filled his basket with suntan lotion and rubber johnnies at the Boots in the airport.
The Matador (2005)
Filmed in: Mexico City

Everyone banged on about how The Matador was Brosnan "killing off" Bond by playing a boozy, out-of-shape contract killer in the 007 vein. I'll wager that Pierce got to the scene that read

PIERCE lies by the hotel swimming pool in his Speedos

and got his agent on the phone to tell him he was free before he even realised it wasn't a Bond film.
After The Sunset (2004)
Filmed in: The bloody Bahamas 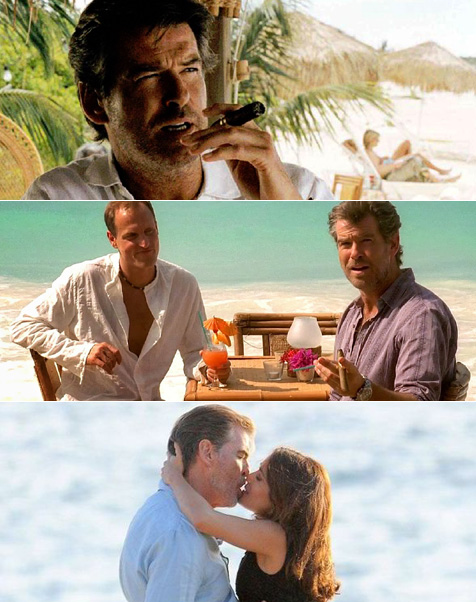 More:  Pierce Brosnan  The Love Punch  Freebies  Mamma Mia
Follow us on Twitter @The_Shiznit for more fun features, film reviews and occasional commentary on what the best type of crisps are.
We are using Patreon to cover our hosting fees. So please consider chucking a few digital pennies our way by clicking on this link. Thanks!