Catching up with The World's End aka more crazy guesswork

Because there's no such thing as half an obsession, right? (*hisses like cat, scurries away from Simon Pegg's bins on all fours*)


Back in July last year I very nearly lost my mind over-analysing a teaser poster for Edgar Wright and Simon Pegg's The World's End. Summary: Arthurian legends, mythical creatures, Charles the First, yadda yadda yadda. Six months later, and the boys have done a good job of keeping details under wraps - letting slip the cast (but not the characters, more on that below), a brief synopsis, another not-very-revealing poster, and one official image. 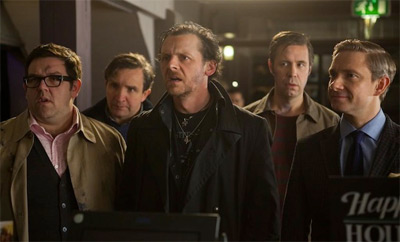 This one. Hi Tims.

But now, thanks to Empire Online, an interview with Simon Pegg has surfaced - for a luxury tweed jacket company of all places - which has sent my Speculation-Sense into a tingle overdrive. Specifically this choice quote:

"
"
Thematically, it will all make sense when the three films can be viewed consecutively. This sounds lofty but they form a dialectic sequence, which I hope film students will write essays about. Shaun of the Dead = evolution, Hot Fuzz = devolution, World's End = revolution.
If Pegg is hinting at an actual historical revolution, then that sits neatly with my suggestion of something connected to Charles I and The English Civil War. King Arthur was a social revolution, of sorts, so I'm not totally dismissing that either yet. With names like King and Knight, it's not a huge leap to imagine we'll be seeing events unfold which tap into the mythology running deep alongside the colourful history of the British Isles.

Speculation aside; withholding the names of the characters can only mean they're incredibly important to the plot somehow. Eventually the IMDB page will update, or a trailer will be released - or maybe even the film will come out in August as planned - and then we'll have to find out. Are Wright and co. worried too much information will ruin the film? Perhaps, otherwise why not just tell us now?

Obviously I don't want to ruin the film - for others or myself, I can't wait to have a cornetto trilogy that doesn't involve getting ice cream stains on my carpet - but this sort of build-up is designed to make us play guessing games. I'm sticking to my guns on the whole mythology/history thing. In fact I'd put money on the remaining characters having names like 'Bishop' or 'Cromwell'.

And then you'll see.

More:  The Worlds End  Edgar Wright  Simon Pegg
Follow us on Twitter @The_Shiznit for more fun features, film reviews and occasional commentary on what the best type of crisps are.
We are using Patreon to cover our hosting fees. So please consider chucking a few digital pennies our way by clicking on this link. Thanks!