This week it's another Catfish curveball: Nev and Max did their Googling on behalf of an actual rapper. This is like finding out something you couldn't believe was true was indeed true after all. I can't help but feel I should be working harder on these openings.

I could go all deep into the laws of logic and contraposition, but in short let's be clear on one thing: if anyone on the internet claims to be a model or rapper, then they are not a model or rapper. Models and rappers have their own version of the internet where they can communicate with each other, I just haven't thought of a funny name for it yet.

However, the bait this week was R Prophet, who was an actual, real-life rapper, formerly of the band Nappy Roots. For someone who called himself Prophet, his message from the divine seemed to be asking big-bottomed girls to "put that booty on me". Prophet, or Ryan, told Nev and Max that he was "new to the internet", but had been told by his management he had to "go and get the twitters" to widen his fan base. Bless.

Being so new to the world wide web meant that he wasn't immediately suspicious that the incredibly beautiful woman he was talking to might not be the person in her photos. Prophet revealed that even after performing for 50,000 people he would still feel alone and felt more at ease conversing with a stranger than someone who had any preconceived notions of him. This is the stuff One Direction fan fiction is built upon.

He and "Trinity" had an immediate connection (funny how you can always "connect" instantly with extremely attractive people, isn't it?) but had never met in person despite living relatively close. Trinity had helped Prophet through some bad times but now he'd reached the point that he wanted to take their relationship to another level. For once, it wasn't the catfish making the excuses as to why they couldn't videochat, because he wasn't sure how to work the magic book his management had given him. 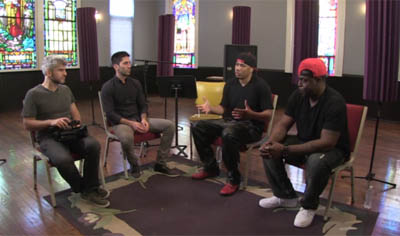 "I just started pressing the buttons, and the corresponding letters started appearing on the screen, yo! I was like, DAMN."
The hook

After meeting Prophet at the studio (and following excruciating scenes where Nev rhymed "Snapchat" with "slap that"), he and Max started with Trinity's Facebook page. Max seemed to think that 1602 friends was a normal amount – am I doing Facebook wrong? – but Nev mooted that perhaps Trinity was real and thought that she was the one being catfished. That would have been good, wouldn't it?

However, all of Trinity's pictures were selfies; there was no one else tagged in them and they were all incredibly flattering, which Max noted was "guy bait". A cheeky Google image search showed the pictures were of a model called Jasmine Sanders with more than a million Instagram followers, who was also Chris Brown's ex-girlfriend. They sent her a video message to get in contact, and got on with the business of finding out who Prophet was talking to.

A very quick search showed Trinity's phone number was registered to someone called Crystal who lived 15 minutes from Prophet, but unfortunately Crystal appeared to be an incredibly popular name in that part of the US as Facebook threw up hundreds of profiles with the same name. She wasn't the girl in the photos, but cue a heavily pregnant pause when Max reiterated the fact that they still had a supportive relationship and that this Crystal could be someone that Prophet could still be interested in. Yeah right, Max. AS IF.

The aforementioned model Jasmine Sanders got in contact; she had no idea who Crystal was, but it wasn't really a surprise to her that someone had been stealing her photos. She had never crossed paths with Prophet either, but felt sad that he was being catfished. This would never have happened on that models/rappers internet I was on about earlier that I'm totally going to invent.

At the presentation of findings, Prophet appeared completely perplexed that someone would go to that amount of effort to pretend to be someone else. At this point, Nev and Max should have taken him aside and gently broken the news that not only was he not talking to a model, but he also probably hadn't won the South African lottery. As he moped that he'd wasted a lot of time talking to fake Trinity, Max reminded him that he was having a relationship with someone – just not Jasmine. And that he should be lucky that at least Crystal was a woman and not a fat dude living in his parent's basement.

At first, Prophet was reluctant to meet her, but Nev gently cajoled him into at least seeing who he had claimed to have such a deep and meaningful connection with.

Nev contacts Crystal/Trinity, who agrees to meet them in a local park. When will people realise that nothing good ever happens in parks? Prophet finally comes to the realisation that "You can be anybody on the internet" as Crystal arrives. Welcome to 2015, son. For she is the complete opposite of the girl in the photos. 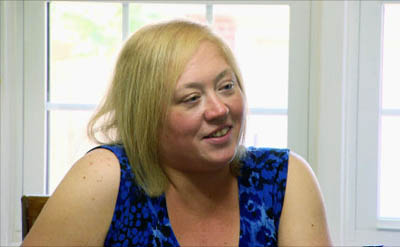 I don't think I need to elaborate further.


Prophet is extremely disappointed and hints that his and "Trinity's" relationship may have been a tad more intimate than he had previously let on. Crystal is somewhat nervous and possibly a little upset, and oddly refers to herself in the third person, saying "That's all confidential with Crystal", pointing to herself in case Prophet was still under the impression that someone equally gorgeous as Jasmine might still appear and this was all an elaborate ruse.

Before things get even more awkward, Nev moves on to why Crystal started the Trinity profile in the first place, and it turns out it was nothing to do with Prophet at all; she was checking on her ex-boyfriend, whom she suspected was cheating on her. Somehow it then became a relationship with Prophet, and she could never find it in herself to reveal she wasn't who she said she was because he seemed to benefit from the motivation for his career and personal life.

Addressing the elephant in the room, Max enquires as to whether Crystal had any romantic feelings for Prophet; she did, but a quick glance at Prophet's twitching face shows it's a lost cause. To ram the point further, Prophet exclaims, "This is probably the most embarrassed I've ever been in my life." Ouch.

Spitting out the type of rhymes that no doubt made Prophet the famous rapper that he is, he continues, "Everything I've ever said to you has been honest. You know, honest feelings, honest thoughts, honest intentions." Oh, really, R. Prophet? If that is your real name? Despite saying that everything she said was true, it just didn't come from the face he thought it came from, Prophet won't be moved. "You violated my trust," he adds.

There are no hugs.

The next day, Nev heads out to meet with Crystal alone, who seems to have always known Prophet would never have been happy after finding out who she was. Nev presses her as to why she never came clean, she felt that she needed to keep up the pretence because she felt he needed someone to talk to. She says she'd like to apologise to Prophet, who agrees and Max drives him over. She says sorry, but Max isn't having any of it, saying it's not a magic pill that will make everything better. She agrees that she needs to work hard to regain his trust, but his silence speaks volumes; Crystal knows this is all redundant and that neither of them is into it.

There is then a hug.

Big news – since filming has ended, Prophet learned a bit more about the internet and now has Skype, and is hoping to meet a Nigerian princess who had randomly contacted him about holding some money for her.

Surprisingly, Prophet and Crystal stayed in contact and she's been helping him with "things". Crystal feels as though she's in a better place now and oh, what a coincidence, Prophet's single is about to drop! I hope it contains that "honest feelings" line, but will probably be about big-bummed girls. Speaking of which, if anyone wants in on the rapper and model internet, hit me up on the twitters.