It's been a hard week for love: Gwen, Gavin, Zayn, Perrie, Miss Piggy and Kermit all took a one-way trip to Splitsville. Could this week's Catfish be the love story we've been waiting for? No, because love is dead, people are shit and everyone and everything is shit.

Thaddeus met Sara Jackson online after reaching out to strangers to talk to about his personal life. Thad was having problems in his marriage and considering leaving his wife and child; he believed an outsider who knew nothing about him would help him gain some perspective. Thad claimed he randomly added a bunch of people on Facebook through the 'people you may know' section as an interesting way to make new friends. "Hi random person! Would you like to chat about how I've become dissatisfied with my wife? What about that local sports team, huh?" Whether these randoms were also actually people he'd quite like to bone was not specified but highly implied.

For all the good it did him, Thad may as well have sought counsel from 66668 Bongo. Sara was the only one to reply, because duh, she was a catfish and not a regular person who would be willing to immediately share deep secrets with a person to whom their only connection was that they used to go to school with their hairdresser. As Sara helped Thad try and justify cheating on his wife (probably), surprise surprise, they developed feelings for each other.

Thad moved out of the family home, but then Sara started with the stock excuses as to why they couldn't meet and came out with probably the best in all of Catfish history; the first was because she had a seizure, the next time was because her crazy ex kidnapped her. So far, so Mad Markie, but she was actually on the phone to Thad when it happened, and he heard breaking glass and police radios in the background before the line went dead.

A frantic Thad contacted the police in her area, who had had no reports of a kidnapping, but he eventually received a text from Sara's mum, who simply told him she had "escaped" and was now in bed, poor lass.

It wasn't until this point that Thad became suspicious, and decided to do some sleuthing of his own. He discovered that Sara was actually a woman named Ashley, and that the girl on the photos was a girl called Sara Marie, who told him Ashley had been catfishing for years with her photos and had done it to plenty of other people.

It was finally time for Thad to take a moral stand, because obviously there was no way he was going to get laid now. He contacted Nev and Max, believing what had happened was "punishment" for his sins. "I hope by confronting Ashley, something good will come out of this and it will all stop," he tells them. "And maybe if I get to meet the real Sara and show her what a good guy I am, I can shag her!" I add in my mind. 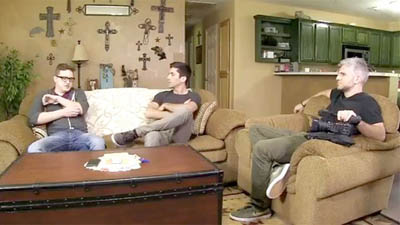 I'm still none the wiser as to whether the hopefuls in Catfish doing their own investigations are a good thing or bad thing. Nev and Max ask Thad to write down what he found on Ashley, email it over and oh, could you pick up our dry cleaning too.

Realising that they could soon be out of a job, Nev and Max contact Sara Marie, the girl from the photos, and the other guys Ashley had been talking to as "Sara Jackson". To prove they still have sleuthing skills, they also Google Ashley, who has a couple of criminal records and is apparently, 6'1". Nev cannot hide his glee at potentially landing a whale and makes jokes about her crushing him. Come on, Nev, I thought we were past all this now?

A former victim of Ashley's gets in contact, and tells them a similar tale of meeting online, and their relationship becoming romantic before she started conveniently having seizures before they would meet up and getting kidnapped by her ex. This guy immediately called her out on it, and she admitted she made up the whole thing "because she had no life of her own". Hey, I have no life but you don't see me trashing people on the internet! Oh, hang on...

The real Sara Skypes with Nev and Max, and she constantly repeats that she doesn't feel that Ashley sees her as a real person anymore after she asked her to stop stealing her photos. Much like Thad, there's the sense that they are both using this tale of catfishing to their own end to write their own story. Sara seems slightly pleased that someone stole her photos and judging by her preening on screen can't wait to have some more camera time. She agrees to meet the group in Texas so they can drive to Ashley's house and confront her.

They all meet the next day to share their findings. Sara Marie tells them how someone called Sam contacted her back in 2010 saying they'd been talking to someone using her photos. In order to determine Sara Marie was not another fake profile, she sent a photo of herself holding up a sheet of paper with her Twitter name on. Sam and Sara Marie swapped numbers, then three years later another guy called Joe contacted her with a similar story. As they exchanged messages, she asked for the other Sara's number – who turned out to already be on her phone as Sam. Ashley had manipulated the picture Sara had sent her to make her fake profile of Sara Jackson seem authentic. That is one sneaky catfish. Brava, Ashley.

Again, Sara Marie seems barely able to contain her own glee that loads of blokes around the country think that they're in a relationship with her. Thad offers the opinion that Ashley probably thinks she is Sara now. Sara tries to look as though she's sadly nodding in agreement, but the shit-eating grin she's trying to suppress shows she's secretly loving it.

Nev calls Ashley, who doesn't answer. A bit too quickly, Thad proposes they just go and confront her, which Max agrees to before Ashley can probably even check her messages. Never mind that this could be a volatile situation they're walking into, it's time for a road trip! 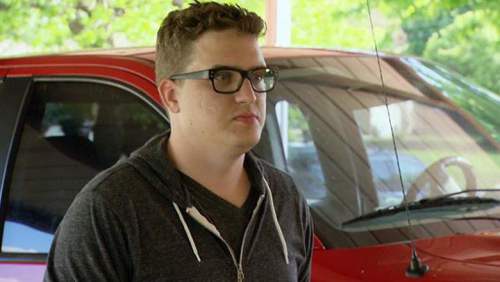 When Nev et al rock up at Ashley's, there's no one home. Talking to the neighbours only establishes that sometimes Ashley likes to have arguments outside of her house. They head back to their hotel, and for some strange reason Thad begins filming himself to recount the day's events. There's a strong sense he believes this episode to be starring him, rather than about him, and this is his chance to audition should Max ever make another movie.

Ashley texts Thad and agrees to meet the Catfish crew the next day at her friend's house. Ashley walks out onto the front lawn and we're all left trying to figure out if she is over six foot as she stands next to Nev. With the awkward pleasantries out of the way, Thad steams in with "Do you have any remorse whatsoever?!" Um, last I heard Thad, YOU were the one who contacted her because you wanted to ditch your wife and needed someone to tell you it was a good idea, you self-righteous dickweed. You can't even cheat on someone properly! Ashley admits she told a lot of lies, and it's not surprising she has her own sob story to tell. She was due to get married when her fiancé suddenly dumped her two days before her wedding, telling her he had knocked up someone else and was marrying her instead.

Thad and Sara continue to express their anger that Ashley doesn't appear to be showing enough remorse, although she does agree they have every right to be pissed off. Sara tells her she should have known any fake relationship she started was going to end in disaster, but fails to see Ashley is agreeing with her that it all has to stop. Thad and Sara seem to be so up themselves, it's hard not to feel on the side of the catfish. At least we find out that the noises Thad heard as Ashley was being "kidnapped" were from YouTube. Again, brava to that woman.

A short while later, Ashley gets her chance to tell everyone how sorry she is and elaborates on her story, saying her weight issues meant she felt she wanted to be someone else all her life. As she gets more and more upset, saying how lonely she feels, Sara starts to get emotional too. Give me a break. Max takes her to one side to ask why she's crying too, and Sara tries to display some self-awareness that she doesn't want to make this about her, but it just comes across as look-at-me/don't-look-at-me, attention-seeking behaviour. She says she understands where Ashley is coming from, which Max suggests telling her she feels the same way may help Ashley through this.

Wiping away her tears, Sara states she also has issues with her weight, but doesn't want to tell Ashley because "she's probably looking at me thinking, what do YOU have to worry about?" 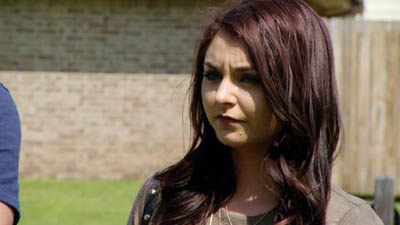 GIVE ME A BREAK.


Ashley apologises some more, Sara refuses to show any empathy toward her and Thad continues to try and convince everyone he's actually a nice guy by saying he "see's the good in everyone" – yeah, particularly if they help you have a bit on the side, eh? Ashley promises she is done with the fake profiles.

Except, she isn't. Both Thad and Sara tell Nev and Max in their catch-up that they've both heard she's at it again. Everything's going hunky-dory for Thad, and his wonderfully understanding wife has taken him back and they're stronger than ever. God, she's lucky to have him. His parting shot is that he thinks Ashley is a "sadistic, manipulative, evil person". You know, like the type of person who scouts Facebook for extra-marital poon.

Sara has had someone else come to her thinking that they're engaged – again her self-satisfied smirk fills the screen. However, now Ashley is telling people SHE is the real Sara, and that Sara Marie is the one impersonating her. GOOD. I'm actually a bit glad Ashley's keeping her end up and getting engaged to random people. Love is dead.