Apologies for the lack of recaps recently. I took the One Direction news a lot harder than I expected. And just like their impending "break", this episode of Catfish left me with more questions than answers.

Andria met David on Bebo 10 years ago when she was just 12, and had "been" with him ever since, much in the same way that I am "with" Henry Cavill; it's just a small problem of never actually having met.

In what is becoming increasingly common and annoying on Catfish of late, there had already been an unveiling of sorts. However, like someone who refuses to believe Zayn's departure was the first nail in the 1D coffin, Andria had a hard time accepting the evidence in front of her, even though it was RIGHT THERE. After getting fed up with David's reluctance to meet, Andria threatened to put him on Catfish, and the gig was up: David responded with a text saying, "I'm Geo, I'm a woman, I'm sorry that I hurt you" together with a picture of a woman.

Going through Andria's pictures, Nev found a snapshot she'd been sent of the same woman's driving licence, together with her full name and address, which Andria said was the same address the letters David had sent her came from. Yet still, Andria couldn't bring herself to believe she hadn't been talking to David all this time: after all, he had touchingly sent her an outline drawing of his penis. What more proof would you need, other than actual, legal proof of identity?

Andria also had a voicemail "David" had sent her, but Max was still suspicious. 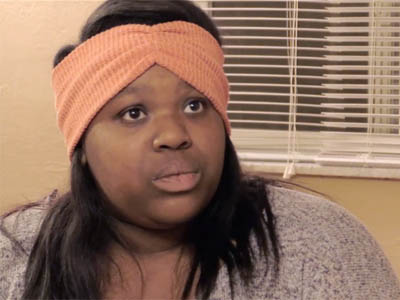 "Glad you asked. It's a half-turban. There are those who call it a hurban."
The hook

It took literally no time at all for Nev and Max to tear Andria's make-believe world decorated with paper peens apart. The phone number wasn't registered to anyone called David, and David's email geostain@ImsoobviouslyaCatfish.com contained the word "Geo" – the name of the woman "he" said he actually was. A few clicks later and Nev and Max were on the social media page associated with the email address, with, would you believe it, pictures of the same woman – real name Christina – that "David" had sent Andria when he was coming clean.

On their way to present their (minimal) findings to Andria, Max noted: "It's like finding the person you were married to for 10 years is not the person you thought they were." Yes, Max – it's exactly like that isn't. You're just lucky you're so pretty.

Understandably but also somewhat incredibly, Andria was devastated by the news WHICH SHE KNEW ALL ALONG. Her friend Camille, who met Andria around the same time she met David, comforted her after the "devastating" news. If you're thinking what I'm thinking and that they should have demanded to see Camille's internet history right there and then, it wasn't her. Camille had spoken to David on the phone in front of Andria and had tried to convince him to meet her.

Camille was a bit of an enabler, also refusing to acknowledge that David was a woman because of the slightly husky voice at the end of the line. However, Camille did want Andria to move on, but for the whole of their friendship had never once told her to get a grip and forget this ridiculous fantasy. You're a terrible friend, Camille.

It was time for the terrible charade to end. Nev phoned a cagey David/Geo/Christina who still didn't want to meet, but since they already had her address they could go and ambush her anyway and get Andria some answers/a hefty reality check.
The catch

There was a definite lack of tension as the gang rolled up to Geo/Christina's house; we already knew who was going to open the door. Sure enough, the woman in all of the photos appeared and told Andria she had started the profile as a bet and that she didn't have any underlying feelings for her, despite the fact they'd been talking intimately for 10 years. By her own admission, Geo/Christina didn't have many friends, she had "associates"; how very Ron Swanson.

After listening to Geo/Christina's assessment of her lack of feelings, Max announced that he wasn't buying it. "I saw the letter you wrote. It was written with passion. You can't fake that" Where have you been for the last four seasons, Max? (Apart from gallivanting with Zac Efon.) Have you forgotten which show you're on? Have you also forgotten she'd also drawn an outline of a penis, when she is clearly lacking one? Come to think of it, what did she draw around to get the desired effect?

After being part of a relationship for 10 years, Andria equally felt that Christina's passiveness was "all full of shit", which provoked Christina to drop her own truth bomb: that Andria had sent pictures of someone else in the early stages of their relationship. 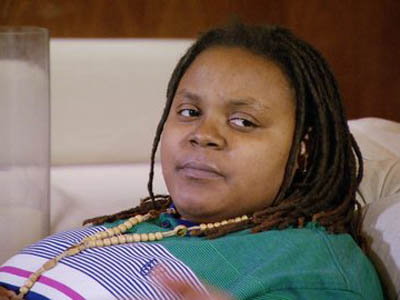 
Andria refuted it, but Christina was adamant and they reached stalemate.

Back at Andria's hotel, Nev attempts to arrange a post-confrontation confrontation with Christina, where everybody gets to sit on an overstuffed couch and talk about their feelings. Reluctantly Christina agrees, but only if Andria "comes back down to reality" and admits she lied too, and if she doesn't, Christina won't come fully clean.

It's time to pull Andria up on the sticky issue of her also using fake pictures to begin with. "Is any of that true?" asks Nev. Andria comes out with a convoluted "yeah, but no" answer of creating a fake profile but with her name and details to befriend David on MySpace, because he hadn't accepted a request from her real account. "So why did you do that?" asks a producer offscreen. An ashen Andria looks at the floor and mumbles, "I don't know" and Max is all "Fuck this shit".

Neither Nev nor Max can pin Andria down as to when she created the MySpace profile and how long she kept it up for, or when she admitted she wasn't the girl in her photos. "We're completely confused by this," admits Nev, "But it doesn't really matter." OH DOESN'T IT? Why can Andria get off relatively scot-free but Christina is pulled through the ringer? Christina readily admitted she had been lying as soon as her identity was questioned. When did you stop caring, Nev? Was it when Max decided he actually had to make a film in order to be your "filmmaking buddy"?

Before their next meeting, Nev tells Andria she has to start to realise the part she played in all of this too by putting up with "David's" excuses for too long. Short of smacking her repeatedly in the face with Christina's driving licence, gas bill and Caffé Nero loyalty card from the damning dossier of evidence, it sadly looks like nothing's going to get through to Andria. Which then begs another question – why did we not find out who the guy in the photos was, and how Christina basically stalked him for 10 years to keep supplying Andria with pictures?

Many more unanswered and unasked questions hang in the air. Why does Christina have no close friendships? How long was Andria also pretending to be someone else and when did she stop? And then why did Christina continue to prolong the relationship for so long, only to pull the plug at the first sign of trouble when she had a get-out clause early on? We shall never know, because no one bothers to ask.

Christina and Max bicker as she tries to point out gaps in his argument that she's continuing to lie even now about her feelings until even Andria can't take it any more and I pray for the sweet release of death. Lord, give me some answers.

Apparently Christina does have a heart after all, as Andria shows Max a long text she'd sent her saying how sorry she was, so does she still have feeilngs for her? Andria says she's been getting similar texts every day, but she had told Christina she wasn't comfortable returning to the relationship they'd had when Christina was "David".

Except that's not what Christina says, who claims that the pair haven't been in contact since filming ended. But who to believe? Nev and Max are too tired to answer. As with One Direction, this is surely the beginning of the end.