Great questions of our time: if a tree falls in a forest with no one to see it, does it still make a sound? What is the sound of one hand clapping? Can you be stalked by someone you've never met? At least one of these will be answered in this week's Catfish.

Ayissha claimed that she and her online love Sydney had "the kind of love you see in the movies". A kind of love where you didn't videochat or even have to meet in person, which I can totally get on board with. Eventually, this wasn't enough for Ayissha, but despite Sydney moving from Texas to LA, nearer to Ayissha, she still refused to meet up.

This put their relationship under some considerable strain, but Aiyssha was still determined to continue. Even after she flunked out of school trying to find Sydney after she'd told her she wanted Ayissha to be with her whilst she was in hospital, but neglected to tell her which one. 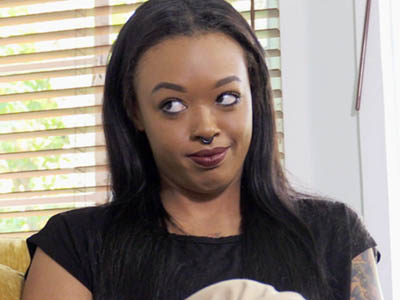 Girrrrl, she's just not that into you.


However, after the two had broken up, Sydney appeared to be keeping tabs on Ayissha and know about stuff she had been up to, sending her vaguely threatening texts and getting her twin brother and other friends involved.

Then came the killer twist: out of the blue, Sydney sent Ayissha a photo of another girl, and told her that her name was actually Whitney. Under her own gumption, Ayissha discovered that the girl in the photo wasn't actually called Whitney. You think this would be enough for her to finally give up on the whole thing, but she was still determined to meet the girl she'd fallen in love with. Max and Nev however, just looked like they wanted to go back to bed and forget they'd even heard of Catfish.

Nev and Max perused Whitney's (formerly Sydney's) Facebook profile, and contacted her friends who had also spoken to Ayissha, ie the ones who had given her shit after they'd split up. Two of them responded, both unaware that they were even friends with Whitney (Whidney?) in the first place and had no idea who she was.

A quick search of her phone number revealed Whidney's (I'm sticking with it) address, and the investigation was almost over until one of the Facebook friends, Markeith, replied to Nev with a message almost identical to the other two Nev had received. Could it be that Whidney had created a bunch of other fake profiles to make Whidney's seem legitimate?

It would appear so, as Ayissha texted Nev and Max to say Whidney was onto them and knew they were investigating her. Whidney was able to put a lot of effort into building fake profiles, but had got lazy in trying to keep up the pretence. Or the producers needed to inject some kind of jeopardy to make the episode more interesting.

There really wasn't much to present to Ayissha that she didn't already know, but Ayissha admitted she was scared to meet the person behind Whidney, because ... well, it's not entirely clear. Surely if Whidney was a true threat, she would have been open to meeting up? I held my reservations as to whether Ayissha was actually being stalked, despite the heavy-handed editing and bad acting trying to tell me she had been. Add to this the two minutes it took Nev to convince Whidney to meet up with them, despite being able to avoid it for three years. It all seemed like a big fuss over nothing.
The catch

After a quick flight to Houston, the trio pitch up at a local park to meet Whidney. Like a dog waiting outside a supermarket, Max leaps up at any person walking by – in a public park – thinking they could be the catfish; men, women, pigeons...

Eventually, a nervous woman approaches them, and reveals that she is Whitney, and claims to be 26, but looks nearer to 40 – will the lies never end? She does admit to having numerous fake profiles she uses to catfish people, but Ayissha was the only person she was "dating", so at least she's loyal. 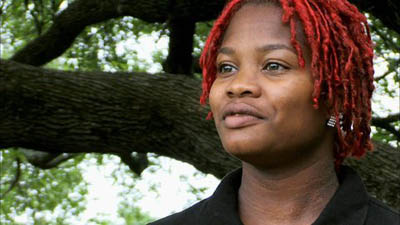 Can't say fairer than that.


Her reason for baiting Ayissha was that she felt she was so attractive, she wouldn't have accepted her for who she actually was. Ayissha does little to refute this, but does become annoyed when it's clear that Whitney got so wrapped up in all the other profiles, she'd lost track of all the lies. You're right, Ayissha, how dare she be a shit stalker?

Whitney had a hard time coming out, and so channelled all that hurt into meeting people online. Ayissha reveals that despite being in love, she barely knew anything about Whitney, but had told her all about herself. Clearly Ayissha was so self-involved from the off she didn't even bother to ask Whitney anything about herself, and wasn't aware that Whitney was basically phoning it in.

The most infuriating aspect however, is that the stalker angle isn't really followed up: Whitney says she never meant to scare Ayissha, but Nev and Max are so fed up they can't be bothered to ask how she did it. Man, I'm bored.

Ayissha's back at school, presumably because she's not found anyone else to blame for missing her exams. Whitney's enlisted in the navy, and has realised that her own hurt doesn't mean she has to hurt everyone else.

And I've realised you can't actually be stalked by someone you've never met, if they're not actually stalking you. New question: what do you do when a formerly great series has gone off the boil? Answers as and when I get them.