Here's a fun little game to play: it's called "How To Work Out Your Catfish Name"!

1. Think of a well-known, luxurious brand
2. Spell it phonetically
3. Then take the colour of your socks.

This week, Nev recruited Angel Haze to help him land his catfish; he described Angel as a "musician hip-hop rapper artist", which is probably the same way my dad would describe any urban artist in great pains to be polite. Angel had actually been catfished, and had cool hair so I was prepared to hear what she had to say.

Their mission was to help Harold, a college student, track down the girl of his dreams, Armani Brown. Harold, or Hal as Nev liked to call him, liked to shoot some b-ball outside of the school when a couple of guys, they were up to no good, and seven of his friends were shot over the summer he'd graduated from high school. Catfish artfully fading out his friends from a photograph, Back To The Future-style, tastefully illustrated this terrible and sad event.

He'd been talking to Armani on and off for four years, and had fallen in love with her despite only seeing one photo. When he got his first real-life girlfriend he did the decent thing and broke off all contact, only to be harassed by two of her friends called Babay and Deshyla via his mobile and Facebook. When Hal decided to get back in contact, Armani revealed she was pregnant, and then since had a little boy called Jrue, and Hal proudly showed off his pics on his phone. Awww.

Nev was prepared to give Armani the benefit of the doubt, after she had told Hal she was a janitor at a school, and not a superstar DJ/model/astronaut who couldn't Skype because the of the spotty wifi in space. But Angel was a bit like, "nawwwww". 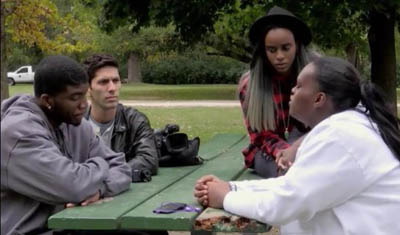 "Next time, just remember the picnic food, and we won't be having this conversation."
The hook

Some super-sleuthing (Googling her phone numbers) lead them to an email address registered to someone called Tamila, who looked very different to Armani by a few kilos. However, she had friends called Deshyla and Babay Gotem' Mad (I wonder if she's related to the Gotem' Mads in Portsmouth?). There were red flags that pointed to Babay being Armani – she had posted a pic of baby Jrue and she had an annoying habit Angel had picked up in texts to Harold of using q's instead of g's. It was confusinqq.

Nev reached out to Deshyla, who told him she was with Armani only an hour ago, and that Jrue was definitely her babay, I mean, baby. Apparently Armani constantly gushed about Harold all the time and did work as a janitor – everything she had told Harold.

Taking their evidence back to Harold, he admitted he would have difficulty if the Armani he was talking to was not the girl in the ONE picture he had seen, which was a euphemistic way of saying he didn't fancy Tamila. He did like the look of Babay, saying she was a "big step up from Tamila" much to the annoyance of Angel, who couldn't understand why a 19-year-old boy would base an attraction solely on looks