The official episode synopsis for this week's episode reads: "After helping with troubles at home, a man refuses to speak to his love interest on the phone." You, me and a million others, love. Spoiler alert: this episode may as well have been entitled "He's just not that into you".

Max is back! Oh, no, wait it's actually someone called Tyler who could pass for Max's younger brother, and who we are informed is a "YouTube sensation", whatever one of those is.

The red flags were out early this episode when young, free-spirited Daisy, who looked like a mixture of Pink and Miley Cyrus, and liked to tie shoelaces around her head, admitted she and her Instagram crush had only ever texted during their relationship; she may as well have been dating the monkey from 66668 Bongo (£2.50 per text message sent). 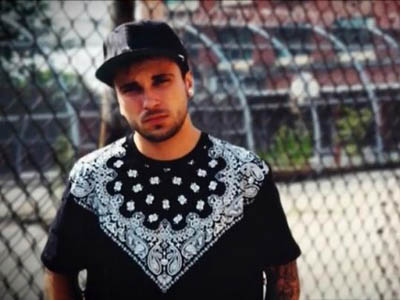 Please love me. I am hood-credible.


Marcus never answered her calls, and despite claiming to be a video producer in his bio, never video-called her either. It was obvious Marcus was either going to be 13 years old, or a woman.

As if things weren't already looking bleak, Daisy explained how "Marcus" had helped her get over some tough times: she lost her sister at a young age and a short time later her dad had also passed away. Worst of all, Daisy claimed her family blamed her for her father's death, in a way that played out like the worst kind of Hollyoaks storyline. Daisy's parents were none too happy to find out that back then, Daisy was dating a girl. Begrudgingly, the whole family except her dad went to take Daisy to the train station to meet her girlfriend, who had second thoughts and decided not to turn up. After dropping Daisy off, the family returned to find their father dead on the floor from an aneurysm and stroke. In her mum's mind, Daisy selfishness at being bisexual caused her dad to die, because otherwise they would have been there. Bit of a leap, love. Maybe he just had a terrible diet.

Not getting the emotional support she needed from her family, Daisy sought to get comfort from Marcus, but now texting wasn't enough. And the git never even thanked her for all her generous gifts she'd sent. No two ways about it, Marcus was a moocher.

Nev and Tyler discovered Marcus's phone number was registered to someone called Sandra, who became Suspect No.1. It turned out she was associated with someone called Marcus who was on the same phone plan, along with two other guys, who they deduced were his brothers and Sandra their mum. And their surname appeared on Marcus' Instagram account.

Before Tyler could get all excited, Nev pointed out that just because the Instagram account was real, that didn't mean it was Marcus she was speaking to, for our naïve young Catfishee had put her number in the comments section, so who knows who could have contacted her? It could have been Sandra still, or even one of Marcus's brothers, and Tyler was quick to invent a whole scenario in which this could happen with the enthusiasm of a Labrador puppy in a bone and ball shop. He even had a little pad to take Catfish notes on – clearly someone's not expecting Max to be back any time soon.

Nev rang Marcus, who as expected didn't answer, probably thinking it was another one of those PPI calls. He sent a text back saying he wasn't comfortable having his private life played out on TV, and would meet Daisy on his own terms. Was he just playing out Daisy's feelings, or was Marcus just simply very private? Or was he his own mum, reliving her youth vicariously through her son? 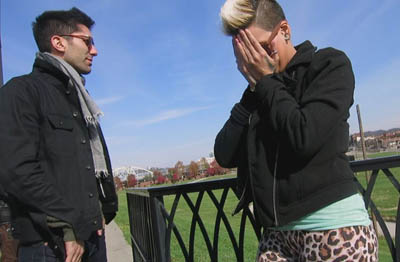 If you can't bear to look at your own trousers, you need to dress with more care.


There was only one way to find out: Catfish Ambush! The trio decided to head to Ohio to confront Marcus/Sandra and use up some of Nev's air miles. Backed into a corner, Marcus finally picked up the phone to call, so good news: he was a dude, but bad news: he was a fickle one. He agreed to meet, only to change his mind 24 hours later. Marcus was changing his mind more than Nev changed his co-hosts – what was he trying to hide?

Marcus changed his mind AGAIN, and said he would meet the crew in a local park. For some reason, Daisy decided it was best to meet the love of her life sat on a bin, when there was a perfectly good bench next to her – is that how free spirits express themselves?

Eventually "Marcus" showed up - and it actually was Marcus from Instagram. Never saw that coming.

It was far from a happy ending though – Marcus was still evasive when challenged by Daisy as to why he accepted her gifts but gave nothing in return. As they chatted later alone in a café, it became clear that for the most part, their relationship was mainly in Daisy's head. He told her not to send presents, but she did (although the douche didn't return them), and he was quick to push her into the friend zone when she asked if there was a future relationship for them. She had clearly built up Marcus to be the ultimate perfect fantasy boyfriend, enabled by his spinelessness for refusing to acknowledge she clearly felt more for him than he did her.
Three months later ...

Daisy was happy just being friends with Marcus, and he had gotten over his phone-phobia, so everyone seemed cool. I still have my suspicions Sandra's still behind this somehow though.