Tonight, on a very special Catfish: enough about protein shake ads on the tube: the real body-shamers are Nev and Max, who bust out the first "Secret Fatty" theory of the season.

This week we met Jamey, a young butcher from Texas who was hoping for his own meat-cute with Ari, who he'd met on Plenty Of Fish – or should that be Plenty of Catfish?

Ari wasn't an aspiring model or exotic dancer, but was a beautician who didn't live too far from Jamey. However, as is usually the case, she had plenty of excuses as to why they couldn't meet in person. After months getting closer and telling each other all sorts of things about themselves, eventually Ari told Jamey she had something to tell him, so they should meet after all – but only on Catfish.

At this point Nev and Max should have probably told Jamey to jog on (particularly after last week), but they were intrigued; Jamey and Ari had spoken a lot on the phone and actually Skyped, although Ari insisted on keeping her camera on an extreme close-up of her face.

Jamey was certain she was the girl in her profile features, and for the first time this series Max rang the "Secret Fatty" klaxon – I'm just surprised it took this long. Nev furthered the theory: "Maybe she's pregnant?" although Jamey told them Ari was a virgin and saving herself for marriage. Behind his back, Max and Nev quietly agreed Ari's secret must be that's she's a bit heavier than she appears in photos, puffing out their cheeks and making exaggerated hand gestures. 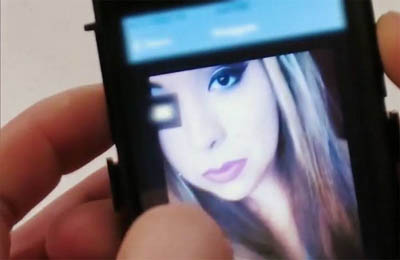 Best guess at this point: not beach body-ready.
The hook

Going through Ari's Facebook profile, the guys found her SHOCKING SECRET: she's not overweight, but she may be married, owing to a post where she talks about meeting her "in-laws" and a picture of her and a guy called Caz. But then why would she insist on meeting Jamey on TV? Had they blown the case wide open already?

The next day, Nev received a call from one of Ari's friends called Sophia, who told him Ari was really good at makeup, and she knew the guy in the photos who may or may not be Ari's husband. But before Nev could get a definite answer and ask whether Ari could comfortably fit into a row-boat, Sophia hung up. Rude.

Nev and Max sat down with Jamey to present their findings: they don't think she's been lying about who she is, but this Caz guy could be her husband. Jamey was still pretty keen, but as they are talking his phone starts to buzz. In a complete turnaround, Ari has been bombarding Jamey's phone with hostile texts about meeting up. Max asked why Jamey would want to be with such a person, whistling the theme tune to The Flumps and making whale noises, but conceded that perhaps the stress of the situation was getting to her.

Back at their hotel, Nev did what he probably should have done days ago and called Ari, who came across as completely spooked and confused. She admitted there was potential for her and Jamey to have a relationship, but she was nervous about meeting him and telling him her secret because she never thought she'd actually get to be on Catfish. Then she hung up. Super rude.
Nev called her back and she agreed to meet with Nev and Max before meeting with Jamey. Just what had Ari got to hide, other than a massive hide?
The first catch

The guys met Ari at a local park and looked relieved to find an average-sized woman, and not Jabba The Hutt. Ari explained that that she didn't intend to get in so deep with Jamey, because men tend to avoid girls like her. And finally she revealed her big secret – Ari is actually transgender, and Nev nodded as if he guessed that from the very beginning. 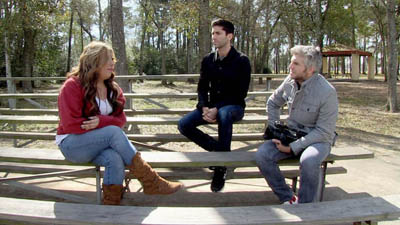 Of course. Come up and claim your prize if you had transgender.


She shared her story of growing up feeling different to everyone else and the process she was currently going through to become a "full girl". Being Captain Sensitive, Nev told her he thought she was married, but managed to bite his tongue to prevent him mentioning his actual theory was that she was pregnant. Caz was in fact her first boyfriend who knew she was transgender from the start: again, Captain Sensitive steams in and asks if they were lovers, as if it's any of his business, and a quick camera cut prevents us from seeing him silently mouth "But how?" to Max.

For reasons I don't quite understand, Nev and Max took it upon themselves to tell Jamey Ari's secret, rather than letting her do it herself. Jamey obviously has the internet so was aware it's a big, wide world out there, but initially there was some confusion when he thought Ari was born with both male and female genitals. "No, only one," states Max. He's shocked and says he needs time to think about it, but eventually agrees to meet with Ari in person.

It's a nerve-wracking experience for both parties: despite his "born with both" comment earlier, Jamey carries himself pretty well and asks Ari about being transgender, rather than being angry that in some way she may have lied to him about who she is. Ari becomes increasingly emotional and clams up, not wanting to talk any more about the situation. Despite telling Ari he's there to support her and she can tell him anything, Jamey admits that he's finding it difficult to move past her revelation. Upset that nothing can happen between them, and perhaps being pushed to talk on camera about something extremely personal, Ari walks away without so much as a by-your-leave.
Two months later...

Unfortunately, it wasn't the love connection we were all hoping for. Jamey and Ari continued to talk, but not as much as they did. He started to explore the local dating scene in his area, hadn't yet connected with anyone as he did with Ari, but felt that knowing her has made him better aware of other people's differences.

Ari, however, took the break-up a little harder. Although she wasn't keen to talk about it initially, she Skyped with Nev and Max and apologised for her behaviour in the park (although not her shitty texts to Jamey). She's still heartbroken, but is feeling stronger every day.

The episode ends with Nev and Max giving a moving speech about being transgender and how different people choose to reveal that information, sometimes at a cost to their own safety. Nothing about being secretly overweight though, the fattists.