"There are greater things in heaven and earth, Horatio, than are dreamt in your philosophy." Shakespeare, eh. He knew what was up. Tonight on a Very Special Catfish, Nev and Max are on the trail of a psychic sending messages to a young girl from her dead father, because busting makes them feel good.

Believe me when I tell you that this is one of the most intense episodes of Catfish ever. Kayla was an 18-year-old stay-at-home-mum whose life story sounded like one of the more extreme plotlines from Hollyoaks. A woman called Courtney contacted her two years ago, claiming to have a message for her from Kayla's father ... except Kayla's father had been dead for 14 years. Strap yourselves in, folks: we're breaking through to the other side.

When Kayla was just a toddler, her father stabbed her pregnant mother to death before taking off in his car with Kayla and her sister in the back. He was eventually caught when the police shot the car and it spun out with them all in it. A few years later, he had another "mental episode" in prison and committed suicide. Kayla was raised by her grandmother and stayed close to her father's side of the family, including his sister Shannon who explained to Nev and Max there was a history of mental illness within the family that affected her father also.

Poor Kayla became emotional as she told her story, and Nev and Max looked increasingly out of their depth. After mourning for her family all these years, out of the blue Courtney messaged her via Facebook, telling her that her dad wanted to get in touch. Although Kayla initially dismissed her, Courtney came back with particularly specific details about Kayla's dad, Frankie. Stuff about how he liked to eat his burgers witch ketchup and no pickles, his favourite brand of cigarettes and his favourite basketball team. Why the other side are so obsessed about passing on their McDonald's order is never explained. She was also able to give information about Frankie's suicide, proffering "something around the neck with suffocation".

This was a bit more than lying about your profile picture and claiming to be a rapper/model. 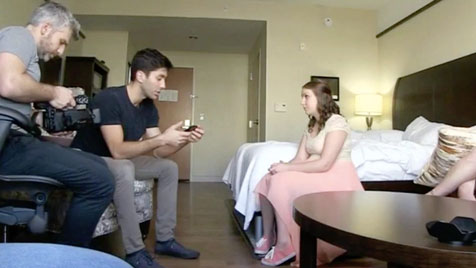 Is she ... is she LEVITATING? OH MY GOD wait, it's just the way she's sitting. Sorry, I got overexcited.


It was enough to convince Kayla and her grandmother that Courtney was legit, but although they had spoken on the phone, Courtney was always unavailable when Kayla wanted to meet up. Other than the insanity of the dead dad stuff, Courtney displayed classic Catfish behaviour. Kayla was excited to have this contact with her father and wanted to believe all this was true, but Nev and Max couldn't help but feel perhaps Courtney had an ulterior motive.

Except that she didn't appear to have one. Throughout the course of their communication, Courtney had not asked Kayla for money or appeared to use all this info against her. WHAT IN THE HOLY HELL IS GOING ON?

Before they head out to kickstart Operation Scooby Doo and unveil Courtney as Old Man Withers from the abandoned amusement park, Shannon pulls aside Nev and hints that there are darker secrets within the family that Kayla doesn't know about. Kayla wants to maintain a perfect picture of her parents, and to extend the analogy, Courtney was painting that picture for her. Poor Kayla, but also, ooohhhhhh, what dirt are they going to rake up?

There are two avenues for Nev and Max to go down here. That's whether Courtney is actually Courtney, and also whether she is telling the truth; the truth being that the spirits of the deceased are picking people at random to pass on messages from the other side and what their favourite brand of fags are. I'm not entirely convinced finding evidence of the supernatural via MTV is the most appropriate way to break this news to the world, but hey, it's 2016. I found out Osama bin Laden had been killed from Gary Neville's Twitter feed.

They decide to go down the second route first, because why not go straight ahead and tackle the paranormal? It's decided that they'll see what info there is readily available on the World Wide Web so they can see how Courtney did it. Within Kayla's Facebook there are a few pictures of Frankie wearing a Chicago Bulls shirt and possibly a Titans cap, which would explain Courtney's knowledge of his favourite sports team. Additionally, it's on public record that Frankie hung himself in prison.

Seeing as Frankie died before Mark Zuckerberg launched Facebook, however, there's no way for Courtney to know about his taste in burgers. It's at this point Nev and Max feel that they've reached an impasse with their investigation into the paranormal, so the search turns to Courtney herself.

Her Facebook page checks out, although her profile pics do make her look slightly manic; someone's been practising their smizing! The guys decide to reach out to someone called Eric who comments a lot on Courtney's page to see if he knows what's up.

Weird shit alert no. 1: At Kayla's house, Eric's wife, Erica calls Nev and Max back. That's Eric's wife, Erica. They share a Facebook account, which is not at all creepy or suspect, but Nev decides not to pull her up on it. With Kayla listening in, Erica explains that Courtney is totally legit: Erica has even felt Frankie's presence, to the point he's even considered part of the family.

Which is not great news for someone who's been longing for a family for most of their life and never really knew their father. Kayla breaks down and questions why God would take her parents from her and then have them get in contact with a stranger. Yeah God, what's up with that?

It's time to call Courtney, who sounds affronted by the fact someone appears to be questioning her medium skills. She's also confused by the fact that Kayla wants to meet her, but agrees to convene with the Catfish crew.
The catch

Weird shit alert no. 2: before Courtney turns up, Max films a raccoon staring at them which is standing on its hind legs, and for a moment it looks like things are going to go a bit Antichrist. Could this raccoon also be contacting Kayla's dad? 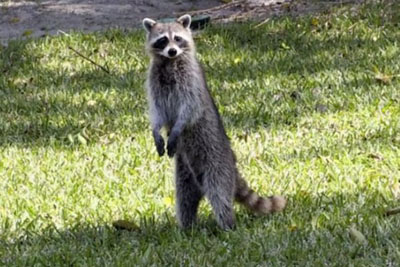 All the evidence points to "yes".


Before the varmint starts speaking in tongues, a very heavily made-up Courtney arrives with a maniacal fixed grin and exclaims, "You've got your dad's eyes!" It's creepy AF, not made any better by Courtney pulling Kayla into an awkward hug. Kayla looks as though she's about to puke; Nev and Max look like they want to get the hell out of Dodge.

Courtney starts to ramble on about her "gift", and takes it on the chin when Nev asks if she's ever got a medical opinion about her mental health. Apparently her doctor thought it was all OK to be talking to a dead murderer. She explains that she was scared to meet in case she didn't match up to Kayla's expectations, exactly the same reason why "Psychic" Sally Morgan refuses to be scrutinised under test conditions, and nothing to do with the fact she's an unscrupulous charlatan.

Unusually, it's Max who's sold on Courtney, whereas Nev's slightly sceptical – weird shit alert no. 3. In the midst of an existential crisis, Kayla decides she requires more proof and asks Courtney for more info that she couldn't possibly get through Googling. You couldn't have asked her this before? Courtney is purposefully vague, mentioning "life choices" before hitting Kayla with it; she knows her mother was a stripper, and that her dad used to get locked in the cellar as a kid.

Overwhelmed by these "facts", Kayla returns to Nev and Max and says she's not sure how Courtney could have got this information without speaking to her aunt, Shannon. Could Shannon be behind this whole charade, as a shitty way to get Kayla not so hung up on her parents?

The gang pitch up at Courtney's house the next day with Shannon, but it doesn't look like they know each other. Courtney is acting nice – like, super nice, and is overly charming. It's still creepy. Courtney claims to have talked to Frankie the previous night, who told her that Shannon was a bossy bitch. Shannon agrees, although is this psychic info or just that Courtney's incredibly perceptive?

Weird shit alert no. 4, and even more disturbing than the raccoon and Courtney's shit-eating grin, Courtney reveals Frankie had an affair with his foster mum. And he's also haunting her, like actually tormenting her at night. 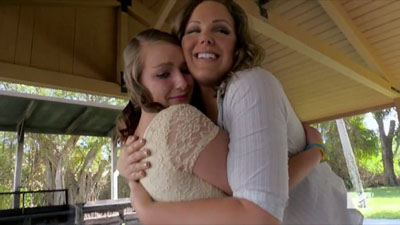 "Your dad used to give hugs sometimes, didn't he? That's just one more of the totally specific details he told me from beyond the grave."


Shannon is shocked Courtney knows the big family secret, as is Kayla because, sigh, weird shit alert no. 5, six years ago she was contacted by the foster mum saying she could weirdly smell cigarettes and alcohol which reminded her of Frankie. For reasons that are unknown and infuriating, Nev and Max don't ask Kayla why she didn't disclose this before, nor do they immediately ask for her number so they can get her side of the story.

Weird shit alert no. 6. Frankie turns up. Obviously, we don't see him (because ghosts aren't real, duh) but Courtney says he's reluctantly joined the conversation. Shannon gets the chills, and Kayla tells him she forgives him for everything he's done. Courtney relays messages back saying Frankie does actually visit Kayla and Shannon at night, so he's not a total deadbeat dad.

And that's it. Seriously. The three women agree to keep in contact, and Nev and Max seem totally at ease with the fact that they appear to have some kind of proof that THE DEAD CAN SPEAK TO THE LIVING.

On-screen graphics inform us that Kayla and Courtney are still close, and Kayla has asked her to be godmother to her son.

Life lesson learned: everything I know is wrong.