We've had people claiming to have been kidnapped. We've had double-reverse catfishes. We've had lesbian smackdowns. We've even had ghosts. Where oh where can Catfish go from here?

Paris and Tara met in a chatroom, because apparently it's still 1997. Despite being so in love, they had never video chatted, and when it came for them to meet, a car accident prevented Tara from making the journey. Her injuries forced her to go off grid, because the radiation from her phone hurt her brain. We've had people come back from the dead, but this girl can't use her phone? Some people have no imagination.

Two years later, Tara got back in contact with Paris, which aroused her suspicions. Finally, however, we had someone who had actually seen an episode of Catfish and Paris reverse-Google-image-searched Tara's picture, which was actually of a girl called Dana from New Jersey.

At massage therapist Paris's tastefully appointed home, which is absolutely no way another Airbnb, Max asks if she has anyone in mind who might be behind the Tara catfish. Turns out, she has two prime suspects: there's Nicole, who she dated in real life but met in the same chatroom, but broke up with because Paris identified as bi, whereas Nicole was (in Paris's words) a "full-on lesbian" and had jealousy issues.

And then there was Mary, who originally lived in another state and then upped and moved with her son and mother to live with Paris and her mum. Except that she had forgotten to tell Paris about her plan. Maybe she got the dates wrong on the Airbnb check-in? Paris's ma wasn't too happy about having three strangers move in with them, and similarly Paris thought Mary's behaviour was a bit too full on. According to Paris, after this slight misunderstanding Mary went psycho, and messaged Tara in the chatroom, telling her to stay clear of Paris. (Not the city, although maybe she found that the Airbnbs there weren't up to standard? I'll stop now.) The plot thickens. So far though, I don't think anyone's a ghost. 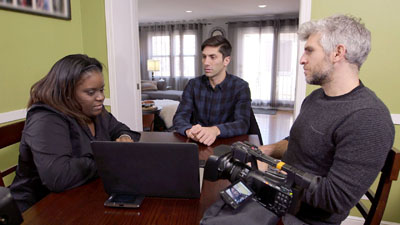 Nev and Max interview Paris. Not pictured: any ghosts.
The hook

The main investigation centres on Nicole and Mary, the latter of whom Max points out doesn't sound above inventing a fake profile to fuck with her ex. Paris doesn't really give them much else to work with; she only has Tara's Yahoo username (it's still 1997!) and the four photos Tara sent, which she already knows are of another girl.

The guys contact Dana, the girl in the photos, who tells them she doesn't know Tara but also doesn't seem too bothered by the fact someone's stolen her images. While that's a bit weird, they can rule out Dana even though it's so obvious it's one of Paris's mental exes.

Nothing comes up when they search for Nicole, so after messaging her they go straight to Scary Mary, who is now happily married and hashtag blessed. But she has some news for Max and Nev; Paris is not quite the innocent party in all of this. In the chatroom where they met, Mary claims Paris was actually the one catfishing people, and that she warned Tara to protect her. Do we have a double catfish, or is Paris catfishing herself? "Now we have a new suspect," muses Max. "The victim." Dun dun dunnnnnnnn. At no point do they question Mary – a woman who apparently doesn't tell people she's going to move her and her family in. According to Nev, she "doesn't sound like she's lying". I'm starting to question whether Nev's actually seen an episode of Catfish.

Back at Paris's gaff, Nev and Max really turn up the heat by trying to get Paris to confess by raising their eyebrows at her a lot. She shrugs and says she has nothing to tell them, but looks a bit shifty. Paris is burning, yo. Sitting her down, they reveal Mary's accusations of Paris being the catfish. Paris doesn't look too shocked, and admits she pretended to be other people when she first started going into chatrooms, but this was way before she met Mary. But she didn't sound like she was lying! Who are we to believe now?

Since Nev and Max haven't really gone much further into establishing who Tara actually is, the only option is to call her. Straight away, Tara admits to Nev that it's not her in the photos, but she's worried Paris won't accept her for who she is, and then asks Nev if she can call him back. Inside, Paris receives a creepy text from Tara, saying she wants to meet but first Paris has to tell her she loves her. Max, loving the drama, bolts outside to tell Nev, who returns to find Tara has sent another text saying she's inside the house...

Actually, she doesn't, I made that bit up. However, she does text Paris again asking if she ever loved her, and then calls Nev saying she's ready to meet. At this point, Max realises Nicole never got back to them, so it's still anyone's guess who Tara actually is.
The catch

At the address Tara gives them, the crew are sent around the back of the house by another creepy text. As someone steps out, Paris immediately recognises who it is; it's Scary Mary. Dun dun dunnnnnnnn. "And you said you could never love me," she sarcastically spits. Erm, it's kind of easy to see why, Mary.

Aggrieved that Mary had the temerity to lie to him, Nev immediately goes on the attack, because how dare she. He calls out her out for saying she was married and happy, which she says she is; this is all just for revenge, because it's a dish best served mental.

Nev starts to point out that this was a lot of trouble for Mary to go to, but Mary is champing at the bit to get her side of the story across: Paris had told her they were going to live together, and told her to come to Chicago. Paris doesn't deny it, but implies that Mary neglected to mention that her mum and son were part of the package too, and made it her responsibility when she was only 19 to house them all. Mary asks Paris to tell everyone where she put her instead, and Paris is forced to admit that after one night Mary went to a homeless women's shelter. Mary looks pleased at seemingly gaining the higher ground, except that no one questions why a 24-year-old woman would drag her family across the country to live with a virtual stranger with no job and no savings.

Max asked what happened next, and Mary tells him they then all moved to South Carolina, where she met her wife. He asks if she's happy, which she emphatically agrees. "And let me remind you all, I took care of myself when I first moved to South Carolina." Congratu-fucking-lations, Mary. Couldn't you have done that when you first landed in Chicago? Max seems disturbed by Mary's craziness, but Nev steams in and asks how she managed to disguise her voice on the phone. It turns out Mary got her wife to talk to Paris on the phone, because she knew she "deserved it". Mary then says she is done with all of this, and flounces back inside. Back away, everyone. This could end badly.

When Max and Nev return to see Mary alone the next day, she still maintains Paris deserved everything that happened because of how she destroyed her life. Claiming that Paris had indeed promised her that she could live with her, she was devastated when Paris dropped her, her mum and her son off at the shelter, saying that Paris's mum wasn't totally down with the idea of looking after three more people. Nev defends Paris, saying she was young and obviously unable to overrule her mother. Mary acknowledges this, but wanted the love Paris had promised her, so when she didn't get it she set out to hurt Paris in the same way she imagined she'd been hurt. You know, in a way a narcissist would.

But then why carry it on for five years, even after she got married and settled down? Mary claimed that after a while it stopped being malicious and she just liked being able to talk to Paris as a friend. I wonder what Mrs Mary makes of all of this? A bit too neatly and well-rehearsed, Mary says this is the last lie in her life, and agrees to meet with Paris the next day. 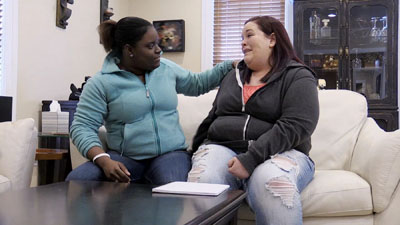 Not "full-on" lesbians, just on the weekends.


Although angry and frustrated at being played, Paris goes to Mary's with Nev and Max. Mary has prepared a statement that she would like to read aloud, and acts as though she's addressing reporters outside of a courtroom as she tells Paris about how revenge turned into actual feelings of compassion and concern.

Paris gives a token apology for the way she handed the situation, and Mary in turn says she realises she may not have thought things all the way through before turning up on Paris's doorstep. Ya think?

Both women seemed to have cooled their jets considerably, and made up. Where are the tears, and the bitch slapping? Someone needs to bring Courtney in to reveal some more disturbing revelations from the other side.

Paris tells Nev and Max that she met up with Mary and the family she was accused of abandoning all that time ago, but although they made amends they haven't remained in contact.

Mary says she's still hashtag blessed, but now she's got closure and is sorry for hurting Paris. I mean, she doesn't sound like she's lying.