Momma doesn't always know best. In this week's episode, we have our very first MILC: Mum I'd Like to Catfish.

Jeanette was a glam 40-year-old from Orlando who had never seen an episode of Catfish, so she was completely unaware that the relationship she was having with Derick, a 27-year-old forklift driver with model good looks and broken camera phone was obviously a classic case. (She was also a grandmother, which actually made her a GILC.) It was up to her 21-year-old daughter Shuntay to bring in the big guns.

Shuntay was actually pretty good at hiding her exasperation with her mother, which I personally found impressive as I find it hard not to scream into a pillow every time my mum sends me yet another all-caps text. Jeanette had met Derick on Plenty Of Fish nearly a year ago, but in textbook fashion they had never met due to his demanding forklift schedule, nor had a proper video chat, despite Derick sending particularly romantic texts and hinting that he wanted to get married. They had spoken on the phone, and apparently he had a "sexy" voice, but as regular viewers know, this doesn't always mean a dude is on the other end of the line, because sometimes women can put on sexy deep voices.

I'm guessing it was because Shuntay was the one to call it in that she was allowed to sit in on Nev and Max's investigation, and not because they hate each other so much now they need a buffer between them.

Initially Derick's Facebook page doesn't look too suspicious. All the facts he gave Jeanette about his life are in his personal details, even the fact that he's a "Laboror" [sic], the saving grace here being that at least he's not claiming to be a rapper/model. Which is odd, given that the majority of pics he had sent Jeanette were professionally lit portfolio shots. It's a sad sign of the times when catfishes start to lack ambition with their fake profiles. 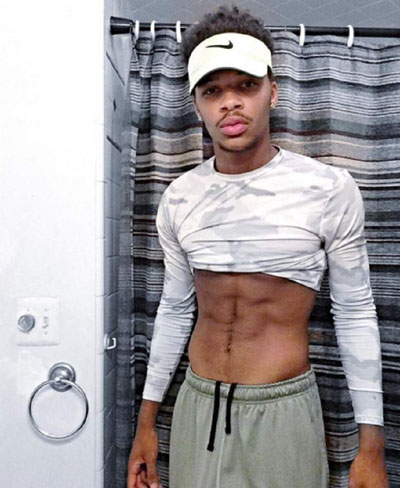 This is not how T-shirts are meant to be worn.


However, Nev points out a Snapchat pic he has posted shows that his camera phone does work after all, although Shuntay doesn't look particularly fazed. I'm really hoping Shuntay is eventually exposed as somehow being linked to Derick, and isn't just bad at hiding the fact she may have already found out who he is.

A Google image search – the very thing that Shuntay could have done herself to prove to her mum her relationship wasn't real in less than a minute – reveals the guy in the photos to be someone called Jermale. So why don't Nev and Max video chat with him to see what's up? Maybe it's due to the small fact that Jermale is still in high school. It's evidently clear Nev and Max don't think Jeanette has actually been speaking to the teenager, and that someone has stolen his photos, but Shuntay delivers some priceless insight by saying her mum is going to be "really sad" if she is. You don't say.

Shuntay has spoken to Derick on the phone, and confirms he has a deep voice, so Max has to break it to her that they've had cases like this before when it's actually been a woman. Like, a lot. Phone records show that Derick's number is actually registered to a "Derica" with the same surname, lending more weight to this theory, to which Shuntay replies, "I hope not." SO glad you're here, Shuntay.

Jeanette does not take the news well, firstly because she's been "talking to a baby", and secondly because she's probably scared MTV now have enough evidence against her to send her to prison. In a twisted way, Jeanette is more ready to believe a teenager duped her rather than the fact she may have been romanced by a woman, despite what Max tries to tell her.

Nev gives Derick/Derica a call, but doesn't mention anything about how she was too lazy to think up a better name further removed from her own. Derick/Derica says that they love Jeanette, but "stuff" prevented them from meeting in person. When Nev pulls out his ace card and reveals they know they're not the person in the photos (to show to any police watching that Jeanette isn't a paedo), Derick/Derica admits that they lied about their age, and are actually 31. In the grand scheme of things, is shaving four years off your age really that big of a confession, Catfish producers?

Despite the "shocking" news, Jeanette still wants to meet the person she gave her heart to, and so it's off to catch a Catfish.

Duh-duh-duhhhhhh ... we already know that "Derick" is not Jermale, or indeed any sort of male, so it's no real surprise to anyone when Derica steps out of her house to meet everyone. No surprise to anyone apart from Jeanette, that is. Maybe she was still holding out some hope, but then you can't blame her; she's never seen Catfish before. But Shuntay has, and you have to wonder why she wanted to put her mum through this. 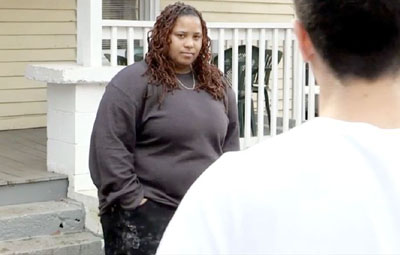 Could still be him, right? His T-shirt's too long to tell for sure.


Derica mumbles something about being bored and creating an online profile, but everyone just looks embarrassed to be there. Even Jeanette can't muster up the energy to be properly angry. Max tries to drum up the drama by saying that it's all "tragic", but what's tragic is this rather flat confrontation.

The next day, things get a bit weird. Derica still maintains that she loves Jeanette, which then segues into a conversation as to whether they could actually have a baby together, despite Jeanette making it clear she's not into women. It appears Derica still wants to make good on all of Derick's promises, despite lacking the required anatomy.

In a sad bid to give this episode a bit more depth, Nev does a quick skim of Derica's sad backstory: she lost her mother and grandfather within a few days of her 16th birthday, and after a brief spell in prison she got into relationships with older women so that they'd look after her. Unlike with previous Catfishes, Nev doesn't really dig down into specifics. Whether it's because he feels sorry for her or like Max he has started to check out, I'm not sure.

Jeanette and Derica part on subdued terms: Jeanette doesn't want any more contact, not even as friends.

The one surprise to actually come out of the episode is that Jeanette and Derica remained friends, although they only spoke occasionally. No one thinks to ask the bigger question as to why Shuntay didn't do the research she could have quite easily done herself, and instead humiliate her mum on television. Not even my mum would deserve that, even with her shouty texts.