What's in a name? I blame the parents. If they can't be bothered to spell your name properly, you're on a losing path from the start. Look at the revenge Shuntay played on her mum last week for giving her such a made-up moniker. It was hard not to feel sorry for this week's catfishee Leuh, whose parents decided the common spelling of "Leah" wasn't good enough and gave her a name that when written down looked like the sound you make when hocking up a glob of phlegm. But then Leuh was about to go to college and apparently didn't know how to use the internet, so it wasn't that hard not to feel sorry for her after all.

Leuh had Justin met two years previously on Instagram, and he sent her texts with emoji hearts so I guess you could say it was pretty serious. Young Leuh was considering college courses in California in order to be closer to him, but given she'd fail spelling her own name on the application form, Leuh was more like Le-DUH.

Here was a supposedly well-educated (enough to get into college) 19-year-old who had grown up in the social media age, who genuinely believed that this good-looking young man with a fairly prolific Instagram account didn't have a working video camera on either his phone or computer. They had never video chatted, and Leuh hadn't even bothered to check whether he was on Facebook. Had this been me at the same age, within minutes of our first online meeting, I would have set up numerous Google alerts and compiled a robust dossier documenting every move he'd made on social media. Kids these days don't even know they're born.

Even more alarming was the fact Leuh had got herself tatted up to be more like Justin's "type", as he had tattoos too. This was all for a guy who had stood her up on two separate occasions and had now committed the ultimate betrayal: Justin had blocked Leuh on Instagram. The monster. Leuh was devastated; she was only on his page just yesterday! Nev asked Leuh if she had told him she'd contacted the show, which at first she denied but then even Leuh realised if she lied now she'd get caught out, so hinted that yes, she may have done. Max tried to soften the blow by suggesting Justin had perhaps starting following him and Max on Twitter and seen they were in Leuh's home town, but still ... no. Nev and Max left to root out Justin, saying "This is going to be bad." Oh god, I hope so. 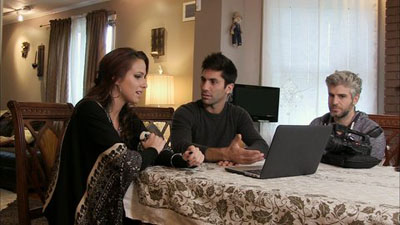 "With a U? An actual U? Look, I'm not typing that. On principle."
The hook

Starting with Justin's phone number, they got a hit straight away: Justin's phone was registered to a woman called Rita with the same last name and same address. Could Rita be Justin? Could we be that lucky? Another look at Justin's Instagram showed him tagged in lots of other people's photos, in particular his mate Todd, whom Leuh had heard him mention before. This all meant it was certainly possible Justin was who he said he was.

Then it was on to Facebook, where would you believe it, there he was. Leuh could have saved herself a lot of agonising if she'd bothered to spend two seconds typing his name into the search bar. Everything seemed to check out, until Max spotted some "flirting" (one message) between Justin and another girl called Jamie, who like Leuh had tattoos and was planning to move to California. This was a coincidence too far for Max, who immediately declared Justin to be a "serial internet man-slut" who was breaking girls' hearts left, right and centre. I mean, that's pretty limited evidence even for Catfish, but we've been grasping at straws for a long time now.

Never has a catfish checked out so quickly. Nev and Max mused on the possibility that Justin didn't want to meet Leuh not because of her silly name, but because he may already have a "healthy young lady in his life", by which regular viewers of Catfish will know Nev actually means "not fat". Or maybe, just maybe, Leuh had read too much into their relationship? She wasn't really one for picking up subtle hints, let's be honest.

The next day, Justin's friend Todd rang them back and told them Justin has never mentioned Leuh to anyone, so maybe the best course of action was to just grab Justin and make him meet her. Clearly, Todd didn't GAF. They swiftly moved on to Jamie, whose story read like Leuh's: she and Justin met over Instagram, were in love and had discussed her moving to California. Jamie was curious to know why Justin was going to be in an episode of Catfish, and seemed honestly taken aback when Nev broke the news there was another girl he'd been talking to. Sadly, they didn't delve any further or offer to bring her along to confront Justin, and left Jamie to deal with the news to then go and shatter Leuh's world as well.

Understandably, Leuh was upset when she found out about Jamie, reacting to Justin sending Jamie emojis as well as her with the same despondency as if she'd just seen their wedding photos. She wasn't consoled by the fact that it probably was Justin she had been talking to, but also unable to face the fact their relationship was completely superficial. Justin wasn't even interested in meeting Leuh when Nev rang him, leading to a good old-fashioned Catfish ambush.
The catch

Nev, Max and Leuh flew to California and to Justin's house. Nev approached alone, worried that the cameras might scare Justin off. Justin wasn't home, but his dad was, who wanted to meet Leuh. Gasp – was he the catfish? Sadly, Justin's dad just wanted to say hi, and had nothing to do with this sorry saga apart from the producers wanting to inject some drama. Just once I want it to be a creepy old guy. Is that too much to ask? Justin's dad told Leuh she was "very pretty", and healthy/not fat too, right Nev?

They got in contact with Todd, who conveniently told them Justin was at the beach, like right now. Off they go, and there he is, just gazing out to sea without a care in the world and not like this was staged in any way at all. He didn't seem too surprised to see Leuh, and although gave her a huge hug, got defensive as to his reasons for not wanting to be on the show (reasons I should point out the show ignored just to try and prevent this dumb girl from making any more stupid decisions). Having seen the show before, Justin was well aware that the catfish rarely comes off well – a good point, but then he whinged that meeting on the show wasn't in either of their best interests, but Leuh had decided differently, forgetting that he was the only person blocking them meeting off-camera in the first place. 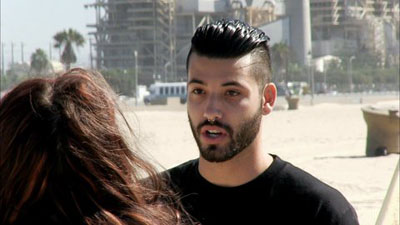 Justin, taking time out of his busy grooming schedule to explain himself.


When pressed on why didn't he meet her back then, Justin revealed he had a girlfriend at the time, and didn't want to cheat on either of them. So instead, he continued to string Leuh along, and to an extent, she allowed him to. What a stand-up guy. Nev and Max got ready to unleash hell, until Justin turned on the charm, asking whether he'd ruined any chance of a relationship, which Leuh lapped straight up. Ugh.

Seeing that Leuh was about to waver, Max reminded us all about Jamie; you know, the other girl who thought she was moving to California too? They were just friends apparently, and it was her fault for reading too much into it because he never said they were in a relationship. I would have really liked to hear from Jamie right now.

Still out for blood, Max moved on to ask why no one in Justin's life had ever heard him talk about Leuh. What about that, huh? Awww, the poor guy was just worried about what his friends would say. Surely Leuh would wake up now, but Justin continued that it's not like he was ashamed of her, "I mean, look at her. There's nothing to hide with that." Exactly the words that every girl wants to hear; it's not as thought she was actually some bloated whale and he was only into her for her mind, guys! This was still not enough for Max: "But Leuh's a pushover!", which shocked no one. And he still hasn't told her how he feels about her. Justin claimed he was overwhelmed by the cameras (that he apparently didn't know were coming), but then didn't feel so overwhelmed that he ACTUALLY STARTS TO TALK ABOUT THEM GETTING MARRIED.

It takes a good five seconds for Leuh to "forgive" Justin and they start hugging, but Nev still wants answers and Max wants Justin's head on a spike. Justin hasn't done enough for them to be convinced Justin actually has any feelings for Leuh, and is basically gaslighting them. Justin still sticks to the excuse of not wanting to jeopardise their relationship by being on the show, but my Catfish-senses tells me he's just incredibly relieved that they probably didn't manage to dig up the rest of the dirt on him. Nev tries to give him a get out of jail free card, saying if there's any chance things might not work out between them, he should end it now, but Justin doesn't bite. If even Nev isn't giving the benefit of the doubt then things must be really bad. But it's enough for Leuh, and they walk off into the sunset, arm in arm.

Justin promises he's not going to disappear when Leuh turns up, and makes another joke to Nev and Max about him and Leuh getting married. Nev and Max conveniently forget to ask him about Jamie and why he blocked Leuh on Instagram when he discovered he was going to be on Catfish, so I guess we just forget that ever happened. Is Catfish trying to gaslight US?

However, everything is right in Leuh's world – Justin's making more of an effort to video chat. Hurrah! However, he still hasn't asked her out properly, even though she's about to move across the country just to be with him. Four words, Leuh: don't be so dumb. Maybe get it tattooed on your arm?