I could start a dating advice blog based on how many episodes of Catfish I've endured. Throughout my need to better understand 21st century dating, I came across the term "ghosting", which refers to the act where one person in a relationship suddenly ends all communication, rather than simply admitting they're not interested in the other person any more. An example of this would be a co-host of a long-running reality series suddenly disappearing four episodes into a new season without explanation. Are you reading this, Max? I have one question: how dare you.

So, yeah – Max is ghosting us again and is apparently unreachable on "vacation", so in his place we have another celebrity stand-in like we didn't learn anything from the last series. Wielding the miniature camera is "social media superstar" Karrueche Tran, who despite what it says on Google actually seems quite a decent sort. Nev and Karrueche are in Washington to help 18-year-old Brandon track down McKenna, whom he met on Kik, which is a thing I couldn't be bothered to look up and am probably too old to understand.

Brandon became heavily involved with McKenna during a difficult split with his ex, and by heavily involved I mean they'd never even spoken on the phone or met up even though they lived only 10 minutes apart. Her parents were extremely strict and only allowed her an iPod Touch to communicate: someone call child services. One day McKenna announced she was moving to Florida, but remained vague as to exactly where, leaving Brandon to hope that one day she might move back to Washington to live with him in his parents' basement. What an absolute catch.
The hook: part one

The investigation begins with Nev and Karrueche looking up McKenna's phone number, which they find is connected to a landline with a Florida area code. However, it could just be a web number, meaning that this result means nothing. A reverse Google image search on the photos McKenna sent Brandon also throw up a blank, until Nev suddenly "remembers" you can look up the metadata attached to a photo. This reveals a random Spanish phrase, which leads them to a Facebook page for some guy called Dewey, who has a girlfriend who looks exactly like McKenna. Except she lives in Spain and is actually called Maria Perez, literally the most Spanish name ever. Couldn't the Catfish producers have been just a little more creative? 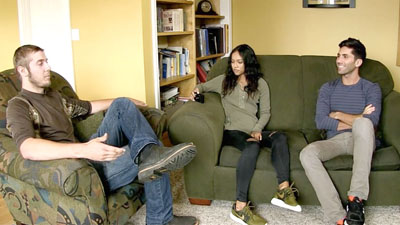 Or encouraged the guy to dress up a bit?


Once again, on very scant evidence Nev presents his findings to Brandon, who is visibly crushed to learn that the girl he claimed to be in love with, based on nothing more than some pics and texts, was not the girl she claimed to be. A girl he loved so much he couldn't even be bothered to phone her? The fact that he couldn't even do the minimum amount of work to contact her suggests he probably had a vague idea all along he was being catfished, and/or was in complete denial about the whole thing. Sometimes the worst lies are the ones we tell ourselves, which will be the title of my opening feature on my new love advice blog (full name tbc).

Nev puts in a call to McKenna but reaches her voice messaging service, meaning he gets to hang out at Brandon's house for whatever US holiday they're having at the time of filming. All his friends come over, including his friend Nikki, so it's fairly obvious she is going to be important later on.

Over the BBQ, Brandon admits to Karrueche he liked McKenna's personality mainly because of the way she looked in photos, meaning if he didn't fancy her, he probably wouldn't have been bothered to talk to her. No matter what though, he says, he still cares about her. LIES. ALL LIES.

Although he's being doing this for five seasons now, Nev suddenly realises that maybe they didn't carry out a particularly thorough investigation. You don't say, Nev. They decide to look up McKenna's Kik username, and what do you know, it's also her Twitter handle. And then Karrueche spots an old picture of Brandon with a girl within the Twitter feed along with an insidious remark, and the whole thing's been blown wide open.

The girl in the photo turns out to be Brandon's ex, but the pic was only ever on Snapchat, meaning that McKenna has known Brandon longer than he's known her, and has probably been keeping tabs on him. We've got a stalker, people! Hurrah! Scrolling further down McKenna's Twitter feed, Brandon sees that she talks a lot about Harry Styles (don't we all?), which explodes something in his brain. Trying his best to look surprised (I'm not convinced by Brandon's acting) he reveals that there's a girl he went to school with who's been in love with him for ages who also likes Harry Styles, so there's our smoking gun. This girl Kharece was his ex's best friend, but her obsession with Brandon ended their friendship. Seriously, this guy?

Brandon is emphatic that he's not interested in Kharece at all, but that she is obsessed with him, to the point she just likes to randomly pop in and see him all the time. All signs point to Kharece (who it turns out is Nikki's BFF), being behind the McKenna profile, something that had not occurred to Brandon before. Nev decides not to do anything with this info straight away, meaning that Karrueche can pump Brandon for more info about his relationship with Kharece.

Because it turns out they were more than acquaintances, they were bona-fide friends with benefits, fuck buddies, smashable amigos; whatever you want to call it, they had been bumping uglies. For four years. So when Brandon said he wasn't interested, what he meant was that only for a quick bang now and again. Oh, he's a keeper this one.

At Nev's suggestion, Brandon texts Kharece who turns up straight away, presumably because she's kept her motor running in Brandon's drive waiting for another booty call. 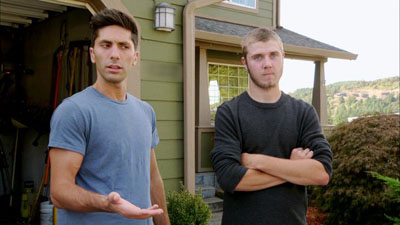 This guy's mad as hell and he's not going to take it anymore until the cameras are turned off.
The catch

Kharece immediately opens up to being "McKenna"; it was something to do with a Yik Yak, whatever one of those is, and not anything to do with Brandon until he connected with her online. She messaged him out of curiosity to see where it would go, but agrees with Nev that it had definitely got out of hand. "You made some wrong judgement there," says a bitter Brandon, who says she could have just texted him as herself, but because she didn't she ruined all chances of capturing his heart and getting to live with him and his parents. Poor Kharece insists that he would have never had replied to her, and the only thing she lied about was her name, and her pictures, and where she lived. Hadn't he said he loved McKenna, "who just happens to be me?" Brandon scoffs at this, and stamps his passport for a one-way trip to Doucheville by spitting out "Yeah, but it's YOU." This guy suuuuuuucccccckkkkkkkks.

The next day, Nev and Karrueche go to get Kharece's side of the story. Her and Brandon's mutual friend Nikki is there, who succinctly sums up what Kharece can't bear to admit because she's too in love with Brandon: he's a total douche who hooks up with her and is nice to her in private, but barely acknowledges her when out in public. And yet she still has hope that one day, Brandon will be her boyfriend. Could this be the first time the catfish has got it worse than the catfishee?

Back at Brandon's house, Karrueche asks him why he never actually told Kharece he wasn't interested in her. Apparently, he thought it was pretty clear, exactly in the way that having regular sex with someone would make it clear. Looking Kharece dead in the eye, in his most condescending tone Brandon tells her, "I do not have those feelings for you as you do me. And believe me, I know the way you feel." OK, I think she gets it, dude. Nothing anyone can say can convince Brandon that he's anything other than right to treat Kharece in this way, and she brought this all upon herself. I mean, yeah, she did, but Jesus. What a jerk.
Two months later

Brandon tells Nev and Karrueche that Kharece still occasionally messages him, but it's purely casual. He's still single, and probably will be until hunting season's over. Seriously, I could not dislike this dude any more.

And yet, I still can't help miss Max, despite his disappearing act. Maybe Kharece and I have a lot more in common than I thought.