I'm starting to feel like Nev is trying to drop subtle hints to Max about his disappearing act. After Max went on "holiday" now we have an actual ghost Catfish. Watch closely and you can see Nev slyly give Max the side-eye as they discuss this week's case of a catfish who suddenly disappeared and ceased all contact. When I eventually start my blog/self-help book (publishers are interested), I'm going to dedicate a whole chapter to "They're Not Dead, They're Avoiding You."

21-year-old single dad Michael was hoping love would fashion between him and Chanelle, a girl he had met on Instagram eight months ago. When they had tried to videochat, however, Chanelle was in complete darkness so Michael couldn't actually see her. Even though she was a student at his local university, she was always too busy to meet and then suddenly stopped responding to his texts and emails with no explanation. Had she run away, been arrested, or even been kidnapped? Or was she just ghosting him because she was obviously a catfish?
The hook

Point no.1 from "They're Not Dead, They're Avoiding You": rule out the worst-case scenario first and Google their name with "disappeared', "police" or hell, even "alien abduction". I will guarantee you will get no hits. Which is exactly what happens when Nev and Max do the same with the information Michael gave them about Chanelle. Because what a pointless episode this would have been had she actually been dead after all.

A Google image search shows that the pictures Chanelle has been using on Instagram are actually of a model named Ashley, so it's unlikely Chanelle is who she says she is. Why is it whenever catfish use images of models, the catfishee never spots them in adverts for hemorrhoid cream or something?

Using their magical phone number look-up tool, Nev and Max discover Chanelle's mobile is registered to a woman named Kym, whose daughter Stacey works in a hospital in the same town as Chanelle's university. Except Stacey looks like she's well into her forties; could Chanelle really be an OAP pretending to be a young model? It's almost never an older woman living vicariously through the internet – unless the victim's Nev, of course.

Going back to Chanelle's Instagram feed, Max gets the idea to see whom she's friends with to give them another avenue to go down. Sure enough, "larrya_95" has liked all of her pictures, although straight away they call her "Lareeya" and not what I would have initially thought, "Larry A", but if I started to poke holes in everything I saw, we'd be here forever. Like, how does Michael, a 21-year-old single parent who works in a drugstore, afford Eames chairs and expensive-looking wool throws? Come to think of it, Jaylin from last week's episode also had some rather tasteful mid-century furniture. 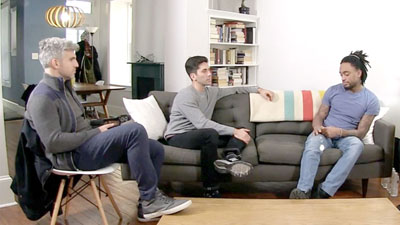 Does Catfish have a deal with Airbnb?


Anyway, Larrya or Larry A's profile shows she also attends Chanelle's university and is working at the same hospital as Stacey. Although Max was cut down last week when his theory came to nothing, he's confident that Larrya is behind the Chanelle profile.

Michael is devastated to learn that he's not been talking to Chanelle all this time, but Nev and Max don't have anything else to offer as to whom he was actually talking to. He doesn't recognise Kym, Stacey or Larrya so all that's left to do is for Nev to leave a voicemail on the number Chanelle's been refusing to answer for a month. Michael also suggests they DM Stacey and Larrya, in the hope one of them can lead them to Chanelle.

Later that evening, Nev receives a text, telling them that it's not Chanelle's phone and that this person doesn't want anything to do with this mess. If Chanelle had sold her phone or given it to someone else, then surely they would have told Michael weeks ago that it wasn't her number any more?

On the way to Michael's house the next morning with this new information, Nev gets a friendlier text from Larrya, saying she can help them out with Chanelle who is a good friend of hers. So is Chanelle real after all? It's time to head to the local park and find out.

Max is still positive that Larrya and Chanelle are the same person, and sure enough Larrya, and not Larry, turns up. She tells them she's known Chanelle for a long time and she stopped talking to Michael because she "had a lot of stuff going on". Did she have a boyfriend, or get pregnant or fake her death, asks Nev? Larrya refuses to be drawn, but drops a bombshell – she's brought Chanelle with her and she's sitting in her car, right now. This has the potential to be amazing: Chanelle's either a crazy old lady or an effigy made out of an upside-down bucket tied to a broom.

Max is gutted to be wrong yet again. "I was so sure it was going to be her." BASED ON WHAT EVIDENCE, MAX? You know nothing. Larrya returns with "Chanelle", who is in fact Christina, who also happened to date Michael for a short while when they were 16. And I'm guessing it didn't end well, as he refers to her as "that bitch". Charming.


Christina admits she created the profile to check on Michael after wondering about him after all these years, but since they only dated for two months it does seem a little creepy. Her vague plan was to woo him as Chanelle, and then swoop in as Christina, but she liked being Chanelle too much.

Despite calling her a bitch only moments earlier, Michael says he didn't have a problem with Christina and if she'd approached him as herself, he would have still talked to her. Christina doesn't seem too bothered, and in fact seems pretty pleased with herself. But why did they stop talking? Apparently Stacey had got fed up with Christina using her phone to text Michael, and even going so far as to reply as "Chanelle" late at night. It's left unsaid, but it means that Stacey was privy to all of Christina and Michael's private conversations. Ewwwwwwww! Michael says he's had enough, and storms off, leaving Christina to wonder why her plan didn't work out.

The next day, Michael refuses to take part in the post-confrontation confrontation so Christina only gets to tell her side of the story to Nev and Max. She was suffering from post-partum depression and after seeing Michael pop up on his brother's Instagram had a sudden urge to get back in contact with him. Is ... is the baby Michael's son? Nev and Max are too polite to ask. Christina is still keen to keep in contact with Michael, but after he called her a "psycho bitch" before getting into the car yesterday, Max opines that this might not be a good idea after all. It's clear Christina doesn't really feel like she's done anything wrong and is still clinging on to the fact Michael said he would have talked to her if she had reached out to him as herself. New blog post/chapter idea: "If He Calls You A Bitch, Then He's Not The One".

We're cheated of the usual Skype-catch up as an on-screen text informs us Michael's avoiding online dating to concentrate on work and his son: I'm also hoping he's planning on a career as an interior designer, based on his choice in soft furnishings. Christina has started a blog to help women with post-partum depression, although based on this episode she probably didn't give the best advertisement for it.