This week, Nev and Max met with 19-year-old Ray, who had never met his online girlfriend of four years, even though they only lived a few hours away from each other. Jesus, do we have to go through this sort of thing AGAIN? Why are the youth of today so stupid? Remember when it was batshit mental online vigilantes trying to catch out cheating boyfriends? I'm starting to suspect people are only applying to go on Catfish to get a free stay in an Airbnb. Unless there's a mid-century Scandi furniture craze sweeping the nation and a country-wide sale on off-white paint, something (cat)fishy is definitely going on.

It was definitely a shame about Ray. He was a cute kid, but obviously completely clueless; even some dick pics couldn't sweeten the deal with his online paramour Lexi, who refused to meet him despite them living relatively close to one another and blamed an old phone for not being able to video chat. Maybe it was because "Lexi" has some dick pics of her own she could have sent him?

The one thing that was intriguing, however, was that Ray had had some interaction with Lexi's sisters Alexia and Lexa. Lexi, Alexia and Lexa. Yeah, that sounds legit. Ray and Alexia had connected on Facebook, and Lexi admitted that Alexia had created other online profiles in a bid to catch Ray out and dob him in to her sister. Was there potentially a whole family of catfishes out there?

Despite her having a crazy family, Ray still wanted to meet Lexi and see if they could have a relationship. And possibly check into an Airbnb, courtesy of MTV.
The hook

TIL that Alexis is a pretty popular name on the internet. None of the profiles Nev and Max found seemed to match with the details they had, and they struck out with her pictures too, so they turned their attentions to her older sister Alexia instead. Her profile looked to be genuine, and she appeared to be dating someone called Jesse, so naturally Nev and Max called him. 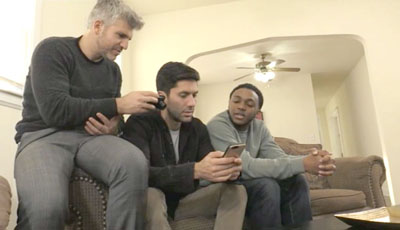 The ten-minute bit where Nev just played Candy Crush was a misstep for me.


At first Jesse appeared to be the breakthrough they were after, telling them that yes, he was in a relationship with Alexia. Only, they had never actually met in person. Personally I wouldn't consider myself to be in a relationship with someone until I'd snipped off a lock of their hair and kept some nail clippings as mementos/DNA evidence, but then I'm old-fashioned like that. Jesse had also heard of her sisters with the same name, but crucially, sometimes "Alexia" liked to be called "Lexi" or "Lexa". So ... "There's only one!" mouths Max, implying Lexi was behind all three accounts. And not Highlander. Obviously.

Ray is dismayed to learn that Lexi is also Alexia, and that she's catfished some other unsuspecting fool as well. They still don't actually know who Ray has been talking to, so Nev calls Lexi to arrange a meeting.

Unsurprisingly, Lexi has "a lot going on right now" so is reluctant to meet, although by now we do have actual confirmation that's she's female, so there's that. Nev points out Ray has a lot going on too. In fact, so does he, and everyone else for that matter. That's enough to change Lexi's mind, so I guess she received the booking confirmation email from Airbnb.

Nev, Max and Ray travel to Lexi's house/rental in Iowa. Because they haven't actually established who the girl in the photos is, anyone could open the door, but it's "Lexa", Lexi's other sister who apparently greets Nev. And it's so obviously Lexi/Alexia it's painful. Girl, we know it's you behind it all, but Lexa insists her sister ("not by blood") isn't home right now. I once tried a similar ruse with my mum when I was a kid, by putting my ponytail on the other side and pretending to be someone called "Rachel" to get out of cleaning my room, so I know what a risky game Lexi/Alexia/Lexa is playing.

As they drive off, Lexi calls Ray, saying she had just popped out to get some milk and Lexa was mad at her for not being home. She hangs up before Ray can pin her down for when they can actually meet, and so we're still stuck on this absurd merry-go-round.

The next day, Nev calls Lexi to convince her to meet again, and she invites them over to the house they were at previously. Is Lexi there this time? Well, yes and no. The girl in the pictures is definitely not there, but but Nev finally gets "Lexa" her to admit that yes, she is also Lexi. In fact, her real name is Marlyana, and she was behind all three of the sisters' accounts. Surprise! Anyone? Anyone?

Marlyana's living room is suspiciously camera-ready, devoid of any art but dressed with those pointless letters that spell out "Home", in case you ever forgot where you were. It's suspiciously neat and expensive for a 19-year-old who's just moved there on her own. Once again, everything is painted Airbnb white, so can we trust anything we see on Catfish? 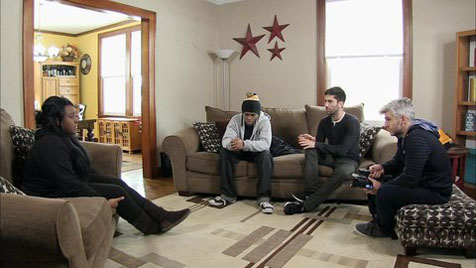 Who lives in a house like this? Seriously, who? I forgot her name.


Marlyana refutes the accusations that she created the accounts to fuck with Ray, trotting out the same old tired stories that she only did them to make herself feel better. I know low self-esteem and bullying aren't things to laugh at, but surely there's a better outlet than by playing with someone's feelings?

Added to that, Marlyana acts like the whole thing has massively inconvenienced her, rolling her eyes and looking up at the ceiling in disgust at every question. She can't even be bothered to follow the script and say she didn't mean for things to get so out of hand and she had genuine feelings for Ray until Nev presses her. At first she did like him, she says. But apparently after she grew out of her awkward phase, she found less use for using Ray to make her feel better and so just tried to blow him off. She didn't mean to hurt him though, so that's OK then.

Ray hasn't kept in contact with Marlyana, probably because he's worried about what happened to those dick pics. Marylana says she hasn't kept up with the fake profiles, and that the whole experience has made her a "better person". Better than what, exactly?

Next week, I shall be paying more attention to usual to everyone's choice in soft furnishings and asking Airbnb for either a slice of their advertising budget or 10 minutes alone in a room with Max and Nev where they can meet MY alter ego.