Charity alert: bid and take home ALL of the £10 Bargain Challenge DVDs

Some good had to come out of Luke watching Eyeborgs. After spending £50 on mostly terrible DVDs for our £10 DVD Bargain Challenge, we've decided to auction off the goods for charity.


Bats. Blood Gnome. Splat! In Your Face. Sherlock Bones. Eyeborgs. Mail To The Chief. Dish Dogs. Truly these are some of the most awful films ever made. And they could all be yours!

Hopefully you've been following our £10 DVD Bargain Challenge over the last month. Five of us (myself, Luke, Matt, Ed and Rob) set ourselves a challenge: spend £10 in a cheapo shop of your choice and buy as many rad-sounding DVDs as possible. The others rated the entrant's choices out of 10, and the highest scorer at the end of the competition won... respect? That doesn't sound right. I don't want to spoil it for you, but Matt won because he bought a film called Bats written by the guy who wrote Skyfall.

Anyway, now the competition is over and Matt is off enjoying his prize of a two-week holiday in Thailand (NB: this may have been his honeymoon, I can't really remember), we figured we'd put the accumulated 40 DVDs to good use and put them up for grabs in an eBay auction. Some of them are good, I promise. Rob laid a guilt trip on us for having to give back George Clooney's The American. Awww. 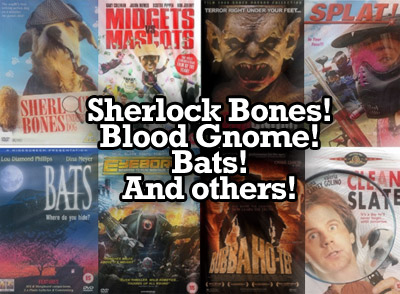 37 others, to be precise. Including Eyeborgs. EYEBORGS.


If you want to bid on the bundle - and we highly suggest you do - then click here to check out the eBay auction. It ends at 10pm on Tuesday 7th August and the proceeds will all go to charity so it's not like we're encouraging bad filmmakers or anything.