Earlier today I went to a 'breakfast' screening (1pm is still breakfast, right?) of Con Air at the Prince Charles Cinema in London's Leicester Square. It's still awesome, but in ways I never even knew before.


Hats off to the Prince Charles, they know how to make a cinemagoer feel welcome. Tickets to Breakfast Club screenings are only a few quid and you get free tea, coffee and doughnuts for your troubles.

(I'm not so keen on the pricing convention of their bacon baguettes, mind: £1.50 for a half, or £3 for a 'whole', despite the fact they only come in halves. When I asked the guy behind the counter if I should just take two halves seeing as I paid for a whole, he nodded but looked at me like I had just suggested sexual intercourse with his sister). 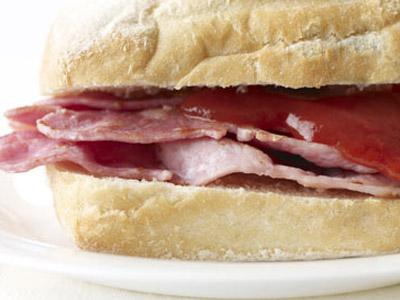 
Anyway: Con Air! Nicolas Cage is awesome, etc! Here are a few things I never really realised I loved about this movie (and I few I already knew).


Nicolas Cage is kind of awful

I always figured Con Air was one of Cage's better performances - in fact, if you'll consult the Nicolas Cage Matrix, you'll see it registers pretty high on the brilliant/mental quadrant. I guess I always thought Cage was 'in on the joke' and playing up the fact he's playing a hillbilly with a greasy mullet, but now I'm not so sure. Don't worry, though - he's still mesmeric to watch.

Take the opening montage that sees him read his letters to his daughter aloud. They're hilarious monotonous, almost to the point of parody. He's supposed to be pouring his heart out to the baby girl he never met, but it sounds like he's reading aloud his shopping list. The line about sharing "pink coconut things" with his cellmate is supposed to be a joke, but you wouldn't know it to hear Cage read it.

Towards the end of the movie, when Cage completes his transformation into vest-wearing, shit-kicking action machine, you do feel he gets into his stride a little more and nails down the tone. But then he's reunited with his wife and kid and 'How Do I Live Without You' plays and it all goes to Hell again. The Cage Matrix may need reevaluation.
John Malkovich is kind of brilliant

Everyone loves Malkatraz: it's been proven in labs. Rewatch Con Air and you'll see John Malkovich relish playing an out-and-out villain - I don't think I've ever seen him have more fun in a movie than he does here. He's done villains before (and since) but, as you can see below, Con Air scores highest on the Malkovich villain-o-meter:

You might question the decision by master criminal Cyrus 'The Virus' Grissom to un-cuff every prisoner on the plane without checking they're actually on board with his evil plan, but hey, he's lost his mind - at least, according to his last psyche test.
The supporting cast is AMAZING

This is what really elevates Con Air above other nineties high-octane fare (and, indeed, low-octane fare, although I've never heard a movie described as 'low-octane'). Check out this supporting cast.

John Cusack is... the college-educated US Marshal!
Colm Meaney is... the shit-heel DEA Agent with the fancy car!
Danny Trejo is... a Mexican rapist!
Steve Buscemi is... a freaky-deaky child-murderer!
Ving Rhames is... a black militant!
Dave Chappelle is... hilarious comic relief!
MC Gainey is... him! You know, that guy! From Lost!

Con Air is basically a time capsule for these guys (it's 14 frickin' years old) and few of them have been better since (with the possible exception of Steve Buscemi in Armageddon). The high concept of a prison plane overrun by convicts only really works if it's packed full of characters, and the crims are a colourful, entertaining bunch, down to the man. They all have brilliant 'con' names too, like Johnny 23, Diamond Dog and, er, Swamp Thing.

Also, IMDB reveals one of the extras was named 'Christopher Robin Hood' which is simultaneously the lamest and most awesome name ever.
The one-liners

Sure sure, we've all quoted "Put the bunny back in the box" and all had a giggle over how silly it is. But there's so much more to Con Air than mammal displacement: the script is bursting with shit-hot (and in some cases, just plain shit) one-liners. Very few of them belong to Cage too - it's not often an A-lister shares the spoils. Here are a few of the best. 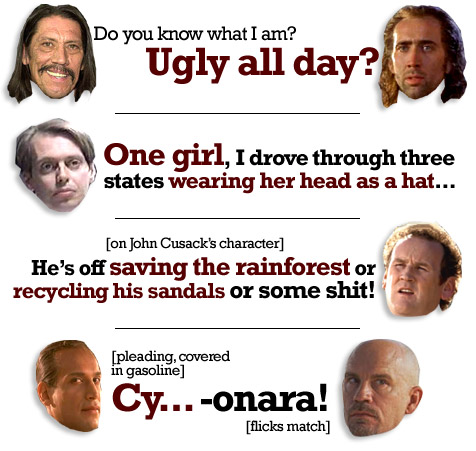 There's also a terrible, terrible line spoken by Nic Cage, when he meets John Cusack's character, who tries to strike a deal with him.

What does that even mean? Who's the other guy? Are we supposed to know? Ordinarily I'd brush it off, but at the movie's climax, when Cusack and Cage come together, put aside their differences and engage in an extremely manly handshake, Cage brings up the topic again:

And we never find out.
The action

It's really only when you go back and see the big action movies of the nineties that you see how totally fucking shoddy and incomprehensible the genre has become today. Modern action movies must come with Parkinsons-level shakycam, Tony Scott ADHD speed-cuts or what Michael Bay calls 'fucking the frame'. The result is almost always an audience that hasn't got a flying fuck what's going on.

Con Air doesn't have those problems. The action scenes are all really clearly directed, with geographically sound set-ups - at one point, John Malkovich's character even walks his cronies through the coming scene with a neat diorama drawn in the sand. Much appreciated, Mr Virus.

And shit, the octane level here is ultra-high. Simon West might be directing The Expendables 2 but he never really got his dues as an action guy, hitting his stride just as Michael Bay entered the scene. Con Air is about as good as action direction gets. The stunts all feel real, the explosions are rarely just for show and the characters are always in the thick of it.

Bonus points too for the awesome widdly-widdly rock soundtrack, complete with the lead guitarist who apparently follows Nicolas Cage around and starts fret-wanking every time he opens his mouth.
Frankly, Con Air couldn't be more nineties if it tried, but that's not half as insulting as I actually meant it to sound. In the pantheon of mid-nineties action blockbusters, it's easily up there with Die Hard With A Vengeance and Demolition Man, a movie which I can't believe I've never talked about on this site until now. Are you reading, Prince Charles? Sort your cinema out and get on it for next month's breakfast club.

More:  Con Air  Nicolas Cage  Prince Charles  John Malkovich  Simon West
Follow us on Twitter @The_Shiznit for more fun features, film reviews and occasional commentary on what the best type of crisps are.
We are using Patreon to cover our hosting fees. So please consider chucking a few digital pennies our way by clicking on this link. Thanks!