This is not a hit-piece on James Cameron. I love James Cameron. I think Terminator 2 is one of the best films of all time. I held the first screening of True Lies in London for 20 years. I cried at Titanic. I will vigorously defend the concept of the Avatar sequels to the hilt. But this is not a love letter to James Cameron either. This is a sternly worded warning to James Cameron that politely requests he stops encouraging, endorsing and/or making Terminator movies. I'm not angry, I'm just disappointed.


If the last three movies in your franchise were turds, newsflash: your franchise is a toilet. If I didn't know any better, I'd say that the creative forces behind the most recent Terminator movies are taking the whole "absolutely will not stop ever until you are dead" thing a bit too literally. Terminator 3: Rise Of The Machines was a charmless retread. Terminator Salvation was a toothless Transformers ripoff. Terminator Genisys was less pleasurable than shitting sideways. Three strikes and you're offline, fucker.

You'd think the combination of critical ire and commercial failure would be the vice that would kill the Terminator franchise for good, crushing it dead until that little red diode in its eye was extinguished forever. But no, there's James Cameron, building the pieces back together, putting the battery on charge and insisting that the new service update will be way better than the last one. Not to go all Sarah Connor - which is just as well because I can't do chin-ups - but the Terminator franchise needs to die for the good of cinema itself. How many chances do we give this shambling bucket of toss? If I can't have Demolition Man 2 then no one should be allowed another Terminator movie. 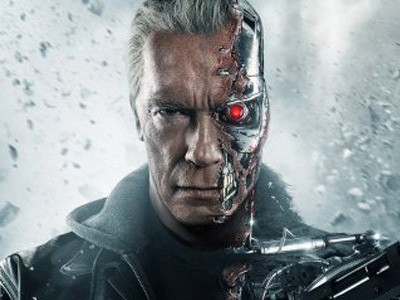 
And even though Cameron hasn't made a Terminator movie since 1991, make no mistake: he is absolutely complicit. He wisely steered clear of Rise Of The Machines, but he gave his blessing to Salvation and flat-out stanned for Genisys, saying, and I quote: "I feel like the franchise has been reinvigorated, like this is a renaissance... If you like the Terminator films, you're gonna love this movie." Yeah. Mm-hmm. Fascinating testimony.

T2 is being re-released in 3D this month, which is of course a cause for celebration. Hooray! One of the most visually exciting movies of all time in a whole extra dimension! Yay for Terminators! But with this re-release comes the inevitable depressing buzz about a sixth Terminator movie - because if you ask James a Cameron about it, he'll tell you it's coming. Boo for Terminators. "We're talking pretty seriously now about doing some new Terminator films or possibly a trilogy and you’ll just have to see what surfaces in those," says Cameron, conveniently ignoring the piles of still-smouldering wreckage just behind him. Terminator 6 will be the one to turn the franchise's fortunes around, just you wait and see! You'll all see! When the world is ash and Terminators are all there is, then you'll see!

Thing is, if anyone is going to turn the Terminator franchise around, it's James Cameron. Except... his pitch for Terminator 6 is legitimately one of the saddest, most ill-conceived pitches I've ever heard:

Now, the question is, did that person have some sort of meaning to Skynet on WHY they chose that one? Or was it like a whole rack of Terminators and the one that happened to be the Arnold model just happened to be closest to the door going out to the time displacement center and all the others looked different? I've asked myself these questions but it's never been resolved… so stay tuned!"
Phew. That's some lofty stuff. Answering the question 'Why does the Terminator look like Arnold Schwarzenegger?' is definitely going to require a whole new trilogy, and not just, say, an explanation of the fact that he looks that way because that's what Arnold Schwarzenegger looks like. Seriously, this is up there with prequel pitches like 'The Story of how Wolverine got his Leather Jacket' in X-Men Origins: Wolverine and 'How Leatherface Came to Acquire a Chainsaw' in that Texas Chainsaw Massacre origin story everybody is still talking about. Mysteries for the ages, explained at length so you can sleep at night!

Never mind that the whole movie would basically be a feature-length redo of this deleted scene from Terminator 3.

Just off the top of my head, here are five reasons that another Terminator movie is a bad idea:

- I know we've covered this, but the last three Terminator movies have each been worse than the one before. Encouraging further sequelisation flies in the face of logic. If you were an athlete and the last three times you posted got progressively worse, you would probably consider stopping being an athlete. Also, I forgot to mention, but in your last race you publicly shat yourself. Time to hang up your pooey running shoes.

- It's a spin on the old adage: a person is clever, but people are stupid - a Terminator is scary, but Terminators are silly. A sole murderous metal assassin pursuing an average housewife? That's frightening. An army of Terminators who can't get their shit together for long enough to set the date on their time machine back to a time before Sarah Connor or Kyle Reese or even the inventor of the handgun was born? That's a clusterfuck of robot twats. And because James Cameron is incapable of scaling down his ambition, there's zero chance of a back-to-basics Terminator reboot any time soon.

- Arnold Schwarzenegger is 70. Repeat: Arnie is 70. He literally has a pig's heart. If Arnold Schwarzenegger dies trying to pretend he's not 70 while performing a stunt on a shit Terminator sequel, I'll be out for blood. I blame his catchphrase. He should change it to "I'll be back, quality permitting".

- Every terrible additional movie that is added to the Terminator movie timeline makes the other movies on that timeline, even the good ones - especially the good ones - look retrospectively worse. This is not Lady Ghostbusters existing on an entirely separate plane from the unmolested Original Ghostbusters - this is actively damaging movie classics by allowing them to share a timeline with their own slack-jawed idiot step-children.

- There is no pre-written path for this franchise to follow - no last gasp Hail Mary that'll save the day. Here is the trajectory of the Terminator series to date: GREAT ORIGINAL MOVIE >> WORLD-BEATING SEQUEL >> CONFUSING BUT WELL-INTENTIONED THEME PARK RIDE >> MISGUIDED AND NOISY THREEQUEL >> UNDERWHELMING TV SERIES >> WORST SEQUEL YET >> ACTUAL EYE-WATERING CINEMATIC DEFECATION. There is no way back from this, no form book that suggests a comeback. If the Terminator franchise was your own broke-dicked dog you wouldn't encourage it to make more puppies, you'd take it out back and shoot it.

Take heed, James Cameron. Terminate the old Terminator talk. And if we really must abide by the godless capitalism that drives Hollywood and live in a world where franchises are never truly allowed to die, then do us the courtesy of waiting a few years - the equivalent of advising subsequent toilet-users to give it a few minutes - or at least wait until the skidmarks of Terminator Genisys have been scrubbed from the bowl. I can just as quickly turn on your Avatar sequels, you know. I've still got a few second-tier toilet puns left in the locker.

More:  Terminator  James Cameron  Arnold Schwarzenegger
Follow us on Twitter @The_Shiznit for more fun features, film reviews and occasional commentary on what the best type of crisps are.
We are using Patreon to cover our hosting fees. So please consider chucking a few digital pennies our way by clicking on this link. Thanks!