Die Hard Week: Why Sergeant Al Powell is the worst cop in the LAPD

They could teach him everything about being a cop except how to live with a mistake. And how to NOT SHOOT KIDS, AL.


Between all the frantic quipping, bloody feet and terrorists shooting the crap out of everyone, Die Hard has, at its heart, a... um... heart. And that heart's name is Sergeant Al Powell. The good-humoured, Twinkie-eating law enforcement officer who steps up to the plate in the face of life-threatening circumstances. Defender of the peace to an undeserving public, husband to a pregnant wife and, most importantly, trusted friend and confidante to the reckless, quick-tempered vigilante loner that is John McClane. Al's is a face you can find comfort in, a voice you can be warmed by and a gentle spirit you can let wash over you like a wave of good cheer.

SERGEANT AL POWELL
What the hell you talking about, man?


JOHN MCCLANE
Something had to get you off the street.

SERGEANT AL POWELL
What's the matter? You don't think jockeying papers around a desk is a noble effort for a cop?

SERGEANT AL POWELL
I had an accident.

JOHN MCCLANE
The way you drive, I can see why. What'd you do? Run over your captain’s foot with the car?

SERGEANT AL POWELL
I shot a kid. He was 13 years old. Oh, it was dark, I couldn't see him. He had a ray gun, looked real enough. You know, when you're a rookie they can teach you everything about being a cop except how to live with a mistake. Anyway, I just couldn't bring myself to draw my gun on anyone again.

JOHN MCCLANE
Sorry, man.
You're SORRY? Tell that to the mum of the kid that Al shot, McClane!

The funny thing is, in this tender moment shared between the two killers (now confirmed), Al’s genuine remorse and otherwise honourable conduct is almost enough to let the actual facts of his confession slip by.

So let’s reiterate: Al shot a kid because... he couldn’t see that he was a kid. So basically Al was blindly shooting at random shapes in the dark. The kid did, however, have a ray gun... which apparently looked "enough" like a real gun. Which is evidently a good enough reason to shoot a 13-year-old in cold blood. 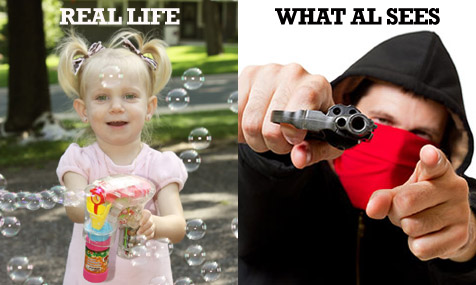 Where did this all take place, anyway? What did Al think the kid had done? The fact that these details are left out of Al’s tale seems a little too convenient to me. Almost like the end of that exchange should have actually been:

SERGEANT AL POWELL
I shot a kid. He was 13 years old. Oh, it was dark, I couldn't see him. He had a ray gun, looked real enough. You know, when you're a rookie they can teach you everything about being a cop except how to live with a mistake. Anyway, I just couldn't bring myself to draw my gun on anyone again.

SERGEANT AL POWELL
It's my own fault really. I should have known that a serial rapist wouldn’t have been hiding out in the middle of that children's birthday party. But I went with my gut...
Also, if you think about it, this single incident is enough to quieten even the most aggressive of gun rallies. Think how that kid's life might have been saved if he had only been tasered, or severely beaten with a truncheon.

And, by the way, Al shoots a child so he ends up behind a desk voluntarily? The LAPD didn’t force him to take that position? Or, y’know, FIRE him for killing children? This whole thing is bullshit.

More:  Die Hard Week  Die Hard  Bruce Willis  A Good Day To Die Hard  Reginald VelJohnson
Follow us on Twitter @The_Shiznit for more fun features, film reviews and occasional commentary on what the best type of crisps are.
We are using Patreon to cover our hosting fees. So please consider chucking a few digital pennies our way by clicking on this link. Thanks!