The current series of Doctor Who has been one of the most successful in recent years. The episodes have been pretty much universally praised by critics and fans alike, and the reaction to the latest incarnation of the Doctor, played by Peter Capaldi, has been unanimously positive. So why aren't I enjoying it as much as everyone else seems to be?


Sure, there's been episodes I've enjoyed. The most recent, "Mummy On The Orient Express", besides having the best title of any Doctor Who episode ever, was loads of fun. "Listen", the show's take on the old monster under the bed idea, was inventive, creepy fun, despite being a) not the instant classic all the reviews immediately claimed it was, and b) not a patch on Monsters Inc. But for the most part the current series has left me cold.

First off, I'm by no means a Doctor Who hater. Nor am I a massive fan. I consider myself to be a fairly well-rounded human being. Or as well-rounded as you can be when you spend your spare time writing articles about a show you claim not to care about for a website that's mainly visited by people who clicked on the wrong link on The Shiznit and ended up here by mistake.

I watched it growing up, and have been following it since its return nine years ago. I've never been passionate about it because as a kid I thought Star Wars was way better on the basis that lots of things blew up, there was a hot princess in a bikini and the aliens looked like aliens rather than BBC bit-players with tin foil stapled to their heads. Then when I hit my teens I decided Star Trek was way better as I thought it'd make me look intelligent, which would automatically make me more popular with girls. Needless to say I was sadly mistaken on both counts. But still I must like it a bit, as I keep watching it. Either that or it's because I've got kids, so I'm made to watch it whether I want to or not. 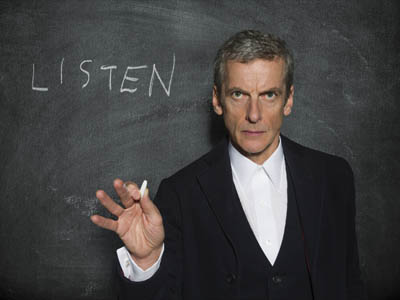 To what? This is a picture, you berk.


Basically, I'd like to think I'm fairly objective about Doctor Who, and can judge it on its merits. So why aren't I enjoying it any more? I've decided that it's either because I've outgrown it, it's genuinely not as good as everyone says, or I'm a misanthropic fucker who just dislikes stuff that everyone likes on principle. It's probably a combination of all three, but for the purposes of this article let's assume it's option two, purely because no one cares about how old I am, or my impressive collection of negative personality traits.

So what don't I like about it? It's not Capaldi. He's a great actor, who could grow to be one of the all-time great Doctors. Neither is it Jenna Coleman who, as Clara, is a fine, if slightly one-dimensional, companion. It could be Clara's boyfriend Danny Pink (Samuel Anderson), who's dull as fuck, but we'll gloss over that. The stories are also fine. Gone are the massively over-complicated scripts that plagued many of Matt Smith's adventures. Instead we've got intelligent but relatively uncomplicated stories simple enough that a child can understand. Or a (strictly hypothetical) adult who's spending too much time looking at Jenna Coleman and not enough listening to the plot.

But no, my problem with Doctor Who is this: it's just not fun any more.

The show is suffering from an identity crisis. It's now, alongside that
programme where they send three car-loving racists to various countries so they can laugh at Johnny Foreigner, one of the BBC's biggest exports. The problem with this is, in order to compete internationally, especially in America, it's lost its quintessential Britishness. It's aiming to be a big, respectable sci-fi show, and that's not what Doctor Who is.

Doctor Who has always been (and I don't mean this as an insult) a bit crap. There's nothing wrong with that. We British love things that are a bit crap. There's a reason Carry On films are still on TV every week. Or that Simon Cowell's got a career. Or that football's still our national sport, despite the fact we've been rubbish at it for the last 50 years. Hell, we're a country that goes batshit crazy about a programme where they bake fucking cakes for an hour every week. We live on a tiny island surrounded by lots of bigger, cooler countries (and Belgium), and consequently have a bit of a national inferiority complex. We don't like things that are too good. This is where Doctor Who fits in. It's a bit rubbish, but it's British rubbish. 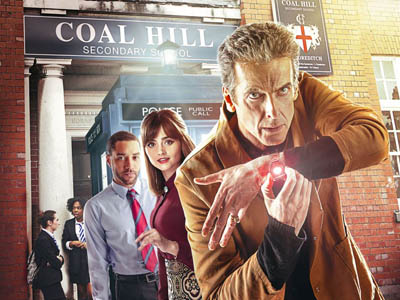 Once the red light dies down you'll see he's made his calculator watch say "BOOBS".


It's not even proper sci-fi. Genuine science fiction has a basis in actual science. Doctor Who's essentially a fantasy show about a mad old wizard in a magic box who flies round the universe fighting monsters. In terms of scientific plausibility, Doctor Who lives in the same fantasy world as the Wizard Of Oz and the Daily Mail's science reporting.

Only being a bit crap and implausible doesn't seem to be good enough any more. Doctor Who is now an international hit, and in trying to make it into a credible, international programme, the BBC have sucked the fun out of it.

It didn't used to be like that. Russell T Davies, who oversaw the Christopher Eccleston and David Tennant incarnations, understood that the programme was, at its heart, as mad as Ukip's party conference. So for every good episode, we got an equal number of silly ones featuring farting aliens, space rhinos, and Peter Kay in a fucking awful fat suit. Hell, he even hired Catherine Tate. Twice.

But those days are long gone. Doctor Who wants to be a proper, credible sci-fi show. And that's not what it is at heart. We still get the occasional fun episode, such as this season's "Robot Of Sherwood" (robots and Robin Hood), The Caretaker (the Doctor becomes a caretaker at Clara's school) or Mummy On The Orient Express (dunno) but it's not enough to just be fun any more. Even the fun episodes have to have an ulterior motive, usually exploring the Doctor's dark side (a recurring theme in recent years).

He's got a dark side; he's more interested in having adventures than saving lives. We get it: can we move on now please? But most weeks the fun is in short supply. Look at this year's other episodes – Deep Breath, Into The Dalek, Listen, Time Heist and Kill The Moon. Yes there's some impressive stories in there (with the exception of Time Heist) but how much fun were they? Even Ben Wheatley, drafted in to direct the first two episodes, failed to inject any life or humour into it.

And look at Capaldi. The guy was Malcolm Tucker, for fuck's sake. Here he's about as much fun as Alastair Campbell. Capaldi's a superb comic actor, so naturally he's been turned into the darkest incarnation of the Doctor to date. Obviously he delivers the one-liners superbly, but they're few and far between. Sometimes watching him makes you yearn for David Tennant happily twatting about. As with pretty much every major franchise going, the show's given in to the current trend for their heroes to be sullen and introspective.

It'd be easy to blame current head honcho Steven Moffat for the dour state of the show, but that'd be too easy. Obviously he has to shoulder some of the blame, but the show's bigger than him. Capaldi's possibly partly culpable, as the show's allegedly been retooled at his request. Christopher Nolan obviously, as it's his fault everything has to be dark and brooding nowadays. But mainly fault has to lie with the BBC. They want the show to be something it's not, as they believe that makes it more marketable abroad. 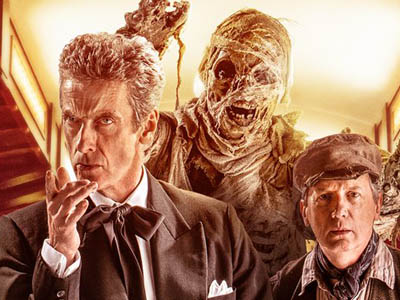 The Fantasy Football reboot hadn't really found its feet yet.


Moffat has come in for a lot of stick from fans in recent years, but he's one of the best writers the show's ever had. I'd say he was the best, if Douglas Adams hadn't written some episodes that I've never seen back in the 1970s. During Russell T Davies' era, Moffat's episodes stood out a mile. "Silence In The Library" is a genuinely brilliant, inventive story. Plus the man wrote "Blink", probably the best episode in the show's history. His first season, which introduced Matt Smith, was by and large a lot of fun.

But something's gone wrong. The next two seasons were, for the most part, damp squibs, offering us the likes of a pirate episode featuring Downton Abbey's nice Hugh Bonneville as the world's least convincing pirate, or a woeful cyberman adventure featuring Warwick bloody Davis as the emperor of the universe. It reached its nadir last Christmas with Matt Smith's last episode, "The Time Of The Doctor" - a meandering story which saw the Doctor spend hundreds of years defending a village on a remote planet against pretty much every alien in the universe, for reasons no one understood or remotely cared about. And, even worse, felt like it was being played out in real time.

Don't get me wrong, there were bright moments in there as well. The Neil Gaiman-penned "The Doctor's Wife" was fantastic, as was Moffat's 50th anniversary episode, "The Day Of The Doctor", which saw Smith and Tennant team up alongside John Hurt, who was roped in as Christopher Eccleston was off being all serious and moody somewhere and didn't want to take part. It was great fun, and exactly what Doctor Who should be: big, silly, and hugely enjoyable.

Obviously they can't do episodes like that every week. The BBC spent a fortune on the anniversary special, although still not enough to give Billie Piper elocution lessons. But that doesn't mean they can't be fun. Old-school Doctor Who was fun, despite having a budget that wouldn't cover the cost of Capaldi's eyebrow comb. Eccleston and Tennant-era Doctor Who was fun. Matt Smith's was for the most part, although how much of that was down to lively performances by Smith and Karen Gillan I'm not sure.

But Capaldi's era doesn't want to be fun. So far episodes this year fall into two categories. There's the dark and brooding ones, and the funny ones, which are used to highlight how dark and brooding the Doctor is. Now I'm all for dark and brooding - anyone who knows me will tell you I'm a miserable bastard - but this isn't what Doctor Who's meant to be. Would it really hurt them to lighten up a bit?

More:  Doctor Who  Peter Capaldi  Jenna Coleman  Matt Smith  David Tennant  Christopher Eccleston  Steven Moffat  Mark Gatiss  BBC
Follow us on Twitter @The_Shiznit for more fun features, film reviews and occasional commentary on what the best type of crisps are.
We are using Patreon to cover our hosting fees. So please consider chucking a few digital pennies our way by clicking on this link. Thanks!