Harry Potter Wizard’s Collection’s box set is out today, featuring 31 discs, extended versions, 37 hours of special features, 4 hours of never-before-seen content and a range of memorabilia. Buy it if you have a spare £200 and a space on your DVD shelf the size of a small car.


When asked if I wanted to review this momentous new box set, I said “Yeah, sure – I love Harry Potter from Mugwarts with the wands and the abracadabra and the unicorns and stuff”. And it’s true – I do. But I also thought that what would arrive would be a small, neat, compact box. After all, this is how it looks in the official picture. 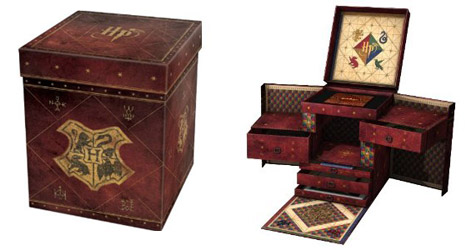 But then it arrived. And it was massive. And I had to carry it home. And it weighed a ton. The exact measurements are 32.4cm x 26.4cm x 28.6cm and it weighs 19lbs, but that’s just a bunch of numbers and when have numbers ever meant anything? No, I can tell you that the box is so heavy that I thought Rupert Grint himself was going to pop out of it and here’s a handy guide to the size and scale: 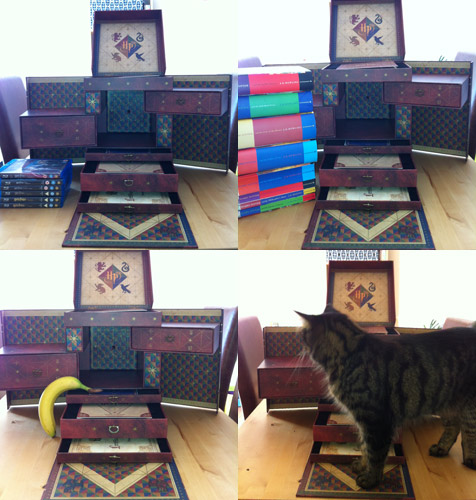 Now that’s out the way, I can tell you that this is probably the most comprehensive box set of the Harry Potter films that will ever be released. It’s all eight films; it’s got theatrical, extended and 3D versions; it’s Blu-ray, DVD and UltraViolet. And it’s in a BIG PRETTY BOX WITH DRAWERS AND STUFF. Take it from someone who owns a Jurassic Park Blu-ray box set featuring a T-Rex breaking through the park gates, this thing looks awesome.

It opens out and unfolds like an actual artefact from Hogwarts with cool compartments and surprise materials inside, although this is by no means a gimmicky box of tricks. Allowing for size and presentation, this is still an understated display set. There are no pics of Hagrid’s beardy smirk or Neville Longbottom’s surly pout on the side – it’s a coffee table purchase, designed to look damned impressive and even a little classy. Although, I hope you understand that your definition of what is classy may differ to that of a guy who owns a Jurassic Park Blu-ray box set featuring a T-Rex breaking through the park gates.

In any case, that’s nothing compared to the content on the discs. Here’s a rundown (in really a really small font so I could fit it all on this hilarious picture of Draco Malfoy): 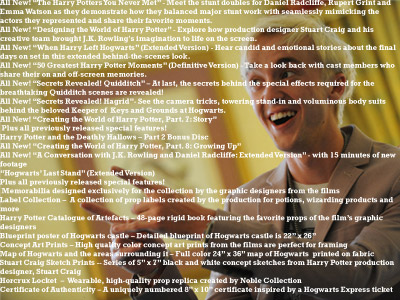 It's basically everything you can imagine


It’s safe to say that, stopping short of having J.K. Rowling’s brain itself at your disposal, you’ll never own a more thorough exploration of how these films were made, and how much work went into recreating these characters and settings on film.

In particular, an eight-part documentary spread out across each of the films entitled ‘Creating The World Of Harry Potter’ makes for fascinating viewing, with each segment focusing on a particular area of making these films. As you might expect, there’s a range of on-set interviews, behind-the-scenes looks, deleted scenes and featurettes on make-up, CGI, stunts, etc. The difference here, however, is that you get a real sense of the camaraderie and teamwork shared by everyone involved.

So, £200 may seem like a pretty price to pay for a box set of films that any self-respecting fan would already own all or part of. But then this is an epic release for an epic franchise that deserves such a momentous souvenir and, in terms of what you get for your money, this really is worth every galleon (it’s a Harry Potter currency thing – I looked it up). Just think, if you buy this, you’ll never, ever need to purchase another Harry Potter release ever again. At least not until Ultra-HD becomes a serious thing.

One word of advice though: get it delivered.

More:  Harry Potter  DVD Reviews  Daniel Radcliffe
Follow us on Twitter @The_Shiznit for more fun features, film reviews and occasional commentary on what the best type of crisps are.
We are using Patreon to cover our hosting fees. So please consider chucking a few digital pennies our way by clicking on this link. Thanks!