Just in case it wasn't clear, we quite like this show. 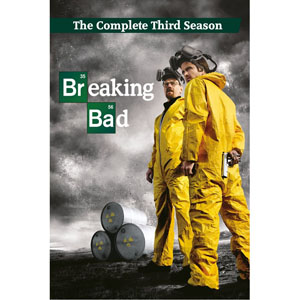 We're starting to catch up, here in the TV wasteland that is the UK. Nowadays we get Game of Thrones, Mad Men, House and The Walking Dead just a couple of days after they air in the US of States, and we don't have to close our eyes when we look at TV Twitter feeds from across the pond for six months to avoid spoilers.

The glaring omission in this is Breaking Bad. After four astonishing seasons in the US, the most recent of them last year, we've had the first two shown on various shitheel UK satellite channels, plus a quick run on Channel 5, all of them late at night and barely promoted. It picked up a word-of-mouth following among the download-savvy, but the news of a season three air date never came.

Until finally, out this week and packed with proper features, Breaking Bad season three is here on DVD, with the fourth to follow in October. No longer are we the crooked-toothed, bowler-hatted stepchild! Well, still a bit. 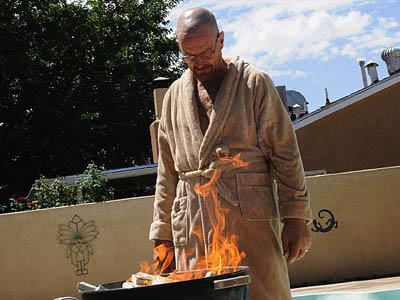 I burned all my possessions in the back garden in protest and FINALLY they listened. This included the DVD player though.

Season three kicks off in mystery, with two bald, suited, unspeaking brothers pitching up at a village in Mexico. Seeing that the locals are all slowly crawling towards something, the two get down and crawl too, till they reach a crude shrine, where they pin up a pencil drawing of Walter White in his 'Heisenburg' hat.

It has something in common, in straightforward WTF terms, with season two's opening use of the teddy bear eyeball floating in the swimming pool, which wouldn't be explained until the finale. Who these brothers are, and what they want, is similarly left unsaid for some time: we just have to wait. It's emblematic of Breaking Bad's overall approach. As a show it's never been overly concerned with your expectations of it, and certainly not with your preconceptions of TV traditions as a whole; it just does what it does and lets you catch up in your own time.

Throughout the season, we see Walt, who should be done with the meth business now his cancer's in remission and he has more money than he needs, lured back in by the simple size of the figure he's being offered. Jesse shows he can cook Walt's formula almost as well on his own, which causes problems in their twisted pseudo-father-son relationship, as well as putting Walt at risk of becoming disposable to Gus.

The conclusion it spirals towards is what they always term 'explosive' in trailers, and with good reason in this case. It's a towering achievement in TV, and one we Britishers deserve access to, having been denied it for so long. A basic human right, like, you know, freedom from religious persecution or whatever.

Did I mention you can win it here, too?

American Dad! - Volume Seven DVD
Tour of Duty - Season Two DVD
More:  DVD Weekly  Breaking Bad  Bryan Cranston  Aaron Paul  AMC  Netflix
Follow us on Twitter @The_Shiznit for more fun features, film reviews and occasional commentary on what the best type of crisps are.
We are using Patreon to cover our hosting fees. So please consider chucking a few digital pennies our way by clicking on this link. Thanks!